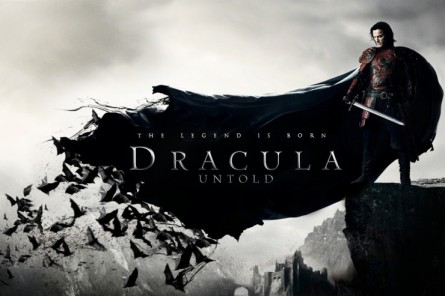 Luke Evans is handsome. Not bad for a Welshie.

Upon seeing the first major theatrical trailer (which I analyzed not too long back) I remarked that I would not expect brilliance from the film because something inside of me was certain it would not be an exercise in brilliance. Of course we talk at length about how it’s unfair and unwise to diss or to praise a film excessively before we are able to see it, but instinct is a powerful force within us. More often than not, when we see a trailer for a film, we always have an assumption that travels inside of us when we finally sit down to watch it. With Gary Shore’s directorial effort ‘Dracula Untold’ bequeaths us a fictional origin story for a fictional character, boasting a fantastical notion that Dracula was once a GOOD guy. Well. That accounts for something.

‘Dracula Untold’ follows Vlad Tepes, aka Vlad The Impaler (Luke Evans) and his refusal to bow to the Ottoman Empire’s wishes to send a thousand Transylvanian boys to fight in the Turkish sultan’s army. Vlad ain’t a big fan about this arrangement and he kills several Turkish emissaries to make it clear he ain’t nobody’s bitch. Naturally his defiance leads to ramifications so he takes it upon himself to travel into the Carpathian Mountains to seek out an ancient, insidious individual who goes under the name of ‘Caligula’ to help him out. Caligula (Charles Dance) grants him the power of ten strong men, the speed of a falling star and the capacity to strike terror into the hearts of his enemies but at a price- within three days he must overcome the Turkish army otherwise he will succumb to an immeasurable thirst for blood and be condemned to the night. He will become an immortal demon; a vampire. 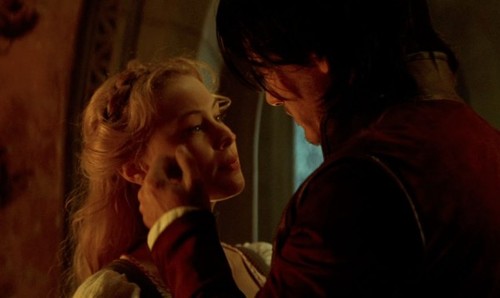 Lets’ get the obvious out of the way- ‘Dracula Untold’ tells a story that has been told time and again throughout history- the misunderstood villain who actually has good intentions. Earlier this year we were gifted (har har) with ‘Maleficent’ and now the King of Vampires is getting the same treatment. Vlad starts out as a loyal, loving and protective sovereign and family man with a loving wife and child and as time goes on he starts to wrestle with the curse/gift that has been placed upon him due to his own machinations. Vlad wants to do what is best for his people and his loved ones so he must resort to unorthodox and downright abnormal tactics in order to achieve his goals. So many story beats, character moments and moments in ‘Dracula Untold’ are ones we have seen countless times before.

If you are looking for a wildly fresh take on the Dracula mythos chances are you will be sorely disappointed. However, what saves the film is largely in part due to the central cast. Luke Evans as Vlad/Dracula actually makes for a compelling lead even though the script he was given is nothing revolutionary. He doesn’t just rely on his appearance to display the emotional journey his character is undertaking, he wisely chooses to incorporate more subtle acting devices, namely his eyes. There are occasions of which Evans does not speak or make any grandiose gesture- sometimes all of what he feels, all of his struggles can be seen through the windows to his soul. Sarah Gadon, so pale, beautiful and trusting as Vlad’s (first vampire bride?) Mirena lends an ample emotional performance as she and her husband struggle through this crisis. Dominic Cooper makes for a decent adversary as Mehmet, the headlining Turkish general who formulates a personal emnity with Vlad throughout the movie (with a dashing spray tan and kooky accent to boot). Truth be told however, I felt the character could have really been played by anybody who is more than halfway talented. Certainly not a knock against Coopers’ talent, but there is nothing that he does here that an audience hasn’t already seen in the past. Despite having a small role in comparison to the main trio of younger actors, Charles Dance as Caligula is a delight to watch. To me, Dance would just sit peeling a room full of potatoes and still be dazzling to me. The fact he still looks very good for his age astounds me too because DAMN he’s a fine grampa.

Although the story itself is rather by the numbers and generally predictable by conventional standards, it still tells its tale with enough conviction to at least show you that it cares. The way I see it, ‘Dracula Untold’ is more akin to a superhero genesis story more than anything else. That’s interesting considering this film is the first in a line of reboots/re-tellings of the old Universal horror monsters of the Golden Age and there is a plan to have them all be in a series of movies together. THAT sounds cool. However, based on what I have seen in ‘Dracula Untold’, a massive note I must give is if these folks want to turn this into a full-blown franchise, they NEED to not be afraid of pushing the mileage. ‘Dracula Untold’ boasts some impressive visuals, but it seems to forget that this is a film about Dracula. For a film about a man turning into a blood thirsty beast, there wasn’t a lot of blood. There is enough violence, but there is nothing particularly explicit about it. I feel if the film had wanted to be a little more daring in it’s approach to the character and the deeds he commits, a little more of the red stuff would have sufficed. I know, I sound like a gore-hound but I’m trying to be pragmatic for the future of this franchise because I WANT to it to succeed. It doesn’t suck but it lacks the certain bite a film about the legend of Dracula needs, especially in this age of sparkly vampires.

Gary Shore has still managed to deliver a mighty fine looking popcorn-orientated film with some nicely inspiring moments- a central example being the overall style of the film- it looks like a lush, Hollywood Gothic comic book with some nice means of Vlad/Dracula to exercise his burgeoning, developing powers of damnation. Although the usage of CGI in the film is prevalent, I didn’t find it terrible offensive and it did manage to help the story being told rather than hinder it. There are times in the movie that made me question the actions characters- there is an attempted dose of suspense being imposed on Vlad as his mortality counts down which comes off as practically useless since we ALL know what he becomes. I understand it helps give the man some moments of depth, but we all know the monster will arise by the time the credits roll.

All in all, ‘Dracula Untold’ is a decent time-sapper which doesn’t require booze and it isn’t boring, but chooses to play its cards safe. Come on folks, we know you can do better than this. This is DRACULA. He would want you to show his terror, menace and exploits in the way they were intended- horrific, relentless, supernatural, merciless, regal, animalistic and uncompromising.

By the way, considering the Mistress is currently in bad health,  a little something for her;