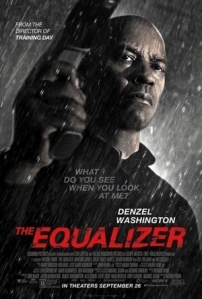 You know its interesting how in over the pass the 10 years, Denzel Washington has went from being an acclaimed two-time Oscar-winning dramatic actor (which he still is) to becoming one of today’s biggest action stars. Ever since his role in the late great Tony Scott’s terrific 2004 action film MAN ON FIRE, he has gone on to star in many other kick arse entries in the action genre (DEJA VU, UNSTOPPABLE, THE BOOK OF ELI, SAFE HOUSE, 2 GUNS etc.). Now Denzel is back with his latest action film, in which he re-teams with his TRAINING DAY director Antoine Fuqua to take on the big screen adaptation of the 80’s TV show THE EQUALIZER. Does this film deliver just as much as Denzel’s other action films have done in the past? Read on and find out!

The film tells the story of Robert McCall (Denzel Washington), a man with a mysterious past who lives a quiet life in the city of Boston. One night he meets and befriends a teenager named Teri (Chloe Grace Moretz), who works as a prostitute for some Russian gangsters. When McCall finds out that Teri is in hospital after a brutal attack, he decides to dedicate himself to protecting the innocent and seek vengeance against the Russian mob.

I should state before hand that I actually haven’t seen the original 80’s TV show that the film is based, so I’ll be judging it on its own as a film. So with that being said, what did I think of it? I can tell right now that even without having seen the TV show, I thought that this was compelling and very well made action film that I had a total blast with from beginning to end. I must admit that I actually wasn’t sure if the film would actually deliver, mainly for the fact that I’ve always found Antoine Fuqua to be a mix-bag as a director. While Fuqua’s non-action films have been great (both TRAINING DAY and the underrated BROOKLYN’S FINEST are definitely his best films), but I honestly found his action films to be either okay or forgettable at best (although, I did enjoy both THE REPLACEMENT KILLERS and KING ARTHUR).  I know that a lot of fans really loved his previous action film OLYMPUS HAS FALLEN (which you can read my review here), but I thought it was pretty average overall. So I wasn’t really all that excited for his involvement with this film but after watching it, I thought that he did a great job with it. This is definitely the best action film that he has made so far. It is very well directed and Fuqua does a terrific job with staging the film’s many memorable action sequences. Not only that, he handles the dramatic elements really effectively as well. Plus it also helps that he has a great actor like Denzel Washington in the lead role. 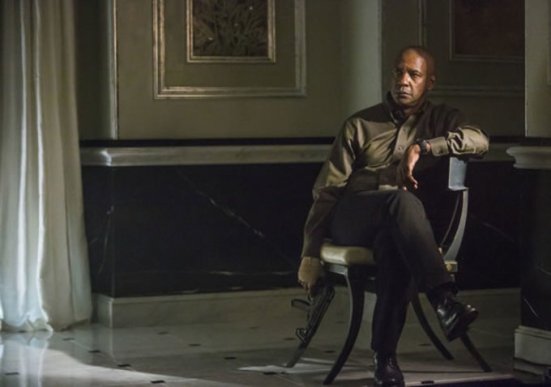 As you would expect, Washington gives another great performance in this film. In fact I would say that his role of “Robert McCall” may be the most straight-up bad arse character that he has played so far in his career, even more so than his role as “John Creasy” in MAN ON FIRE. What love about the character, despite being a total bad arse, is that he a very smart and honourable hero whose always 10 steps ahead of the bad guys (the way he takes out bad guys in this film is both sadistic and clever). In other words, he is guy who uses both his brains and brawn. There are some little touches that they added to “McCall” that make him a more well-rounded and compelling character. Also he is backed-up by a solid supporting cast. While Marton Csokas has a habit to be really over-the-top when he plays a bad guy role (you only have to see his work in THE AMAZING SPIDER-MAN 2 to see why), but I thought he did quite a good as the villain “Teddy”. The are some moments where he does play him a bit over-the-top as well, but luckily he does it with the right amount so that it never feels too cartoonish. In fact his performance can be rather creepy and intense at times too. Chloe Grace Moretz does a good job in the role off “Teri”. She wasn’t in the film as much as I thought she would be, but I thought she did well with the character in the scree time that she had. Also David Harbour, Haley Bennett, Bill Pullman, Johnny Skourtis and Melissa Leo (who funnily enough actually appeared in an episode of the original TV show) were all solid as well. Plus the script by Richard Wenk (who wrote other action films like 16 BLOCKS, THE MECHANIC and THE EXPENDABLES 2) is quite well written, Harry Gregson-Williams’ score was great and it has the most awesomely ridiculous ‘walking away from a explosion’ scene I have ever seen in a film.

Now in terms of negatives while I did think that the supporting cast were good in their roles, but I felt that some of them were rather underused. As I said earlier I would have like to have seen more Chloe Grace Moretz cause after the 1st act, she is basically sidelined for the most of the film. Besides her I wish both Bill Pullman and Melissa Leo had a bit more screen time as well (they were only in it for 5 minutes), but sadly they weren’t given much too and their characters could have easily have taken out of the film. Also even though the plot was pretty solid, it was still rather predictable (you can easily figure out where the story is going to go), the cinematography can be a little murky looking at times, the pacing can be a little slow in some scenes and it could have easily have been trimmed by at lest 10 minutes.

Overall while THE EQUALIZER doesn’t really add anything quite new that we haven’t seen other films of this genre before, but it’s still a compelling and kick arse action film nonetheless. Even though Denzel Washington has never done a sequel to any of his films, but I can see this film be the start of a successful franchise for him if he chooses to continue on playing this role. Cause seriously, I want to see more films with this character. If you are a big fan of action films, I guarantee that you are going to have a great time watching this film. Now bring on the sequel!