Based on the story by the same name by authoress Joan Lindsay, Peter Weir’s adaptation of ‘Picnic At Hanging Rock’  is a vague yet eerily disquieting gem of Australian New Wave cinema. This film isn’t about shock value or excess it’s exceedingly subtle, something that many people misinterpret as boring, but I assure you, when you watch the movie, in its entirety, it is not an exercise in meaningless drivel. It’s perhaps one of the most beautiful yet frightening things you may ever watch.

While everybody has a personal fear (mine is idiots with access to nuclear weapons, silly, right?), one of the few fears all of us as human beings share is the all-encompassing phenomenon of uncertainty. Uncertainty of each other, of the world. Not knowing what is to become of you is an eerie concept that all of us has thought about what stage or another. In the case of ‘Picnic’ the uncertainty comes from what happened to three school girls and their teacher who mysteriously disappeared during a beautiful summer day whilst on a high school outing. The film offers absolutely no conclusion as to what happened to any of them, there is only speculation and discomfort it is all a disturbing conundrum that only suggests that what became of the missing girls and their teacher; absolute oblivion. For a second, let’s just think about that word- ‘oblivion’. What exactly does it refer to? Nothing, because oblivion is The Void, the ultimate riddle that nobody can explain or solve, dare I say, a fate that exceeds death and transcends life. I must confess, writing this now dear readers, I am unsure of what to precisely say about this movie without being too vague and for some reason, I feel a little light-headed.

This movie only asks questions and reveals no answers, a fact that will divide us all, though one thing is for sure, no theory is too wild because of the way Weir translates the story. Upon further viewings, you may be tempted to follow some pretty obvious red herrings, but Weir is too intelligent of a film maker to spoon feed us anything, and you know what? It’s brilliant. Weir doesn’t underestimate the material he uses and he doesn’t underestimate his audience, he treats us all as equals in this case because we are all in the same boat debating as to what happened to the girls and nothing he does choose to share with us is condescending.

Visually, the film looks and sounds sublime, like sleep walking in the hold of an opiate dream with performances appropriate to the material to compliment it. None of the actors at the time were well known- in my opinion, it made their characters personable. Imagine if they had re-made this movie today and cast some of the world’s most bankable young stars. It just wouldn’t have the same effect on the piece. Here we are watching people who could have been you or me. 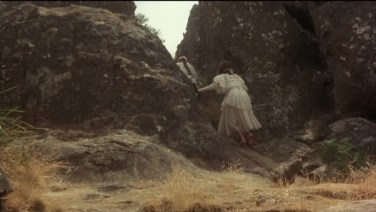 Naturally there will be folks out there who will argue and analyse tirelessly about other things we see in the movie- that it is a metaphor for sexual repression and anxiety (this movie does take place in the turn of the century), others may say that it is an allusion of feminism (such as the girls wandering out of the restrictive patriarchy that runs their school), others could be of the mind that it is a message about suicide, meanwhile others will just say “It’s just a fucking movie!”. The first two notions aren’t right nor are they wrong, and as for the third? This movie was made for an audience with a brain in their heads with every desire to use it. Don’t like it, fine, just don’t ruin if for those of us who use our grey matter.

‘Picnic At Hanging Rock’  is not just one of the finest films Australia has ever produced, but one of the finest exemplars of mind-benders to grace the screen. It is the perfect mystery without a solution and asks no judgement, only opinions.It is not pretentious, and while by all tastes it is not utterly perfect, all it merely asks you what happened and divulges nothing as whether you were right or wrong. So, will you come on this picnic, or will you stay at home with your nice and safe TV dinner?