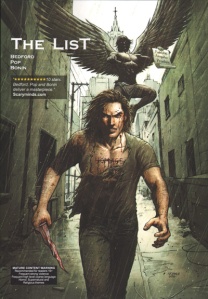 Here is a question that all of us have asked each other and ourselves- how far would we go to achieve what we desire? How much would we believe in the actions we took would benefit a higher goal? It’s a question every dimension has proposed to us since the dawn of human existence.

Paul Bedford’s confrontational, bold and fierce “The List” is another experience that asks these questions of the reader wearing a mask of unflinching violence that makes no apologies for what it says and and it implies. Not only that, the more answers the reader demands, the more questions they are forced to ask. What do I mean by that? Read “The List” and come and see…

A Father and his Son sit solemnly in a vehicle, as if frozen in the whirls of time, like austere statues. Silence reigns before The Son asks if his father if his list has been concluded. The Father affirms what The Son asks with darkened eyes and sombre face. He bequeaths the Son with “The List”, a sacred covenant that both of them unquestioningly believe is paramount above all things in the living plain, a tome delivered by the Angels of God Himself, a tenant that must be followed in order to achieve universal balance. The Father reveals he will no longer require it, as he is about to be enlightened through a spiritual transcendence known as “Ascension” of which he earns his place in the Holy Kingdom. It is now up to The Son to continue the legacy of The Father in order to obtain his Ascension. What is the Ascension you ask? To deliver wreckful and perverse retribution upon those who adorn The List with their names, regardless of how monstrous the act of sacrifice itself is. However, The Son makes a very grave mistake whilst executing his tasks that he finds himself in a distressing situation, one that makes him question his faith, his will and most importantly the legacy he has been given. How will this affect his path to Ascension? How will he ever find closure? How will God forgive his trespass if His wrath is so great?

Make no mistake, “The List” is a very difficult story to stomach- it goes head on with all types of taboo and controversy, every piece of violence you see is a whiplash across your eyes; stabbings, severed limbs, crushed heads, broken bodies, all done in the name of God… or is it? Let’s face it, despite the supernatural aspects that “The List” possesses in it’s pages, at the core it is all about the gullibility of human nature and how easy we are swayed to perform acts of cruelty all in the name of something that is intangible to others, in other words, religious killings. How many lives have been lost in the world due to one faction possessing enormous power poisoning the mind and will of thousands which result in wars and bloodshed all in the name of something so vague and and subjective? Bill Paxton’s excellent film “Frailty” dealt with this notion in harrowing detail where we never truly knew if what Paxton’s character truly was an agent of God or he was just an incredibly troubled mind. “The List” too offers no steady solution as to what you are seeing is warranted however extreme or just the machinations of The Son’s mentally unstable soul and if it is the latter option, are we still so inclined to support or condemn his actions? The consequences of blind faith come to a head in “The List” and it’s not a pleasant one by any means, but then again, how could we possibly expect otherwise?

Curse me for the Devil, but up until Marcey recommended “The List” I had never heard of Bedford and his work beforehand (my fault), so when she informed me of this particular work I was intrigued since the matter of religion is of great interest to me. I personally have nothing against any religion in it’s purest form- what doesn’t appeal to me is how people so bent by their own wishes can manipulate something so precious at the core to suit their own desires without any consideration for others. Although at first glance “The List” looks to be an unapologetic blood hose from Hell what with it’s episodes and forays into brutality and “don’t-go-there”, it urges you to look deeper past the black and white of the drawings as well as look deeper inside yourself. There is an immortal fable within this tale, and as you well know, fables were made to help us understand the world and to help form ourselves as people.

“The List” does not celebrate wanton violence or the narrow-mindedness of humanity, it discourages against it, it urges you as the reader to comprehend what you are seeing is a reflection of the world we all live in, and have at one point or another, helped to foster. Those who were offended by this work are those who have a very closely held notion of faith and are afraid that if they read further into this story, they will find themselves reflected in it, as if though looking through a mirror darkly. I don’t feel nobody GETS it, they just don’t WANT to get it and therefore have criticised Bedford’s work as being deviant and shocking for the sake of shock rather than the substance it actually has. However, if you are a reader who is unafraid to face the grim reality of the world, “The List” is yet another scathing, straight razor to the nerve endings about how much the world is in disarray due to the people who make it so all the while offering the necessary evil of psychological horror and torment in order to drive this point right into your soul.

It took Bedford nearly a decade to complete “The List” as it is now, but you can tell it was a decade filled with thought, consideration and a sizeable amount of the creative process thrown in. His story combined with the stark, eye-catching yet Spartan artwork of Henry Pop and Tom Bonin are (however darkly ironic) the Holy Trinity of this story. Although the artwork is simplistic and drawn in black and white, it serves the tone of the story, and most importantly the world the characters live in and the worlds they have created in their minds to suit their purposes. I feel that when this artistic choice is made, it means the creative crew are confident in their product, that they don’t need to rely on splashes of beautiful colour or intricate backgrounds to sell their universes. “The List” is confident in itself and it lets you know it without shame or reproach. It does not make any apologies for being what it is, it doesn’t hold your hand and coo sweet nothings when you are feeling frightened. It knows that is has the power to draw you in, to do it’s bidding… oh my, look what I just did there… bravo, Brother Bedford, bravo.

“The List” is dense with meaning and psychologically challenging affairs and intentionally throws you off-center with not only it’s approach but also it’s execution that refuses to be pinned down by your senses. Just when you feel you are able to decipher the deeds that are being done, “The List” delivers a series of revelations that will no doubt electrify and hurl you to the side like Jonah in the sea of the Whale. It is an inescapable piece of contemporary literature that will not allow you to put it down until IT is done and since there are more volumes to come, who knows when that will be? Come and see.

(A HUGE helping of gramercy to Marcey and Maestro Paul Bedford himself for their invaluable support and kindness for allowing me to publish this review on the site. Signors Bedford, Pop and Bonin- you are all twist-o, insane-o; let’s do lunch)