WOLF CREEK certainly took the horror world by storm, gaining popularity worldwide, and it’s killer Mick Taylor portrayed by John Jarratt became Australian’s horror boogeyman. The long awaited sequel has made it’s way on to DVD and Blu-ray here in Australia, after debuting to strong local Box Office back in February. Mick Taylor is back, and this time around he is the big star of the film, perhaps even more terrifying than before. He presents our most primal fears, and Mick is definitely one man no one wants to meet in Outback Australia.

John Jarratt on the other hand is quite the opposite of Mick, he’s one of Australia’s most well known actors. Having appearing in films and television shows since the 70’s, Mick is perhaps the role he is most famous for … that and his hosting gig on Better Homes and Gardens. John was kind enough to take the time out to have a chat with SuperMarcey.com and discuss both WOLF CREEK and WOLF CREEK 2, he even answered the fan submitted questions. Nothing is off limits with John, he speaks his mind with ease and definitely enjoys his craft.

WOLF CREEK 2 is available to own now through Roadshow, in both cut and uncuts formats. You can order it through JB Hi-Fi

John Jarratt: Hello, how are you?

Marcey: I’m good, how are you?

Marcey: Thanks for taking the time out to have a chat with me today.

Marcey: Very excited that WOLF CREEK 2 is now on the shelves.

Marcey: Yeah, it is pretty good that we get the uncut version as well.

Marcey: It IS. I went to the test screening last year and it was a lot more bloodier than what I saw when it came out in theatres in Feburary. Now I’ve got a few questions to ask you, I also have a few fan-submitted questions that I will ask you after mine, so be prepared for anything.

Marcey: So, how does one go from being on “Better Homes And Gardens” to becoming basically Australia’s big horror icon?

John: Well, you get off a script call of ‘Wolf Creek 1’ and you do it! (laughs) That’s how it happens. I don’t go looking for them, I just took what happened to be a horror film that just happened to go very well.

Marcey: Was it something that made you consider doing horror or was it that you just happened to like that script?

John: Nah, it just came down to taking the next really good script, I don’t really care what it is.

Marcey: I guess for some people like me, it’s just a little weird to know you from such a fun, family friendly show on TV to like (puts on a scary voice) a serial killer in a fairly scary movie.

John: Yeaaaah, getting a circular saw and chopping people up with it instead of wood!

John: And other tools!

Marcey: Yeah, you definitely had experience with all kinds of tools!

John: Since I was young I knew my way around a rifle, and a horse, car, truck… 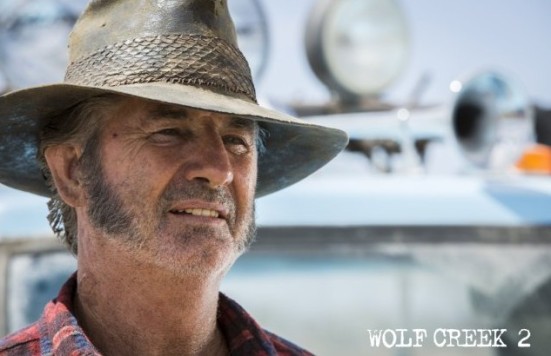 Marcey: All the right tools for the movie! So between WOLF CREEK and WOLF CREEK 2, did you have more character input the second time around? Input for the character?

John: Well, I had the character down the way I wanted in the first one, so I knew exactly who he was, what he was. It’s just that I had to do more (as Mick) in 90 minutes than say 40. He does pretty much the same thing that he does in WOLF CREEK 2- chasing people around, hunting them, cracks a few jokes (chuckles), playing a nice game, throw his car off a clif, take people into a shed… so it’s not that different really.

Marcey: I guess it’s because we see a lot more of him.

John: Yep. He’s a lot more in your face, it was bad enough the first time, but 90 minutes of the guy… but you know, that’s what the fans want. We just wanted to throw in a bit more money, make it a chase film and make it entertaining as well.

Marcey: Are you surprised the character really took off and became such an icon?

John: Well, I did think the movie would have been relatively successful, but I didn’t anticipate it being massively successful. You just don’t know. I read the script by Greg (McClean), who said it would be good, which it was. It definitely did a lot better than I thought it would. Let me put it this way; if we knew about how a movie would turn out, we’d make one every day. I’d be a rich man.

Marcey: Were you actually happy to come back to the role? I guess a lot of people were hoping that there would be a sequel but we weren’t sure of it.

John: Oh, we always knew we’d do a sequel, we just questioned the matter of when most of the time. When Greg was working on the second script, he invited me to sit in and asked me for my two bob (Australian slang for “Two cents” to our non-Australian readers!) It was a process, a big part about getting WOLF CREEK 2 together.

Marcey: So you’d be open to another chapter then?

John: Oh, absolutely. That’s not exactly up to me though. It’s really up to the audience so people don’t pirate all over the place and steal the film for nothing so we might have a chance of getting a profit. So tell your listeners or your audience to go out and buy the film.

Marcey: I’ve been urging people to check it out since I was allowed to talk about it after the test screening because it was awesome and I had a lot of fun. 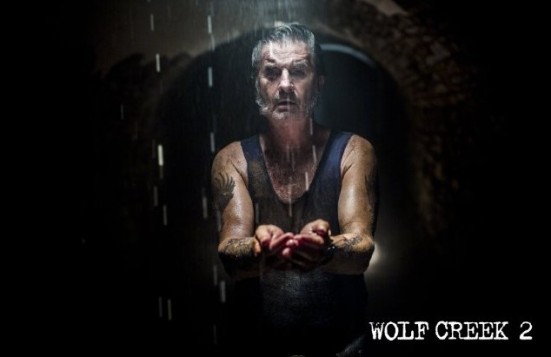 Marcey: (laughs) Okay, so I do have a silly question. A lot of my friends say that I could play Mick Taylor’s long-lost daughter. Do I take that as a compliment or an insult?

John: Uhhhhh, I dunno because I don’t know you, I haven’t seen you.

Marcey: I dunno why, though. It’s a little disturbing.

John: Are you a bit mad? I can’t comment I’m afraid.

Marcey: Well, let me put it this way; I enjoy watching movies like WOLF CREEK and anything that’s disgusting so maybe they think that and they say “Oh yeah, she could do that.” (laughs) I still think it’s a bit of an insult, I dunno.

Marcey: I should hope so. (John laughs) Moving off topic a little, I did speak to Aaron Sterns who co-wrote WOLF CREEK 2 and he said to me that you gave him so many ideas and input with novel, or the prequel novel. There was one thing in particular that really disturbed me. It was about a sexual act with a man and a calf. He said that it came from you. Can you confirm that it did?

John: Yeah, it did. The inspiration came from when I was a teenager and saw this grown man who had a mental problem having intercourse with a heifer, a cow.

Marcey: I… can’t imagine what that must have been like.

John: It was pretty sad, actually.

Marcey: Out of the whole book, that was the thing that struck the most with me. I just had to ask if that was true (the inspiration

John: Yeah, it was very sad. He was a little boy in a grown man’s body, I don’t know where he is now.

Marcey: I should hit you up with some fan questions. I did get quite a lot, so I’ll see how many I can get through. Randy from America asks if you are really creepy or is it just in the movie you are creepy?

John: I’m as creepy as Michael Douglas is gay.

Marcey: Very good answer. Another question from Glenn concerns ‘Savages’ Crossing’ . Is there any plans to follow that up? To do another film?

John: No, because the first one didn’t do very well, unfortunately.

Marcey: That’s a bit of a shame.

John: Well, nobody’s gonna give you money for a movie that bombed.

John: Yeah, I’d prefer to work on a movie based on something successful and personal.

Marcey: Let’s see, we have one from Daniel who asks “After the success of WOLF CREEK, were you offered a lot of horror scripts?”

John: Oh, I was offered a lot of horror, most of it was crap. I did do another horror in Oregon called SHIVER when I played an American dirty serial killer. So yeah, I have done on other horror since.

Marcey: I can imagine after that you were sent everything!

John: I’ve been sent a lot of strange stuff over the years.

Marcey: I have another fan question from Locky who wanted me to ask you about ODD ANGRY SHOT which was from quite a while ago. What do you remember when you look back on that film?

John: I remember that I worked with the best bunch of Aussie actors around in those days. Bryan Brown, Graeme Blundell, the amazing John Hargreaves who is no longer with us and Graham Kennedy, amazing TV icon and good friend. A really good cast.

Marcey: Absolute classic. I also have quite a few questions that ask how you liked being in a Quentin Tarantino movie.

John: It was amazing. He’s a film genius. Being on set with the guy, watching him work, it really shows you how to make a movie and at the same time he’s very in tune with the more intricate stuff. He really enjoys himself and knows exactly what he’s doing. He’s got an amazing wealth of film knowledge and he’s formed a genre of his own. “Quentinssential” is what I call him.

Marcey: Great term. Do you have anything currently in the works?

John: Yep, I’ve just finished directing and acting in a film called STALK HER and it’s about a bloke who breaks into a woman’s house where he’s taped up on the floor and tied to a chair and the rest of the night continues in this house. It’s like ‘Who’s Afraid Of Virginia Woolf’ kind of thing. My tagline is “He Chased Her Until She Caught Him”. That should be out in cinemas later this year, I hope.

Marcey: Mmm. That sounds interesting. I’d go to see that! But anyhow, our time is almost up, so thank you for having a chat to me!

John: Oh, well thanks for your support. I really appreciate it.

Marcey: So thank you again and I really hope WOLF CREEK 2 smashes again with sales. We need another one. One more Mick Taylor!

John: I hope nobody pirates it!

Marcey: They’d better not! Thank you!

One thought on “Mick’s Here! Interview with John Jarratt”