The Film: What would you do for guaranteed money? Just how far is too far? These are just some of the questions set before us in the debut feature from E.L. Katz. This horror, thriller and dark comedy goes to some very dark places within the human psyche, CHEAP THRILLS is a lot deeper than the name suggests. It puts the audience in a very awkward position, an uncomfortable one, yet one that is engaging and you certainly can’t look away.

Our film starts off with the introduction of Craig (Pat Healy), he has a loving wife and a 15 month old baby. He gets up one morning, finds an eviction notice on his door and then gets fired from his job (changing car oils). He goes to drink his sorrows at a bar, where he runs into High School friend Vince (Ethan Embry), who now works as a debt collector (the illegal kind). The pair begin drinking, and soon find themselves chatting to a rich couple Colin (David Koechner) and Violet (Sara Paxton). Pretty soon, Colin starts offering them money, betting them to do things, such as slapping a woman’s behind in the bar. The bets get more extreme once they get to Colin and Violet’s house, Craig and Vince find themselves in a situation that will test everything.

CHEAP THRILLS starts off fairly well, things look bad for Craig, and he’s immediately sympathetic. He seems like a nice guy, and he’s going through some really bad stuff with losing his job and facing eviction. The ante gets upped when we are introduced to Vince, and there already seems to be some tension in the air. Once Colin and Violet are in the picture, the tension is high, their characters just have something about them at isn’t trust worthy. Once the bets start, knowing the situation between Craig and Vince financially, you know they are going to go ahead and try win money. Getting back to Colin and Violet’s house, it becomes clear these bets are going to get a lot more hardcore. 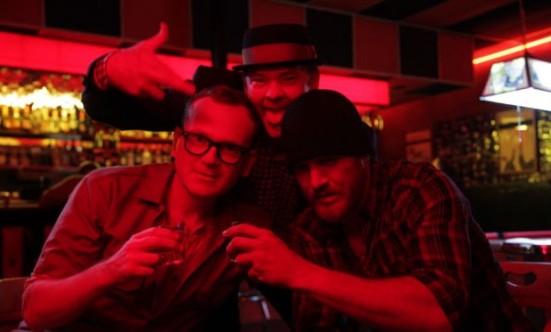 This is when the questions begin to form, and it forces the audience to put themselves in the situation. Would you take these bets? How far would you go before it’s too much? Who are the real morally broken people, Colin and Violet or Craig and Vince? By a certain point none of these characters have any dignity, what they will do more money, the risk they are willing to take or what they are willing to put people through is truly disgusting. Yet we just can’t look away at these things happens, and we can answer the questions the film puts forth. These are interesting questions, and smart ones too. This really brings CHEAP THRILLS up on a high level, it may be a gruesome film, but it is also very intelligent.

The cast here are all fantastic, each well suited to the character they play. Pat Healy has easily become a must see actor, he’s put in some fantastic performances over the past few years, and his name excites me. He’s very good here, playing a character that is easy to sympathise with, and he’s the one we don’t want to see in this situation. It is great to see how versatile he is as an actor, he’s completely different every performance. Ethan Embry is very much a low life, he’s all over the place and his character is quite the opposite of Craig. Embry is someone I have been a fan of for around 18 years, always playing different characters and never afraid to go darker. He’s almost hypnotic here, he’s not someone to sympathise with, but I couldn’t take my eyes off of him.

David Koechner is fantastic as the weird and sick Colin, he’s extremely charismatic, yet gives off such a creepy vibe. I’m a big fan of Koechner’s, and it is wonderful to see him in something so different, and become such a bizarre character. He really got this character right, hit all the right notes and really made it something special. Sara Paxton played quite a different role, she’s a lot quiet and strange, and this caught me right off guard. I really like what she brought to the table, and she rounded off the cast nicely.

This really is a top debut film for E.L. Katz, it’s crazy and intense and thought provoking. It’s wonderfully paced, each scene moves swiftly to the next, it’s not rushed and it doesn’t over stay its welcome. The script too is very clever, the dialogue works, and the actors have great reaction shots, the stranger things get. This is a very dark comedy, one that actually manages to balance the comedy well with how dark it goes. It is very successful with what it set out to do, a great achievement to say the least.

The Australian DVD
Audio/Video: The video is presented in 16:9 widescreen, audio is Dolby 5.1

The video and audio here is excellent, this is an exceptional transfer and I found it to be very clear and easy to hear.