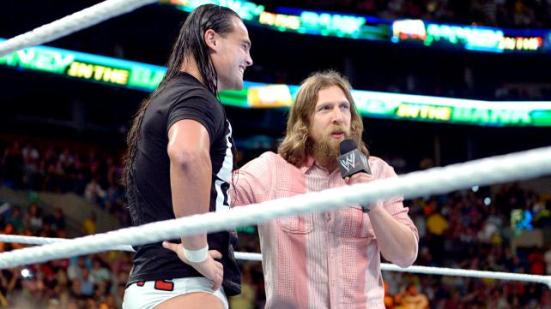 The Kick-off show on the WWE Network promised Daniel Bryan would be there to discuss his situation, and he came out to the ring with Michael Cole. Unfortunately Daniel Bryan did not bring good news, his injury is worse than first expected. One of his arms wasn’t getting full movement and he may need a further surgery. I believe this is the truth, because early word was he wasn’t healing as fast as they thought he would. At this rate there is no time frame for his return. My opinion, if he’s ready in a few months, keep him until the Royal Rumble and make him the winner. You know, what we didn’t get to experience this year.

The interview was interupted by Bo Dallas, who wanted to give Bryan some motivation. However Bryan stopped him by calling him a BO-ner, and Bo’s facial expressions were priceless. Bryan then told him to Bo Leave. Bo is getting a great reaction, and the crowd loved seeing Bryan again. Not the news we wanted to hear but great to see him all the same.

This was a great match to kick the show off with, it was fast paced and very exciting. The action was back and forth until Rowan and Harper got the upper hand. I had no idea who would win, I was positive we would see new Champions. But the more they dominated the more I started to change my mind, and think the Usos would pull off the victory. They did pick up a victory, and it was well deserved. Are they indeed keeping the titles on the Usos until they call up The Ascention and have them feud?

Major props to all four competitors, they did a fantastic show, and they really set the pace for the PPV. I do hope they get a few more matches in together, the chemistry is very much there.

I was very much looking forward to this match, I have been waiting for Naomi to get a singles push and to move away from the Funkadactyls gimmick. Sadly she has not split from Cameron yet, but it is looking like it will happen. This was a solid back and forth match, with a lot of intensity from both women. They did have a bit of a botch spot on the ropes but they picked themselves up and kept going.

The submission that Naomi had Paige in was brutal, and Paige sold it really well. Paige wound up with a clean victory, as I was expecting a jealous Cameron to interfere. That did not happen but Cameron showed she was happy that Naomi lost, and then tried to act like she cared about her friend.

Give Naomi and Paige a rematch, I would like to see them go at it again.

Who did Sandow piss off to get stuck with this gimmick? Not sure the crowd are behind it, but they might be if he was a babyface. I don’t really get it as a heel. This was a really good match, and probably the longest one that Adam Rose has had since getting on the main roster.

Sandow had the upper hand through most of it, and Rose then pulled off a victory. The real highlight was the hilarious commentary, as they were acting as if Sandow was actually Paul Revere! Not a bad match, but not entirely Pay Per View calibre, but at least we got to see these two.

Match of the Night hands down, this was a great match. Each man got to showcase their talent, RVD had some great spots, so did Jack Swagger. Kofi Kingston did his usual stuff, and he was very enjoyable. Dolph Ziggler had some memorable moments, and he really very strong. The match was definitely a great place to continue the Dean Ambrose and Seth Rollins feud, these two went at it hard.

It was very much about which one of these guys would pull off the victory and get the suitcase, the crowd were very much in support of Ambrose. At one point they claimed he had dislocated his shoulder and was taken to the back, but he came back out.

Spot of the match was Rollins going back first onto an elevated ladder, it was definitely a ‘Holy Shit’ moment. Thankfully he didn’t look very hurt after it, it was a spot that could have gone horribly wrong. Not too many crazy risks were taken, but it was a fairly intense match when the ladders were involved.

I had a feeling The Authority would interfere if Dean Ambrose looked close to getting the suitcase, and in fact I was correct. Kane came out when the returning Ambrose smashed Rollins up with a chair and then climbed the ladder. Kane ensured that Rollins grabbed the suitcase, and Triple H and Stephanie are thrilled.

Stardust and Goldust vs. RybAxel

First thing I noticed was that Curtis Axel has new ring attire, very similar to his father’s Mr. Perfect. A nice tribute for sure. This match was a lot of fun, great action, and we got to see more of Stardust and his brand new new set. This is not Cody Rhodes, he has completely changed and this is a great move. I could feel that Cody was perhaps not entirely happy, and he wanted a change. Doing this has been the best for him and he seems completely motivated once again.

I am glad we got to see this match on the show, I just want Stardust all the time now.

FINALLY a Rusev match that lasted longer than a few seconds, this was hands down his best match since being called up. Big E was a major threat to Rusev, and both he and Lana looked worried. There were times it seemed Big E might actually pull off the victory, but he just was short. Rusev eventually got the upper hand and as much as Big E put up a fight he eventually tapped.

I am glad we didn’t get much pre match talk, and the time was spent on the actual match. Rusev is a beast, he is extremely talented and he needs to be having actual matches.

This was the toilet break match, the beginning of this was stupid, but the women actually started to wrestle and got into it. I haven’t cared much for this feud except the fact that Layla has been on. I really don’t care for Summer Rae, she is fine in the ring, but she just doesn’t come off as a good person. Being the babyface does not suit what so ever.

I am glad Layla got a clean victory, and I do want to see her have actual matches in the division. Fandango didn’t do anything controversial either. 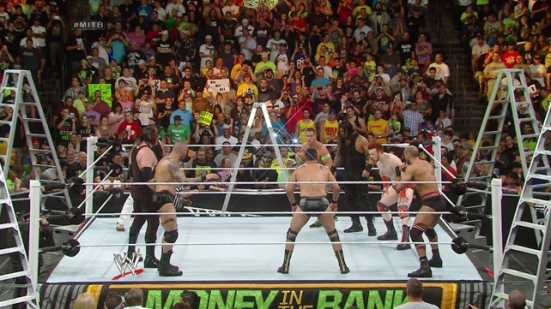 This was a great match, it had some really good spots and everyone worked their ass off. Most got to really showcase something and deliver their finishers. It did feel like it could go either way, and Sheamus came close a few times. Triple H and Stephanie were at ring side, and I was expecting Triple H to get involved.

Kane served as entity to help Randy Orton, interesting as Orton said he didn’t need help in an earlier backstage segment. Roman Reigns wound up basically destroying everyone and it did look like he was going to pull off the victory. But Randy Orton stopped him, Orton got a gash on his head and after a minute it really started bleeding.

Again Kane tried to help Orton win, but then Super Cena showed up, got rid of them all and won. WHY THE HELL WOULD YOU HAVE CENA WIN WHEN YOU CAN BUILD UP A NEW SUPERSTAR?

This completely pissed me off, I had a feeling he would but I thought maybe they would give it to Reigns. This is absolutely rubbish, but I know why, he’s the safe bet with Bryan out. I can’t imagine anyone except the young kids are happy with this out come. Reigns is definitely ready, hell Orton would have made sense too.

The way I see it, we need a Triple Threat Match for the Titles at Battlegrounds with John Cena vs. Randy Orton vs. Roman Reigns. Cena or Reigns would then defend against Brock Lesner. If it is Cena, Brock needs to demolish him, his win over The Undertaker cannot be tainted. Keep the titles on Brock until Wrestlemania. Have Brock Lesner vs. Daniel Bryan as the Main Event, the biggest underdog match. Bryan barely wins, and this will give him credibility for life. Perhaps have Rollins cash in on Bryan after that.

I am definitely curious to see where things lead come Raw. I do trust Triple H, but I do have the feeling Vince made the call for Cena to win.