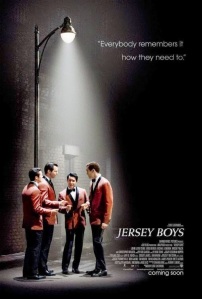 I know that I’m going to lose ‘man points’ for admitting this but I don’t care, I’m just going to come out and say it: I love musicals. Most guys would be embarrassed to admit it but for me, I’m not ashamed about it at all. I’ve been a huge fan of them ever since I was a kid and I always look forward to checking any out when they come my way. So you can safely say that I was very much looking forward to watching the latest one to hit the big screen in form of JERSEY BOYS, which was being directed by Clint Eastwood. Over the past 10 years, I’ve also become a fan of Eastwood’s work as director and I was curious to see how would tackle this film.

Based on the award-winning smash hit Broadway musical, the film tells the true story group of three young men from the the wrong side of tracks in Belleville, New Jersey – Frankie (John Lloyd Young), Tommy (Vincent Piazza) and Nick (Michael Lomenda) – who want to escape their lives from eventually working for the mob by starting a singing group. After performing a few gigs (and as well as Frankie changing his name to Frankie Valli) they meet an up-and-coming singer/songwriter named Bob Guardio (Erich Burgen). Together the four young men would form a quartet that would become of the biggest and most influential pop groups of the 70’s: The Four Seasons.

Now before I continue with my review there are two things I should state: 1. This is not a traditional musical where the characters burst into song any time, this is more in the vein of music biopics like RAY, WALK THE LINE, COAL MINER’S DAUGHTER etc. 2. I actually haven’t seen the original stage musical that the film is based on, so I can’t really say how this adaptation compares to it. But for what it is on its own terms, sadly I must admit that I thought that it was a pretty average film. It’s not a bad film by any means but when compared to other musicals that have been made over the last decade, it seems rather uninspired. It probably didn’t help that the script by Marshall Brickman & Rick Elice (who also wrote the original stage musical) pretty much covers every cliché that we have seen many times before in other music biopics in the past (the rough beginnings, the rise, the fall, the problems within the group, crime, family troubles etc.). Seriously, no cliché goes unturned during the course of this film. Usually that wouldn’t be a problem but unfortunately it wasn’t as engaging as it could have been. I think the reason for that is, and I hate to say this, is director Clint Eastwood. 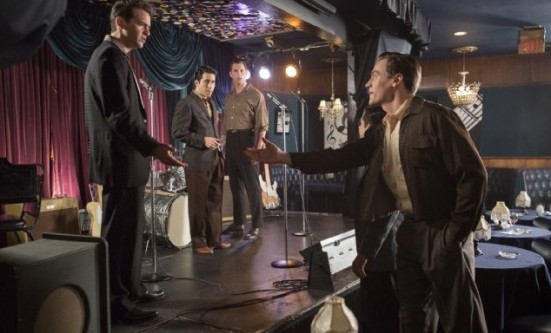 While I know that a lot of people have been mixed on Eastwood as a director between now and his 2006 masterpiece LETTERS FROM IWO JIMA, personally I actually really liked a lot of the films that he has made since that one. In fact I would say that some of them are really underrated (particularly CHANGELING and HEREAFTER, which I thought were quite under appreciated). But I must admit I don’t think he quite the right director for this film. Don’t get me wrong his direction here is fine but his trademark directing and visual style doesn’t really quite gel with the story. Even though I haven’t seen the original musical but from what I’ve heard, it’s a very enjoyable and toe-tapping show that’s full of energy. But under his moody direction, it lacks the energy it could have had to really pop onscreen.

His style worked on other music based films that he has made in the past like HONKYTONK MAN and BIRD cause it actually suited the tone of what both those stories were going for. Unfortunately it doesn’t quite work on this film, especially one that’s about a famous pop group (actor/director Jon Favreau, who at one time was attached to direct the film, probably might have been a better fit). Plus it doesn’t help that the film was a bit overlong and rather slow-paced at times. However I will say he’s staging of final musical number of “December 1963 (Oh, What A Night!)” was fantastic and chock full of energy that I wished the was more of that in the rest of the film.

However despite that, there were some aspects that I did like about the film. One thing I give Eastwood credit for is that, instead of getting famous actors to play the four main roles, he went after unknown actors instead (especially one who come from a musical background or had starred in a production of the stage show over the years). The four leads (John Lloyd Young, Erich Burgen, Michael Lomenda and Vincent Piazza) all do a good job in their roles and they all singing wonderfully (even more so for the fact that they actually sung live on set!). However the stands out for me were definitely John Lloyd Young and Vincent Piazza. Young (who actually played “Frankie Vallie” in the original 2005 Broadway production of the musical, which he also won a Tony award for) is definitely the film’s emotional centre and brings nice subtlety to his performance. Plus he does a fantastic job of capturing the singing style of the real Frankie Vallie. Piazza was great as well and he brings a lot complex aspects to the character of “Tommy DeVito”. 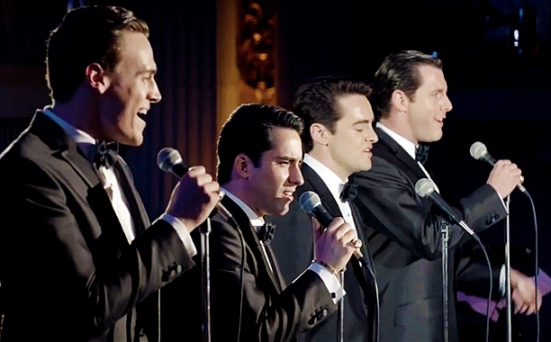 The supporting cast solid were solid as well: even though he is playing a character we’ve seen him play many times before, Christopher Walken still gives a solid performance in the role mob boss “Gyp DeCarlo” (he steals every scene he’s in) and I also enjoyed Renee Marino’s performance as “Frankie”‘s wife “Mary”, although I wish there was more of her in the film. Plus I really dug the Scorsese-esque approach to how they tell the film’s story by letting the four main characters break-the-fourth-wall and talk to the audience. Also the cinematography by Eastwood’s regular DOP Tom Stern gives the film a visually moody but classical beautiful look that I quite liked, the musical numbers were all really well done and the soundtrack (which consists of the Four Seasons most famous songs and other hit songs by other artists during that period) is fantastic!

Overall while there are a lot of really good things about JERSEY BOYS, but it’s not quite a good as it could have been and it’s nothing more than a watchable if rather average and forgettable musical. Also it’s definitely Eastwood’s weakest film as director for me since BLOOD WORK (but I will say that JERSEY BOYS is still 10 times better than that film). I’m sure fans for the stage show will definitely enjoy it but for everyone else who has an interested in seeing it, I’d say check it out at home  rather than at the cinema.