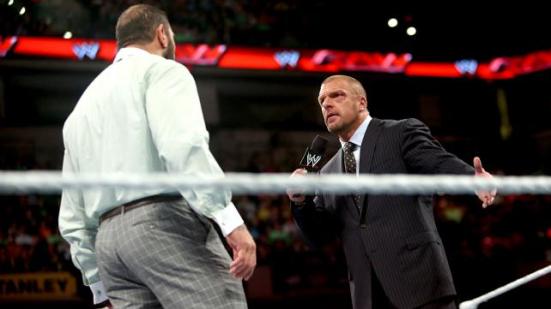 After a couple of incredible events, NXT Takeover and Payback, WWE had momentum on their side.  So last night’s Raw had a lot riding on it.  I’ll tell you right now this review will be a bit different as instead of watching it from my couch I was able to see it in person.  It is an entirely different experience, so my enjoyment will reflect that.

So we kick things off with a promo from Evolution.  They suffered a painful loss at Payback and were looking for vengeance.  Well, two thirds of them were.  Bluetista(Yes, we chanted them at him) wanted none of that.  He wanted a title shot.  When Triple H shot him down, Batista dropped the bomb and quit WWE.  So yeah, this night started off with a major event.  Pretty solid way to kick off the show. 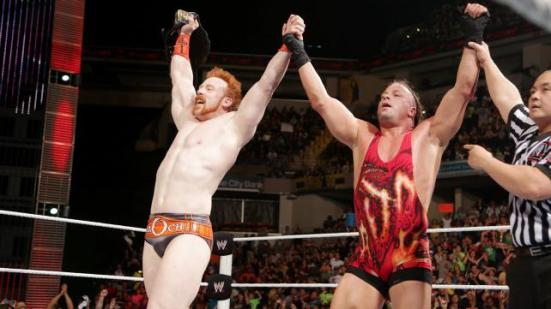 This was a fun and hard hitting match to start things off with.  Sheamus, Barrett and Cesaro brought extremely hard hitting, smash mouth action while RVD dazzled as he always does both flying around and with his kicks.  Cesaro ended up leaving after nearly getting his head kicked in by Sheamus, leaving Barrett to fend for himself.  That didn’t last long as Sheamus hit him with the Brogue Kick and RVD finished him off with the Five Star Frog Splash.  Really fun match that built on their matches at Payback.

Damien Sandow came out for his new “gimmick” which is whatever the hell works.  This week, he came out as Lance Stephenson(an Indiana Pacers player) and went on to show his “skills” with a basketball.  I don’t know how this turned out on TV, but it really worked live.  Indiana is a heavy basketball state and considering the Pacers were just eliminated from the playoffs it worked perfectly.  Big Show came out and had some fun with Sandow before he punched him right in the mouth.  The crowd was really into this segment. 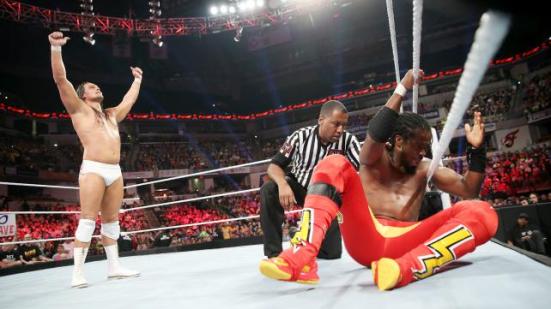 This was easily the best match Bo Dallas has had on the main roster and was one of Kingston’s best in quite awhile.  It was a lot of back and forth action with both of them getting great shots in and taking some damage.  Bo eventually won and got some good heat from the crowd with both his pre and post match promos.  It kept the energy flowing for sure.

This actually started off with a good promo between Stephanie McMahon and John Cena.  He chastised her for the way she was handling Daniel Bryan.  Apparently, either he defends against Kane in a Stretcher Match at Money In The Bank, or the title will be on the line for Money in the Bank’s Ladder match.  We ripped into both Steph and Cena until she made this match with Kane.

This match wasn’t special.  It ended with Kane getting DQed pretty early.  After the match, there was some ringside shenanigans.  That’s really about it.  One thing, Kane’s pyro is REALLY hot throughout the arena.  I had good seats and it hit me, well, like a wall of flame.

This match was short and sweet.  The best part of it was Hornswoggle coming out in an afro wig only to have it removed by El Torito during the match.  What was really funny is that Hornswoggle has made no attempt to even out the haircut so he still looked like an unmasked Jason Voorhees.

Yeah, I hate to be a stereotype but I went to the bathroom during this match.  Was told it was exactly what I would expect.  So I have no real comment for it.

Adam Rose may not have been too terribly over with the crowds before Monday, but by God he was in Indy.  The crowd ate his act up and enjoyed the hell out of it.  The match itself was a mix of comedy and some actual wrestling skills.  Adam Rose got the win after hitting the Party Foul(which looked really cool in person).  Can’t wait to see more from Rose.

The Wyatt Family vs. The Usos

Originally I was disappointed by not having Bray Wyatt come out and cut a promo.  Then Luke Harper cut a truly creepy promo of his own and I was happy.  His mic skills surprised me, he’s not just a brute of a man.  And then came the match.  Oh man, did this match ever live up to the potential!  This was easily my favorite match of the night.  The Wyatts are FRIGGING HUGE in person!  I knew they were big, but damn!  Their brutal style mixed well with the Usos and I honestly thought it could go either way.  The Wyatt Family picked up the win with a brutal Uranage Slam from Erik Rowan.  I can only imagine they are the new number one contenders for the Tag Team Titles.  I want to see that more than ever now.

If it wasn’t for the previous match, this one would have stolen the show.  These guys never disappoint.  This was as high paced as you would imagine from these guys.  With a spot in Money in the Bank on the line, it helped make this match feel even more important.  Del Rio finally got the win with his Cross Armbreaker after a series of counters from both men. 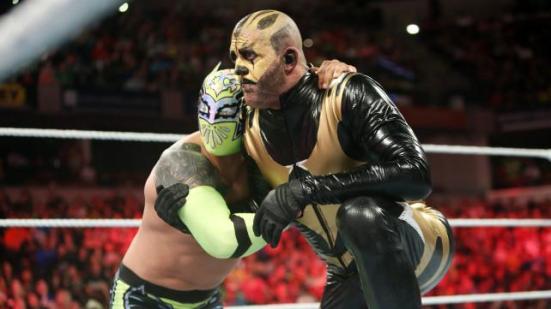 Yet another good match followed that up.  Playing off of the angle set up at Payback, Cody Rhodes found a replacement for him in the Brotherhood.  And to their credit Sin Cara and Goldust had great chemistry together.  Both teams were very solid in fact.  Unfortunately, it wasn’t enough for the win as Rybaxel continued to roll through competition.  Still, it was a lot of fun seeing Goldust prove that he’s the best he’s ever been.

The Shield cut a promo to start this off and it was very solid.  They were still riding the wave from Payback and it showed.  Orton came out with Triple H and Triple H’s sledgehammer.  The COO said it was time for plan B.  After he said that, Seth Rollins started beating the holy hell out of Dean Ambrose and Roman Reigns with a chair!  And when I say he beat the hell out of them, he broke down two chairs on them, even hitting his curb stomp on Ambrose onto a chair!  That whole scene stunned the arena.  Now, I’m proud to say I was there when the Shield debuted at Survivor Series 2012.  It was the same arena in fact.  But now that I’ve seen what may be the end of the Shield, I got to say I never saw it coming from Rollins.  This one event alone was a game changer from here on out.  WWE is not the same.