The Shield kicked off Raw ready for a fight.  The cut a promo promising to hunt down Evolution as soon as they arrived.  With some wickedly perfect timing, a limousine was shown on the Titantron with the three members of Evolution appearing from within.  The Shield wasted no time as they immediately left the ring and ran into the back.  As Evolution cockily made their way through the back of the arena, The Shield attacked.  After dishing a beating, The Shield was pulled off of them by a large group of backstage personnel and Evolution was left on their asses.  This was a solid way to start the show and made the Shield look pretty dangerous. 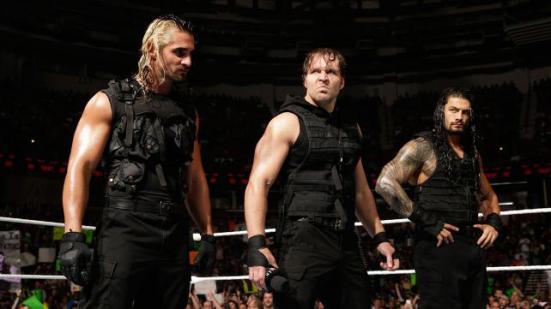 Zeb Colter began this by adding Adam Rose to his deportation list.  He wondered why Rose would hang out with people in bunny suits and other such oddities and warned him to stay away.  Of course, this brought the party out from the back.  The bell had already rang while Rose and his party distracted the hell out of Swagger and Colter.  Swagger took a swing but missed as Rose fell back onto his party and crowd surfed around the ring.  Van Dam wasted no time kicking the taste right out of Swagger’s mouth when he turned around.  After his patented Five-Star Frog Splash, RVD celebrated his victory.  I love Adam Rose’s gimmick.  It just screams fun and I can’t wait to see him in a big WWE town where he will be over like crazy. 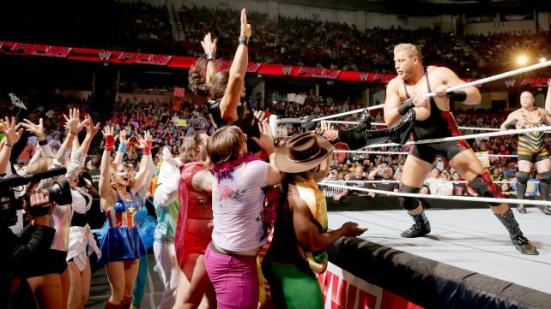 This match surprised me.  Paige played the underdog while Fox gave hands down her best performance since joining WWE.  Alicia Fox dominated the match until a surprise Paige Turner put her down for the three count.  Afterwards, things turned a bit bizarre.  Fox flat out lost her shit.  She started destroying the ringside area, spraying down the crowd and JBL with his energy drink before stealing his cowboy hat and dancing around as she left.  Never saw that coming, but I liked it. 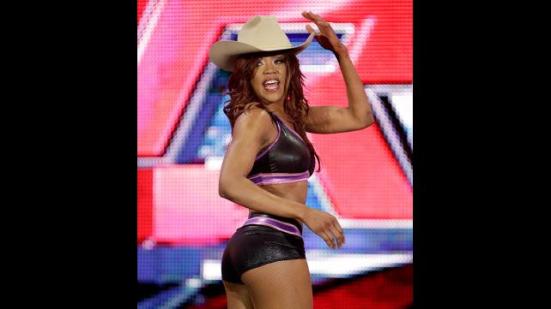 Okay, this segment really surprised me.  Out of nowhere, Bryan announces that he will be having neck surgery on Thursday.  I did some research and this seems to be legit.  Not too surprising considering his style of wrestling can be extremely dangerous.  He ended the promo by promising he will be back.  I’m hoping the best for him.  The man has been through a lot the past month. 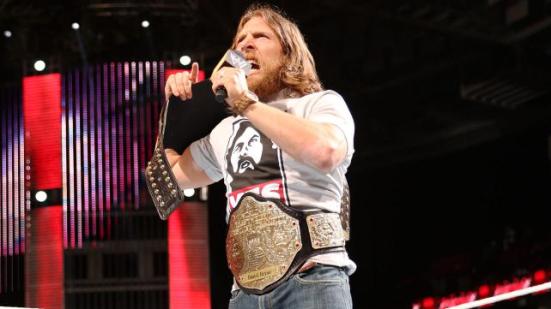 The Wyatt Family vs. John Cena and The Usos

In a rematch from Smackdown, Cena and the Usos took it to the Wyatts.  This was another solid match from the six men.  It honestly seems like these guys are incapable of having a bad match together.  Unlike their match on Smackdown, Cena and the Usos picked up the victory after an Attitude Adjustment to Erik Rowan.  I could watch these guys go at it any time.  The fact that they are trading victories makes a lot of sense, as it becomes a lot harder to predict who will win this feud even if Cena is involved.  A bit later in the night, Wyatt challenged Cena to a Last Man Standing Match at Payback.  Cena will respond on Smackdown.  That match should be absolutely brutal. 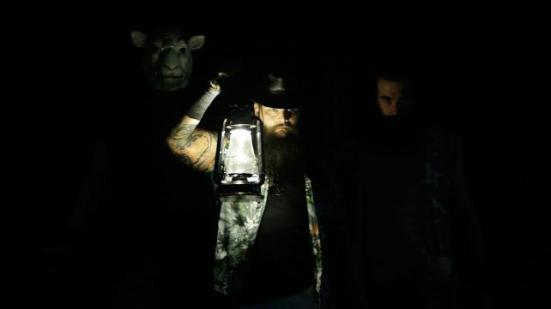 Evolution’s Response To The Shield

The three men of Evolution came to the ring and spoke about how it’s finally time to put the Hounds of Justice to sleep.  They went on for a little bit, bragging about what they were going to do to The Shield, when out of nowhere The Shield struck.  Once again, The Shield got the better of Evolution.  Batista had finally had enough and challenged Roman Reigns to a match later, which Reigns gladly accepted.  I don’t care who The Shield is in action against, they always put on a clinic.  This is going to be great! 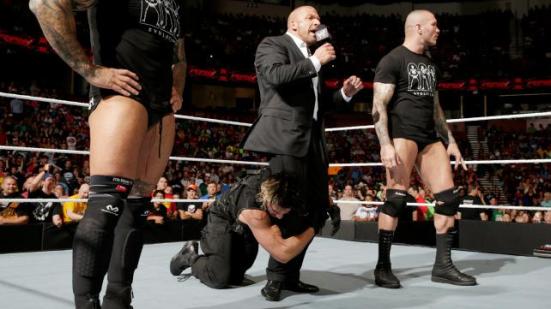 In the essential time waste of a match, Natalya took on Nikki Bella.  I’m not sure what caused this match, but what I got out of it is that Bella made fun of a painting that Natalya painted for her.  Whatever.  The match was sloppy, which is sad because while the Divas have been getting a lot better, this match was just ugly.  Not even Natalya could save it from awkward botches.  The other divas from Total Divas were outside with Olympic scorecards, which really made no sense to me.  Nikki won with an ugly victory roll.  Natalya tore up the score cards and pouted her way to the back.  Waste of time, but mercifully it was short. 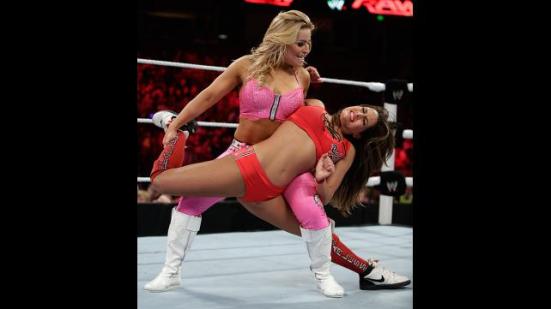 This was actually two seperate matches, but I’m going to list them together because of how well they came about together.  It started with RybAxel flipping a coin to see who would face the US Champ.  Axel won and went on the attack.  He was doing very well against the Irish brute, but eventually Sheamus locked in the cloverleaf which forced Axel to tap out.

Ryback immediately attack Sheamus and challenged him to a match.  This was hands down the best singles match Ryback has had in a very, very long time.  He and Sheamus slugged it out, trading power moves and just unleashing a smash mouth brawl.  I loved every second of it.  Sheamus used his under appreciated agility throughout the match, to make it a lot more exciting.  In the end, Sheamus landed a Brogue Kick and got the 1,2,3.  This was a very solid match that made all the competitors look good and helped give a bit more respect to the US Championship. 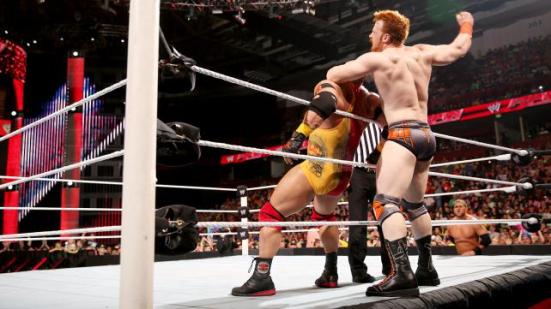 As expected, Steph came out and said to the Universe that she was right all along, that Bryan couldn’t cut it as an A player.  As she called Bryan out to the ring so she could presumably strip him of the title, Kane’s pyro went off.  He dragged a heavily beaten and unconscious Bryan out on the ramp.  Brie Bella, Steph and medical personnel surrounded and attended to Bryan, eventually taking him out by ambulance.  Before they took off, Brie shoved and yelled at Steph.  Steph had a subtle, yet evil look on her face as the ambulance left.  I’m not sure where they are going with this, as the injury appears legit.  I’m anxious to find out more about this feud. 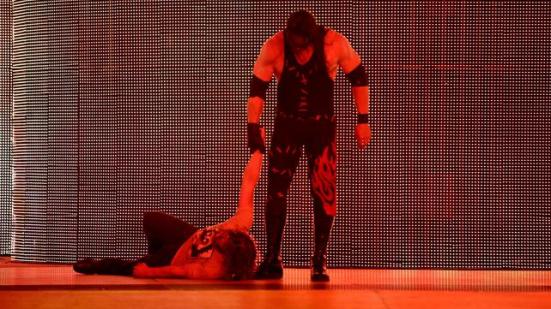 This was a fast paced and fun match.  These two went back and forth with a lot of high impact movies.  Eventually, Layla attempted to distract Ziggler, but it backfired and ended up costing Fandango the match with Ziggler hitting the Zig-Zag.  After the match, Fandango said it didn’t matter because he loved Layla.  JBL was hilarious on commentary as Fandango and Layla made out, screaming that his mother watches the show and nobody wants to see that.  Nice touch.  The match wasn’t long and it was a bit better than the Fandango/Santino feud.  Hopefully, we are about done with that. 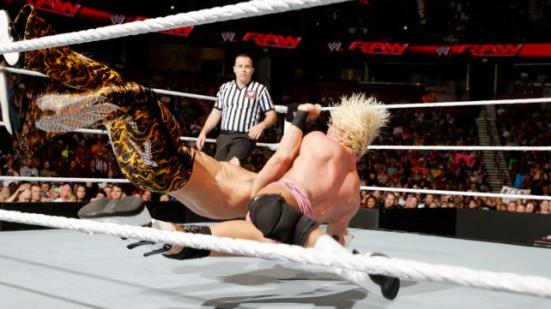 Hacksaw came out with his 2×4 to promote Legends House on the WWE Network.  If you haven’t checked that show out, you really should.  It’s wickedly entertaining.  His promo didn’t last long before he was interrupted by the Ravishing Russian, Lana.  She went on about Vladimir Putin for a bit before bringing out Rusev.  Lana gave Duggan a chance to beg for mercy or Rusev would destroy him.  Hacksaw of course was having none of that.  Rusev then impressively took Duggan’s 2×4 and broke it over his knee.   Right as he was about to attack the Legend, Big E came out to defend Duggan!  Rusev put a quick beating on him and Duggan checked on Big E.  I’ve been hoping Rusev would get a step up from the typical squash matches and it seems WWE heard my cries.  Mixing up Rusev with Big E should be a fun matchup with lots of great moments. 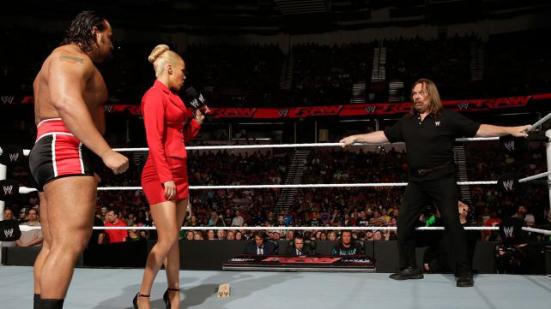 Apparently, Sandow went off on the Raw Pre-Show with a sort of pipebomb promo.  I didn’t see it but it seems he continued his rant at the beginning of this match, before Rhodes entrance music cut him off.  This was another good match that saw both guys hit a lot of offense and look good.  Rhodes showed signs of a heel turn by raking Sandow’s eyes before hitting his Disaster Kick for the victory.  I’m really curious to see what comes from this for both competitors. 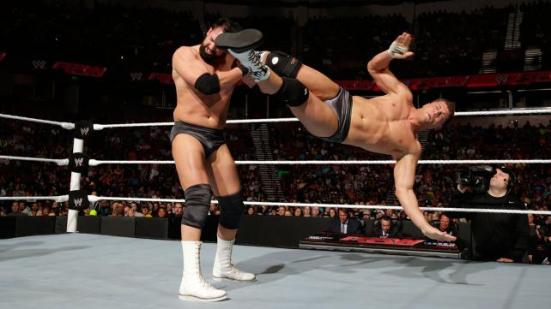 Both The Shield and Evolution remained ringside for this match.  This match was a classic big man vs. big man match.  And once again, the Shield showed why they are money.  After a bit of a back and forth, Reigns went for his trademark dropkick from the outside but was stopped by the rest of Evolution.  Both Ambrose and Rollins came through the ring with suicide dives taking them out and Reigns hit his kick.  Pretty much right after that, it turned into a wild melee that saw the ref throw out the match.  As The Shield were about to destroy Evolution, Steph appeared on the ramp and brought out a horde of heels from the back.  They beat down the Shield for awhile and held Reigns for a beating from Triple H.  Reigns broke free and hit a vicious spear to the CEO.  As the rest of the horde attacked, Ambrose and Rollins came in with chairs and laid everyone out.  Raw went off the air after The Shield delivered the triple powerbomb to Ryback.  I seriously cannot get enough of these guys! 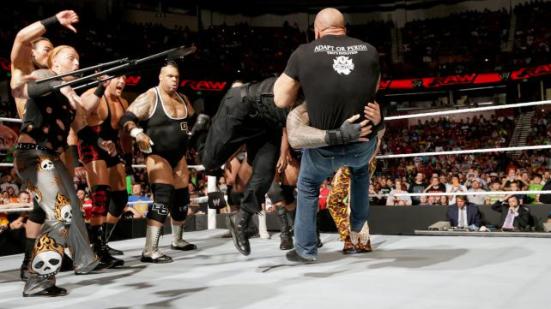