Picking up not long after THE AMAZING SPIDER-MAN, Peter Parker (Andrew Garfield) is still Spider-Man, fighting crime in between studying at school. He is graduating High School with his girlfriend Gwen Stacy (Emma Stone), and finding it difficult to juggle everything. Peter is haunted by the promise he made to Gwen’s father about not seeing her, all the while new evils are lurking just around the corner.

THE AMAZING SPIDER-MAN hit two years ago and it certainly had audiences mixed, personally I was a big fan and I really enjoyed the film. With that in mind, I kept my own expectations in check and I ended up also really enjoying this film. I do like this new take on Spider-Man, it is vastly different than Sam Raimi’s trilogy and this Spider-man is a different being altogether. This Spider-Man to me at least feels more like his comic book counter part, and the two films themselves felt very comic book like as well. This is something that I think really works with the character and the set universe, it does include some campy moments but they don’t feel overly cheesy because of the tone.

Peter Parker is and has basically always been a haunted character, having so much to deal with starting at a young age, and those struggles are really seen here. He is struggling to be Spider-Man, to be a boyfriend, be a good nephew, and so forth. He knows something has to give and he feels the best thing is to try stay away from Gwen, but in his heart he really can’t. This love story is the core of the film, and it works so well because there is a fiery chemistry between the two actors. It is something worth investing in, and it really hurts to see these two at odds. 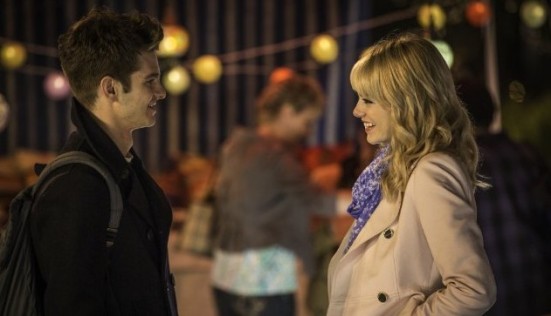 On the other side of the fence, we have more Oscorp in the mix. With a worker Max (Jamie Foxx) being screwed by the system and obsessed with Spider-Man suffer a bad accident that turns him electrical. Also with Oscorp, its founder Norman Osborn (Chris Cooper) suffering from an illness has passed away and his son Harry Osborn (Dane DeHaan) has returned to take his place. With Norman being the best friend to Richard Parker (Campbell Scott), Harry and Peter were also friends. This relationship gets complicated fast with Harry suffering the same illness as his father and he believes the cure lies with Spider-Man. Speaking of Richard Parker, his mystery is also something that haunts Peter and when he has time, he’s seeking the truth of what happened.

THE AMAZING SPIDER-MAN 2 answers a lot of questions from the first film and it gives us more questions and anticipation for the next film. It perhaps will end up being a bridge between the films, but that honestly isn’t an issue for me. The film has a lot going on and for what it is worth it all seemed to be paced out nicely and enough time was given to each part. Roles are bound to be expanded upon in the next film, and there are a lot of clues as to where the future films are going (think IRON MAN 2 with S.H.I.E.L.D.) however for the most part it is in the background. There are quite a lot of characters, and some aren’t given as much time as needed (mostly Aunt May played by Sally Field), but at least there was enough.

With Electro as the main villain, he was quite an interesting character even if his motivation was obsession, I thought it worked for this film and it offered another danger to Spider-Man that one might not have thought of. The story of Harry Osborn was a little rushed, but it is clear he is an unbalanced guy to begin with and he has a lot of demons. He will certainly be a character that will have a bigger role in future films, and his introduction was just fine. There was also the inclusion of Aleksei Sytsevich (Paul Giamatti), it wasn’t a big role but it will play a part later. Whether this all is too much will come down to certain tastes but personally I found it worked for the most part.

The cast are all quite good, by now Andrew Garfield is right at home in his role as Peter Parker and Spider-Man and I do love what he brings to the table. There is a lot of comedy brought forth and it feels natural as well, Spider-Man has fun while he fights crime but sometimes it becomes a bit too sinister, and he played it all nicely. As I mentioned the chemistry between Garfield and Emma Stone is fiery, and in turn she is quite good as Gwen Stacy, against she is at home playing her. They both brought forth a strength to the film, and it works well. Jamie Foxx was rather entertaining as Max and very much all over the place as Electro, but I felt that worked for the character. As Electro he has become crazy and unstable, he does sprout out some campy dialogue and for me it worked just fine. Dane DeHaan to me felt like perfect casting as Harry Osborn and I did love him in the role, he’s unbalanced and wont stop to get what he wants. This is another very different role for DeHaan and he made it his own. The other stand out for me was Campbell Scott who was given a bit more of a flashback role and I thought he owned it, I like his casting as Richard Parker and there is a connection shared between him and Andrew Garfield even if they don’t share the screen time. The rest of the cast were solid, there wasn’t anyone I didn’t really like.

I am a fan of the Marc Webb SPIDER-MAN films and I do like the universe created, this is a worthy follow up and I do look forward to more instalments. If there is something to fault, the script itself could have been better, but they usually always can be. With all the set up for the next film I am excited to see where the series goes.

On the 3D: I was actually rather impressed with the 3D here, it was very clear and during the action it wasn’t really blurry, which is something I really appreciated. Not the best 3D I have seen but it certainly was a lot better than most.