Marcey: We are back as promised with our review/conversion of Chan-wook Park’s English language debut Stoker!

Bea: And boy oh boy does this movie make you feel dirty but for some reason, you just can’t get up and take a shower… unless it’s a cold one.

Marcey: And you can’t just go do that, you need to sit and watch the entire film, without interruption.

Bea: And if anybody does interrupt you, cave their heads in with a shovel. So, what is this about? Well, as Marcey said, it is Park Chan-wook ‘s debut English film. It centers around a young teenager India and her unhinged mother Evelyn. They have recently lost their father and husband respectively in a freak accident. A mysterious man known as Uncle Charlie who was the brother of the husband offers to take care of Evelyn and India in the aftermath of the occasion. Evelyn is relieved, India is less than impressed. And then… things happen. Strange things… wrong things… sickening yet at the same time sexual things.

Marcey: A film that delves into the sexual relation to violence and the like. Done in a manner that hasn’t really been done before, the beauty of Chan-wook Park and if you can believe it based on the script by Wentworth Miller (known for starring in Prison Break).

Marcey: Right?! The man has talent as a writer!

Bea: In a way, I feel “Stoker” could almost be seen as an unofficial companion piece to one of the director’s earlier films “Thirst”. Although “Thirst” was upfrontly about vampires, it also displayed the graphic depictions of sex and violence yet framed in a beautiful way. Such is Park’s work because visually it’s very much his- almost poetic framing and immaculate presentation.

Somewhat reminds me of Kubrick.

Marcey: He definitely works beneath the surface like Kubrick did. And with Thirst he used the vampire mythology to tell such an interesting story, with some very strong themes. A double bill of Thirst and Stoker would make for an interesting day.

Bea: And for his Western debut, he certainly knows how to handle Western actors.

Marcey: He got a superb main trio for this film, two Aussies and a Brit!

Bea: I think it’s prudent we talk about the pretty elephant in the room- Matthew Goode. Good Baby Moses was he disturbing yet at the same time sensual in this.

I loved how ICKY he was with his interactions with India, like a scientist observing a particularly fascinating specimen and yet you could see some sort of twisted desire in his face.

Marcey: A desire that we can’t quite work out, and it’s fascinating to watch because he’s such a mysterious character and Goode played it perfectly.

Bea: I also like how he didn’t need to say much in order to portray such an enigmatic figure. Of course, Kidman was also fantastic. Her role reminded me a little of Alice from Eyes Wide Shut and Grace from The Others. Both completely separate roles to Evelyn of course, but that lady just wasn’t right in the head.

NOBODY was right in the head! :p

Marcey: No they weren’t, they each had their own issues that we see addressed throughout the film. Unwrapped in a very interesting way, and one that we the audience don’t see coming right away.

Back to Kidman though, this was a great role for her and her performance was excellent, some of her best work. I didn’t like The Paperboy but she was great in that, these two films she has really shone through.

Bea: Makes me even gladder that she was able to spread her wings after her divorce from the Midget With A Million Dollar Smile. And Mia, our fellow kin, had such a sterling presence about her. Her sexual awakening was troubling yet unique at the same time. I can’t say I completely UNDERSTAND her, but we see just how much of an impact Charlie has had on her. The ending is super dubious as well.

Marcey: Nicole has always tackled very interesting and difficult roles, got to hand it to her for going there and having that bravery. Mia has also been doing that, her choice of roles has been interesting and her performances impressive each time. India is a complex character, even she does not understand things fully at the start. This is her journey of discovery to what she truly is, and perhaps she had that feeling but there is that hesitance within her to accept it.

Bea: I think it’s that way the audience can relate to India- when we are that age, I don’t think any of us know about the world. We are so curious about it and we want to push boundaries. We want to explore, we want to see what our bodies can do. 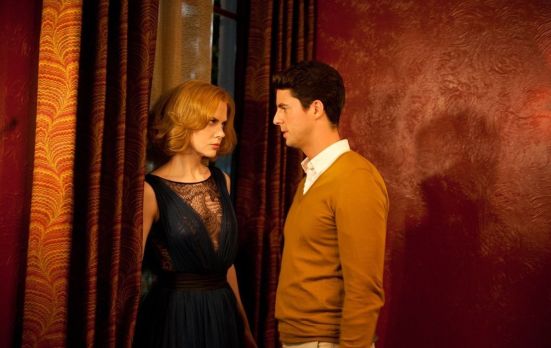 Marcey: And for most of us, not quite the awakening that she has

Marcey: Indeed! Let us mention just how amazing this film looks, it’s gorgeous, just like Chan-wook Park, no matter how dark or disturbing, the film has a beauty.

Bea: Honestly… it’s like looking at a picture painted by Waterhouse if he pumped his veins full of opium.

Marcey: It is like a beautiful and dark poem coming to life, it’s just stunning. Each moment has something to look at and experience, even if nothing is really happening.

Bea: And then the bloodshed starts.

Marcey: Yet it is some how poetic and visually stunning.

Bea: Blood was just another part of the canvas.

Marcey: Chan-wook Park knows how to make full use of his canvas!

Which makes him one of the most fascinating filmmakers working today.

Bea: Haha, he also knows how to turn something foul into something beautiful. It really does take a particular talent to do that. I mean, violence happens all around us in reality, but when it happens on the screen, when it’s poetic, it somehow takes the form of something gorgeous. Yep, this movie is pretty demented, but it’s demented in the best way possible.

Marcey: I have a feeling he’d perhaps be a fan of Stoker, if not then he must have truly lost his mind!

Bea: Haha, honey, I think he lost his mind when he tried to associate a praying mantis with Dracula. Sweeo jiminy, that’s another matter entirely. So what do you give Stoker, my Sick Sista?