After one of the most butt-clenchingly awkward engagement parties ever, you’d think tensions between Grayson, Mina, Harker, Lucy and Jayne would be running at an all round maximum.  In light of what he had seen his wife do at the party, Harker has decided to take Mina out for a night of fine dining at The Savoy (big-wig dinner club) in order to find some reconciliation with Lucy tagging (or perhaps dragging?) along. It’s quite pleasant and generally not very threatening (though with a slight air of frost between them) until Grayson shows up with Jayne on a dinner date. Predictably, the affair starts out incredibly touchy as Grayson admits his culpability to the entire incident before he charms the almost newly-weds with a delightful card trick that he associates with their relationship before all appears well again. Jayne watches this exchange with veiled jealously before she sets eyes on Lucy who is sitting back in her seat, obviously feeling much the same. Lucy excuses herself before Jayne accosts her with a plan forming in her mind. Meanwhile, Van Helsing’s sunlight serum for Grayson is coming closer to completion, however, Grayson is all but forced into a meeting that could be the end of him- hint- it’s in a solarium in the middle of the day with all of the Order figureheads being in attendance.

On the flip-side, Mina and Harker do the S-E-X- BEFORE getting married. Soaking wet, their emotions and passions running at a premium high, wrapped up in each other’s bodies… sorry, I got carried away. Both of them take such a daring plunge before they tie the knot, the action liberates the pair of them in such a way that their relationship seems a little more close rather than formal.

I felt this entire episode was all ABOUT passion considering how much this notion factored into every scene. Harker and Mina consumating their intimate natures, Lucy and Jayne forming the most subtle of sapphic alliances (I’m pretty straight but I found their little morning tea a little blush-inducing), and Grayson’s personal mission to face off against the Order by braving the sunlight using Van Helsing’s serum. Amongst the passion there is a distinct sensation of insidiousness.

For example, during Jayne’s intimate conversation with Lucy, Jayne all but encourages Lucy to speak out to Mina regarding her veiled affection. The older woman discloses to the younger that a woman should never be afraid to exercise her desires, to express what she likes in the company of another woman because they are all the same ultimately. A woman’s mind and touch is so much softer than a man’s and far less presumptuous. Lucy listens to Jayne’s words and feels Jayne’s tender yet simultaneously chaste touch, a bright light gleaming within her eyes. “Tell your friend how you feel.” Jayne purrs confidentially. Lucy leaves the meeting as Jayne watches her go, a look of cunning in her eyes. What is the Huntress planning? If you ask me, it goes two ways.
1) To get Grayson back after having been a witness to the unmistakable attraction between her lover and Miss Mina. Jayne is a ruthless amour and is relentless in proving she is in charge of her body and what she does. She has far too much personal pride and selfish self-confidence in herself to admit that she is a love-lorn fool. Given the fact she is a woman in the company of men, she wants to continue to sheild herself with such a ruthless front by making Grayson her personal stud. Intentionally causing a rift between the two girlfriends will result in Mina getting closer to Harker, leaving Jayne to swoop in and claim Grayson.

2) Despite the fact she is so enamoured with Grayson, I refuse to believe that she of all people does not suspect him to be a vampire, she is merely choosing a different way of dealing with him. In order to destory him, she is striking the third party first. Creating a blue between the friendship of Lucy and Mina will make him vulnerable to her attack. Jayne just cannot be a lovestruck fool considering she would KNOW what a vampire is considering her dealings with them through her years.

Oh Lucy. Down the garden path you wander…

I felt this secondary notion comes to a head in a truly wrenching scene later on between Mina and Lucy during one of their girly sleepovers. I won’t go into details, but imagine the sword of Damocles hanging from the roof when Lucy attempts to act on Jayne’s advice only to come plummeting down to devastating effect.

Speaking of deception, there is a really tense sequence between Mina and Van Helsing when Mina gets rather curious as she rifles through Van Helsing’s special secret cupboard. There she uncovers a fascinating anomaly that has the ability to reanimate dead cells. Naturally, being the medical student she is, she investigates this only for Van Helsing to catch her red-handed. He reprimands her, and dismisses her from his service before she fires back at him that she wants to know how on Earth he came across something so revolutionary and why is it not being used. He bids her to take a seat while he goes into the next room to retrieve a mighty nasty-looking mallet, asking her questions as he creeps closer in behind her, ready to deliver a fatal blow. I was quite interested to see how this would play out to say the least. It is genuinely suspenseful, so credit to the writer, director and the actors who made me give a damn about Mina’s well-being. Though if you ask me, I really have no clue about how Van Helsing would have been able to justify the untimely death/disappearance of Mina considering how well-known she was, oh and the fact she is a soon to be married woman and Grayson would be TOTALLY pissed if he went through with it.

Speaking of Harker, the chap finds himself in a spot of trouble when some incredibly sensitive information Grayson has charged him to obtain becomes public domain. Harker is at a loss about how this is possible as he feels he has been incredibly discreet about his resources. Considering to he is soon to be married and his station in society has not been fully established, theoretically, he could very well disappear. What he doesn’t realise is, to quote Willy S: “All the world is a stage and the men and women merely players.”. What does that mean precisely? You shall see… and most likely clap and cheer when you do. I know I did.

Naturally, the most integral part of the episode is when Grayson finally faces the gargantuan challenge of meeting the sunlight to throw the Order off his scent while he still has theirs. Firstly, I gotta applaud the art design of the solarium- it is so large and intimidating yet all the while being pristine and almost Olympian. Considering the respectably modest budget for the series, this set is quite spectacular without being as sumptuous as other set pieces. Grayson braves the excruciating procedure of being injected with the elixir (needles, needles, owwww) all to briefly sit in a meeting with the Order, at the OTHER END OF THE ROOM at the FAR SIDE OF THE LONG-ASS TABLE in the middle of this hall with absolutely no shade other than from his volumnious fur coat. All the sunblock in the world is not gonna make this easy but Grayson is deadly determined take this bull by the horns and wrestle it into submission. Jayne and her superior Browning watch from the eaves as Grayson confidently strides into the space and takes a seat and launches into an effortless debriefing regarding business, politics and assuring those assembled in the room that he’s got everything under control. He forces himself to withstand the might of day even as he is being escorted out of the space by Renfield. He barely bats an eyelid as he is accosted by a member of the Order who wishes to ask him a question even as one side of his face is beginning to blister. He conceals this using the most simplest of methods and shows absolutely no pain or fear on his face. Props to the make up artist by the way- those fourth degree burns on Grayson’s mug looked as if they hurt like the Devil shooting you up with Hellfire. 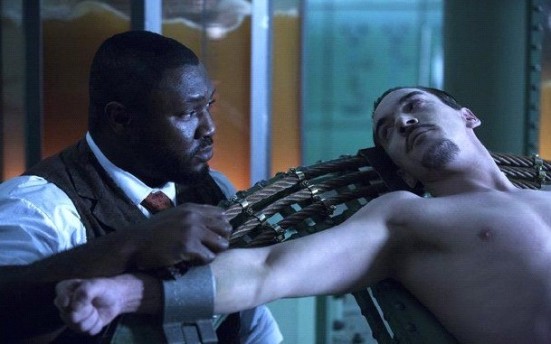 As a whole package, “Of Monsters And Men” is a more than worthy mid-season affair and I for one curse NBC for making us wait until the first week of January next year to see how this all pans out. Considering we now have four more episodes to go until the finale, my mind is already buzzing with who will make it out with their necks intact and their heads still in place. Grayson has secured his future temporarily, Mina and Harker are closer than ever, Lucy’s heart and soul has been all but destroyed, Jayne is venturing on a rampage in her own fashionable style and the Order is at a loss about what to do next now that their plan to expose Grayson has yeilded nothing. Four episodes… four frickin’ episodes! You had better make this worth the wait, NBC otherwise I’ll… I’ll do something VERY nasty involving a DVD case and a salt shaker.