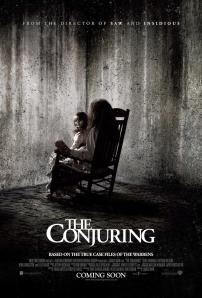 Unlike the majority of the Internet, I never saw the trailer for “The Conjuring”- I knew of it, I knew it’s basic gist, but I didn’t actually watch it on YouTube or saw it in the theatre prior to it’s release. I was exposed to several movie posters, all of which had a suitably creepy vibe about them, but I never really thought much else of them. It wasn’t until I read several reviews saying that this movie was scary enough to earn itself the hallowed R-rating (although here in Australia it is rated MA which is basically the same thing).

Just how scary does a movie have to be in order to earn that? It was said to have little to no gore, absolutely no nudity, sexual content or heavy profanity so to rate a film just based on atmosphere is something that got my attention. Given I am a huge fan of ghost/possession/haunted house films, I figured I would give it a try because we don’t get enough of those types of films. Bearing this in mind, I saw it… and I’m glad I did. I’m also glad in retrospect that I saw little of the promotional materials which is probably what made me enjoy it that much more.

There is nothing new about this movie, but it was the execution that made it work. Family moves into a house, strange things happen which quickly escalate into something more malignant and the problem must be dealt with. James Wan has a passion for telling scary stories and it is through his vision, craft and talent that he is able to draw in his willing audience. He doesn’t rely solely on shock value, instead he ensures his movies have a sense of substance, and in the case of “The Conjuring”, it’s all about the atmosphere, with the unknown being the source of the scares rather than shoving shocking fare onto our senses and proclaiming it to be ‘horror’. Wan is smarter than that, he applies a certain psychology to all of his films to balance out the elements he does show and works well.

It’s obvious he has taken cues from seminal works such as “The Exorcist”, “The Haunting” (the original, not the wretched ’99 remake which ALSO happened to star actress Lili Taylor) and “The Amityville Horror”, but Wan is also basing his tale on the true story of Ed and Lorraine Warren’s case files. Now, I won’t say I don’t believe in the super or meta-natural, but I wouldn’t confess that I am a firm believer in forces beyond our comprehension. Wan wisely translates the Warrens as debunkers first and foremost, in an essence, they are like medical practitioners. In one sequence, we see them confirm to a concerned house owner than the bumps in the night she heard were nothing more than house pipes in her old house. They are not ones to dismiss simple fact in the interest of inferring the supernatural has a hand in absolutely every strange phenomenon which is what helps the audience develop a care for the way the Warrens are presented here.

Vera Farmiga and Patrick Wilson have such a believable and grounded rapport with each other and other characters that they never come across as big, blustery, egotistical penny-pinchers but compassionate and realistic individuals. Of all things that work in this film, the acting from the dramatis personae is the best because at the end of the day, you can have as many ghastly goings on but what makes people care are the people these things are happening to. Wilson, Farmiga as well as Lili Taylor and Ron Livingston (playing Carol and Roger Perron respectively), and most surprisingly, the much younger female actresses who play the Perron daughters are absolutely amazing and completely natural in their performances. I say that without any exaggeration. 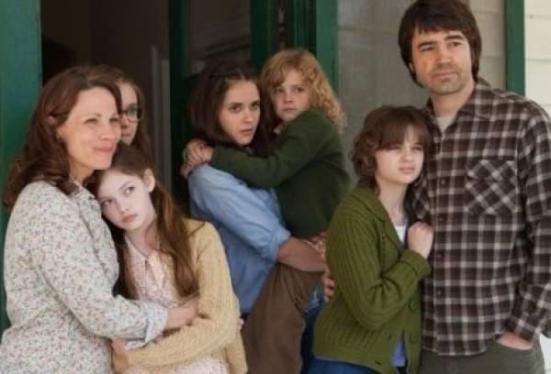 I won’t bore you all by stating the obvious about what makes the movie work because countless other reviews before mine have stated them and in better words. All I will say to sum all of that up is that Wan understands that human fear truly comes from the power of the mind rather than merely from the outside. You show a person a shocking picture they will react to it, contemplate it and then move on, but if you plant a frightening idea in their minds and provide nothing else, their imaginations will run wild and that idea will sear itself into their minds and stay there until the day they die.

Wisely, Wan chose not to rely on blood, guts, silly jump scares and cheap parlour tricks that solely exist to give the audience a fright, whatever red is shed is used to facilitate the progress of the story and the trauma of the situation. Sure there are moments when you will think “Yeah, I’ve seen that before” but they are done in such a way that don’t insult the audience’s intelligence and don’t go so overboard that they become completely ridiculous. From a completely critical perspective though, I felt that the very core of the movie should have been the main focus, because there is a sub-plot that involves Ed and Lorraine’s young daughter that does not truly serve the main bulk of the plot and in some cases, takes me out of the intensity of the main story. It felt somewhat unnecessary and tacked on and I felt it interrupted the flow of the Perron crisis. If this movie had concentrated solely on the Warrens helping the Perrons out in this crisis, I would not have had any issue because there was plenty of suspense, intrigue and frights to go around witnessing the Perrons suffer and endure this event.

Additionally, I felt at the end, despite the delightful chaos of the climax, it still felt like something we had seen before and perhaps better done. When you think of an exorcism, what movie automatically comes to your mind? “The Exorcist”, precisely. I felt “The Conjuring”’s endgame was a little hackneyed in comparison to how the rest of the movie operated. It wasn’t terrible, it just felt too familiar to be completely intense. Some ambiguity, some uncertainty about whether or not the malevolent entity was truly gone would have been nice. I know, this movie is BASED off a true story, but we all know liberties and creative license can be taken when it comes to making a crowd-pleasing, hair-raising, goosebump-triggering fright flick. Additionally, it really is a shame that the notion of Christian religion is once again relied upon to banish the evil, that it is the be-all end-all of demonic vanquishments. One final issue (and really, it is a small one), is that while there are a huge amount of awesome practical effects and make up in this movie, there is a sequence that involves a lot of suicidal birds that is so obviously CGI.

Ultimately, these details do not ruin the rest of the movie, which shows you just how strong the film is thanks to all of the positive elements it has going for it. Is it scary? Well, it depends on your definition of “scary”, but there are many chilling moments. Is it worth the watch? Definitely. I don’t really feel there should be a sequel to “The Conjuring”, because it is a tale well told by all, but should Wan decide he wants to adapt another Warren investigation on the big screen, who am I to refuse?

Author’s note: I wonder if James Wan will ever make a demonic Barbie doll given his perchant for creating creepy, disturbing toys.