Those that know me, know that I love my crime television. Whether it be drama’s or documentary series, I am always there. So when I heard that David Tennant was in a new show and it was a crime drama, I didn’t need to think twice about it and I tuned into the first episode.

The pilot is excellent, perhaps one of the most intriguing pilots I have seen recently. Something did stick out at me, this is going to be a mystery but will we get answers. I did not watch The Killing, but I had heard answers were not given in the Season 1 finale. I didn’t want Broadchurch to go down this route, and finding out that yes we will get answers and it will wrap up I was basically sold.

The premise is a simple one, not unlike say Twin Peaks without the Lynchian elements. Young Danny Latimer is found dead, in the small quiet town of Broadchurch. DI Alec Hardy (David Tennant) has been sent to the town, after a failed trial. He is partnered with DS Ellie Miller (Olivia Colman) and they are on the case, The entire town is basically a suspect, everyone knows everyone, so what secrets does this town have that led to Danny’s death? 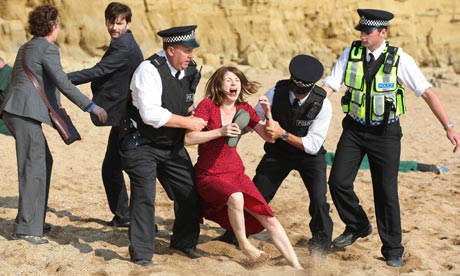 Each episode uncovers suspects and motives for Danny’s death, as well as revealing more about the town and the people. There is more to it then just uncovering a mystery, right off the bat I wanted to know more about the characters. Danny’s family are the ones that do get a lot of focus, there are many secrets hidden there. Our led detectives too have their own issues, one is more clear cut than the other.

The writing for the show was great, each episode revealed just enough to keep things interesting and to keep things going. It never felt dull or boring, even if Danny’s mystery wasn’t moving at full speed, I was interested in learning about the characters and having their arcs developed. Without any investment, this should would have failed immediately. But it had investment, it made me care about the town and the people, and of course who was responsible for Danny’s death.

Broadchurch boasts some fantastic performances, I do believe the entire cast delivered their best and it made for such compelling viewing. The stand out here was Jodie Whittaker as Beth Latimer, mother to Danny. Her role as the grieving mother was moving and very hard hitting. Th character of Beth goes through a lot during the season, and Whittaker handled every obstacle thrown at her. I really did feel the pain of Beth, it’s a performance that wont leave me anytime soon. Of course the former Dr Who David Tennant was excellent, Alec Hardy is a man with a past and while the performance itself kept that close, you could feel the real him deep down. He’s a wonderfully diverse actor and he met the challenges that came with Hardy. Olivia Colman gave us a dedicated detective and mother with Ellie Miller, she certainly had her issues and we knew that. She shared an interesting chemistry with Tennant, and their character interactions were some of the best on the show.

Broadchurch is a very successful show, it gave us a story that we have seen before but a unique take and presentation. It is nicely paced and it made full use of its eight episodes, even the odd filler moments were quite well handled. I want to revisit the show at some point, it has that rewatch value in my eyes. I am happy we get a second season and it will be interesting to see where they go from here.