There were two things about the new action film THE LAST STAND that had me excited for it: 1. It marked Arnold Schwarzenegger’s return to leading role status in the action film genre since 2003’s TERMINATOR 3: RISE OF THE MACHINES and 2. it is U.S. directing debut of acclaimed South Korean director Jee-woon Kim (the director behind the terrific films I SAW THE DEVIL, A BITTERSWEET LIFE and THE GOOD, THE BAD, THE WEIRD). Just having these two names associated with it definitely put this film up there as one of my most anticipated films of 2013 for sure. However did the actual film itself live up to my expectations? Damn straight it did!

The film tells the story of Ray Owens (Arnold Schwarzenegger), a former L.A. detective who, after losing the lives of his team during a police operation gone horribly wrong many years earlier, now works as the Sheriff of the small quiet country town of Sommerton Junction, Arizona. However things changed when one night Owens receives a phone call from an F.B.I. Agent named John Bannister (Forest Whitaker) who informs hims that a few hours earlier an infamous and very dangerous international drug lord named Gabriel Cortez (Eduardo Noriega) had escaped from police custody with the help of his men and is driving a one-of-a-kind custom-made Chevrolet Corvette C6 ZR1 that can race up 200mph straight to the Mexican border, which just happens to be close to Sommerton Junction. At first he doesn’t want anything to with it but when tragedy strikes, Owens decides to do whatever it takes to protect the town from Cortez and his men (which include his right-hand man “Burrell” played by Peter Stormare) with the help of his inexperience deputies (Jaimie Alexander, Luis Guzman, Zach Gilford), the town drunk (Rodrigo Santoro) and a crazy local vintage gun collector (Johnny Knoxville).

While I do admit that the film’s plot is pretty simple and straight forward (I would be lying if it wasn’t) but that doesn’t stop it from still being a hugely entertaining, violent, action-packed, funny and compelling action film. I had an awesome time watching this film and believe that it was due to both star Arnold Schwarzenegger and, especially, director Jee-woon Kim. While already did his film comeback with his cameo/supporting roles in THE EXPENDABLES series, it was great to see Schwarzenegger back to headlining his own action film again after being away for so long.

While his acting can be a little rusty at times in certain moments and he isn’t able to do quite all things that he use to do in action films when he was younger (the man is in his mid 60’s after all) but most part I thought he did quite a good job with his performance as “Sheriff Ray Owens”. He was still able to bring both his trademark charisma and commanding presence to the role and as well as still being able to kick some arse during the film’s many action set-pieces without it ever feeling too silly (he is still a pro when it comes to delivering the film’s one liners). Also he has a pretty strong supporting cast of great character actors to back him up. Every single actor in the cast all do a good job with their performances and bring something unique to their roles that make their character stand out. The stand outs from the cast for me were Johnny Knoxville, Jaimie Alexander, Luis Guzman and Peter Stormare (I have no idea what the hell was up with his weird Southern accent but I did enjoy him chewing up the scenery). Plus it helps that they had a great director like Kim to work with. 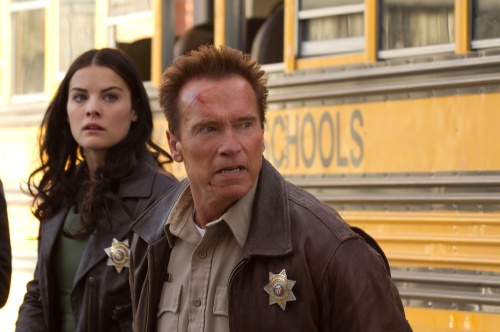 If this film had been made by a different director, I think it might have just been a decent if passable piece of entertainment. However in Kim’s hands, he makes it into a truly fun experience. I must admit though that before I saw the film I was a bit worried that Kim’s distinct visual style would have been muted, bland or toned down since it has seemed to have happened to many Asian or other foreign directors in past whenever they go to Hollywood to make a film. Now having seen the film, I can definitely say without a doubt that this does feel exactly like a Jee-woon Kim film from start to finish. There are so many great moments sprinkled though out it that were done in his trademark style that made me giddy with excitement (I think it helps that he brought some his own South Korean crew members over to the U.S. to make the film). He brings so much energy and skill when it comes to his direction, especially when it comes to the film’s action scenes.

Every single action set piece was superbly well done in how they were both staged and executed, whether they be from car chases (the car chase through the corn field was great) or shoot outs (the entire the last half is quintessential Jee-woon Kim). Plus he doesn’t skimp on the violence, which was can be rather bloody, over-the-top and even surprisingly darkly humourous at times. Also he was able to perfectly balance the film’s tone rather effectively so that it never feels jarring since it does shift back-and-forth from being either serious, comedic or over-the-top (actually the tone for this film really reminds a lot of his 2008 action western THE GOOD, THE BAD, THE WEIRD, which is good because THE LAST STAND is definitely in the same vine as that one). Also while the script by Andrew Kuaner it isn’t a particular great by any means (I do have some issues with it which I’ll get into soon) but it is still quite solid in terms of action film scripts. The cinematography by Ji-young Kim was terrific (night scenes were shot in a similar fashion to I SAW THE DEVIL), the score was well done, it’s very well paced and the last half was awesome.

While I did have a great time watching this film, I will admit that it is quite flawed nonetheless. One of the major ones is *MINOR SPOILERS AHEAD* that there is something that happens to a major character at the halfway point that is supposed to be the catalyst for Sheriff Ray Owens to fight back against Cortez and his men but I felt that it sadly lacked the emotional impact that it would’ve had. I guess we just never really get to spend time with this particular character to really care what happens to him/her *END MINOR SPOILERS*.

Some other problems I had with the film were is that while Forest Whitaker was okay as “Agent John Bannister”, unfortunately he did over-play his role a little too much that he came off a bit bad at times and I was annoyed by how stupid his character was as a F.B.I. Agent (I blame the way how the role was written more than anything). While Eduardo Noriega’s main villain does have some good elements (the way he drove that Chevrolet Corvette C6 ZR1 was pretty damn cool) but other than that I didn’t think he wasn’t really that interesting of a character. He didn’t really give off any sense of threat to me and it didn’t help that Noriega’s performance was a bit on-and-off at times (although he does get better in the last half). Also I felt that the relationship between both Jaimie Alexander and Rodrigo Santoro’s characters was a bit weak (if the film had more time to develop it more, it probably would have been a lot better). Plus some of the dialogue can be a bit bad, the first act was a little slow with its build-up and there are some pretty dumb moments as well (although those didn’t really bother me too much).

Overall while THE LAST STAND may not be a perfect but still quite a great action film that works both as a strong comeback vehicle for Schwarzenegger and Hollywood directing debut for Kim. If you are a huge fan of either of these two men or the action film genre, than you are definitely going to have an absolute blast with this film. It’s pretty damn good stuff if I say so myself.