Attention everyone, this movie is NOT “Twilight”.

Okay I had to get that out of the way first and foremost because I’ve been reading around and people still seem to be convinced that just because the plot revolves around an undead romance that it must be “Twilight” and isn’t worth seeing. Well ladies and gents, as a man who is infuriated by the mere mention of that horrible saga, I’m here to tell you that “Warm Bodies” is nothing like it and is actually a fresh breath of air for today’s modern romance/comedy with a dash of zombie madness. The story itself revolves around a teenager named R (Nicholas Hoult) who is the victim of a zombie apocalypse and now roams around an airport with hundreds of other zombies just doing his daily routine of groans, slow walking, eating brains and a hilarious inner-monologue that immediately makes him very likable. One day when he’s roaming the land for food with his undead buddies, he comes across a very-much alive young woman who he falls in love with and wants to protect for reasons which I will not spoil in this review. Lets just say it’s a very cool and rather cute thing when it happens.

This brings me to one very important point that everybody needs to understand before or while watching this movie that whatever you think you know about zombies or how the human body works, just toss it away or open your mind a bit because obviously we really know nothing about zombies since they don’t exist and this movie has its own twist on the genre. I had a little trouble with this concept back when I saw the first trailer but then decided to go into the movie more open-minded and was very happy with the result. At this point I’d actually like to read the novel as well and see if there were any differences.

With all that in mind, lets look at the actors who inhabit this world and I’ll start off by saying that all parties did a terrific job. Nicholas Hoult’s rising star shows in this film as his performance as R is funny when it needs to be but also creepy and authentic since he is in fact playing a zombie. He does immediately strike you as an actual zombie but with a small hint of humanity left. Like I said earlier, his inner-monologue and analysis of his environment/situations got the biggest laughs but at the same time it’s not overdone like many films have done in the past. As he slowly becomes less dead you could say over time, he still plays the part out very well so a big kudos for his performance. Then we move onto the supporting cast starting with Julie played by the lovely and talented Teresa Palmer whom R becomes protective of after their first encounter. Teresa more than holds her own in this role and like I said before this is not “Twilight” and Teresa’s character does not set women back 20 years like Bella does. Julie is tough when she needs to be, vulnerable at times but still appreciative when someone helps her. The way her and R connect actually feels very real despite the situation and they had a very nice chemistry. 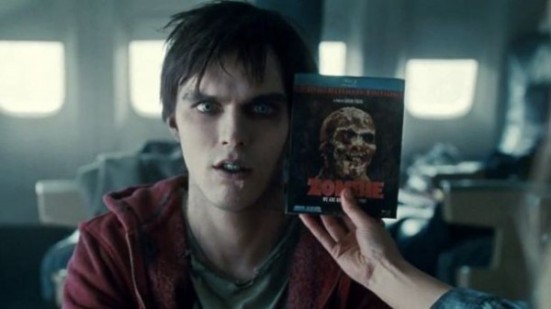 Rounding off the rest of the cast are good supporting roles from Dave Franco and Analeigh Tipton as well as John Malkovich who is the most recognizable actor in the movie and plays the typical post-apocalypse human resistance leader that lost somebody close to him and will never listen. You know the type I mean but he still does a good job with it. However when it comes to supporting cast, the one who absolutely stole the movie for me was actor/comedian Rob Corddry who plays a fellow zombie to Nicholas Hoult’s character named Marcus who also roams the same airport. Not only is his character hilarious at times with some very funny zombie dialogue but the way he supports R on his quest and is inspired by him was downright wonderful. Rob played the part beautifully and once again you felt very attached to him and hoped for his safety and well-being. I’d even go as far to say that I think the relationship between R and Marcus was more interesting and fun than between R and Julie, that’s how good Rob was.

That’s one thing in this movie that director Jonathan Levine absolutely nailed, he made all the heroes extremely likable and very quickly. Levine has been doing some tremendous work over the last few years with his last being the severely underrated “50/50” and “Warm Bodies” is no exception. He gave a beating heart to a zombie film that I didn’t believe could be done again since Edgar Wright’s “Shaun of the Dead” but I was wrong. The movie also boasted a terrific collection of classic 80’s love/pop songs that really sent me back and I’d also say that at just over an hour and a half, the pacing was very good. I’ll admit that some scenes/situations did seem to go by a little quick and could have used more development but overall it was terrific.

Other than the slight pacing issues, I’d have to say my only real negative about the film were the creatures in the movie called “Bonies” which were  basically zombies that were too far gone and just purely death on legs (no conscious left). While I think they were very cool for the story, the CGI use for them was a bit of a distraction. Sometimes it was really good and sometimes it was not so good and I’m wondering if they could have taken some liberties and gone another direction with these guys. However it’s a minor complaint as their viciousness and design were still very cool and they certainly kicked-ass when they needed to.

So I’d say without question that even though I went into the movie not knowing what I was in for, I had an absolutely blast as many others have as well. I actually look forward to seeing it again on Blu-Ray because there were a lot of screaming girls in my sold-out theatre so that was a pain at times. However that didn’t stop me from having a great time and if this film turns out is only the first of a potential franchise, I’ll certainly be there opening night for the sequel.

Final Note: I also want to shout out a congratulations to Marcey’s sister Bruna Papandrea who was one of the lead producers for the film. Terrific job.

One thought on “Review: Warm Bodies by Nick Bosworth”