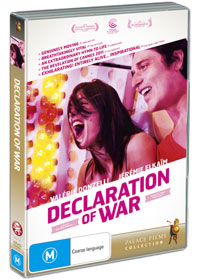 The Film: Quick, tell me the first thing that comes into your head when you hear “Romeo and Juliet”. ‘Love story’? ‘Classic’? I’m not one to judge if you answered with those words, but when I hear about The Bards’ seminal work, I think of ‘Stupid teenagers’. Let’s face it, when you get down to it, Romeo Montague and Juliet Capulet were selfish, impulsive and foolish. In “Declaration of War”, there ARE two characters named Romeo and Juliet who face enormous odds that stand in the way of their relationship, but here is the clincher- they are a loving, married couple with a terminally ill son and they will do anything and stop at nothing to make him well again. In other words, this is a story about love- parental, selfless love.

Based on true events, “Declaration of War” is a vital piece practically a documentary, showing just how unyielding the relationship between parent and child can be. While it deals with such heavy subject matter, the film is more uplifting than you think with some sterling performances from the lead cast, in particular Valérie Donzelli and Jérémie Elkaïm as Juliette and Roméo who essentially play themselves. When Adam, their young son is struck down by a malignant brain tumor, both declare total war upon sickness and won’t stop until the malady that threatens their child is exterminated. This story is as much about survival as it is about spirit and in this case, both go hand in hand.

What really lifts this film above what would be termed a ‘weepie’ is that it is played out realistically without any deus ex machina, placing you right in the center of the couples’ journey, defying every single convention you can possibly think of without coming off as melodramatic. For every bit of bad news the couple recieve, you are right by their side and you are overcome every time they continue to battle on through this conflict.

I am tremendously thankful I got to experience this film. It isn’t often that I get to see a legitimately great love story that doesn’t come off as heavy handed or conventional. Given the calibre of this piece, I really hope it gathers further recognition because it is the sort of movie that won’t only capture your heart but also your soul. If Willy S. were alive today, he would have snapped his fingers and said “Gods be damned. Why didst I not think of such fare?”.

The video and audio are rather decent, I was actually surprised it looked this decent!

Extras:
– Deleted scenes, most likely cut from the film for pacing reasons than anything to suggest they lacked quality.
– Theatrical trailer, to let you know it exists and you should see it.