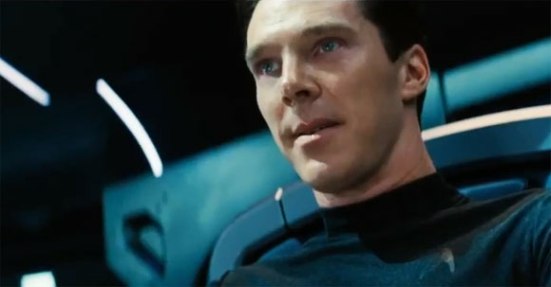 As promised our first look at Star Trek Into Darkness is here, it is a one minute teaser trailer basically. We are expecting a full length one soon, but I am sure this will keep your appetite wet for the time being – it is one heck of a tease!

I was blown away, this looks great! It feels some what darker than the first film, but I could be wrong there. We get a glimpse of what the film is about, and of course a look at our villain played by Benedict Cumberbach. If you see on the screen cap above, he is wearing a Starfleet Uniform. Rumors are running wild as to what character he could be playing, is it a new Khan? Gary Mitchell? Or a brand new character all together? One thing is for sure, this will be an epic film!

When the crew of the Enterprise is called back home, they find an unstoppable force of terror from within their own organization has detonated the fleet and everything it stands for, leaving our world in a state of crisis.

With a personal score to settle, Captain Kirk leads a manhunt to a war-zone world to capture a one man weapon of mass destruction.

As our heroes are propelled into an epic chess game of life and death, love will be challenged, friendships will be torn apart, and sacrifices must be made for the only family Kirk has left: his crew.

See below for the teaser and also check out the Japanese version, which has extra scenes.