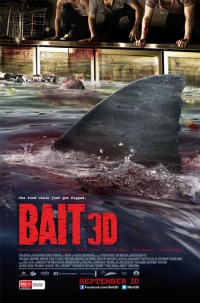 Bait 3D isn’t what I would call a conventionally good film; it is rather terrible at times. However I enjoyed myself with it, it is a fun and silly film that honestly doesn’t take itself too seriously. This is a step above the schlock of SyFy Original films, those can be fun as well, but this had a bigger budget and more could be achieved. I do enjoy the films that are ‘so bad they are good’, it usually helps if they are ones that are unintentionally so. This isn’t unintentional, the intention here was to be extremely silly and fun, and it actually does work on that level. This most certainly is not Jaws, nor is it another Shark Attack 3.

The story here (yes it does have one) is about a tsunami that hits a costal town; it traps a group of people in a supermarket. Not only are they trapped in a flooded building, but also there are large 12-foot sharks around. The battle is on as they try to survive each other and the sharks in the water.

Short and sweet so to speak with the story for this one, it isn’t anything complicated at all. It has a beginning that sets up some characters including Josh (Xavier Samuel) and the threat of the shark, in a scene that is so ridiculous I laughed a lot. The characters are paper thin, there was an attempt to kind of develop them, which isn’t overly typical of these sorts of films. It is obvious who will be shark bait, and no tears are shed, as these characters are lost. I wasn’t invested in anyone really, despite the efforts characters were annoying or bland but some were truly hilarious (thank you Lincoln Lewis). I wasn’t really bothered about these things; usually I can be, but Bait 3D had a strange kind of charm about it that despite the obvious flaws I found myself enjoying it. 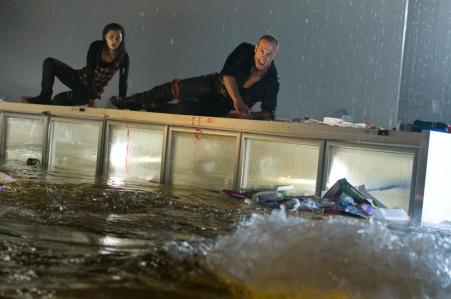 This is a film that has been a long time in the making, changing directors as well. Kimble Rendall isn’t a name I am familiar with, I did get the idea he intended this to be funny and not a serious effort, in the vein of films like Deep Blue Sea. It does work like that mostly; it follows those usual elements that come with the territory (characters making stupid decisions ect). It is a shame Bait 3D didn’t really try anything overly new or took any real chances, it played it a little too safe.

At the end of the day, at least for me Bait 3D was a mixed bag. I didn’t hate it, I actually had fun with it and it was far better then I had heard. I knew not to take it seriously, which is perhaps why I found myself enjoying it. The effects are actually pretty good, a mixture of CGI and practical, with sharks that weren’t insane in their looks or actions for a change (most of the time). This is rather silly, the performances aren’t anything to write home about, and I am not sure what the deal was with everyone’s accents. Bait 3D wont be for everyone, but for me it made a fun mornings entertainment.