“Hoop Dreams is a guest review by Sam Inglis, he is an amazing writer and I think you will enjoy his wonderful review for this epic documentary. You can find more from Sam at his website 24FPS.” 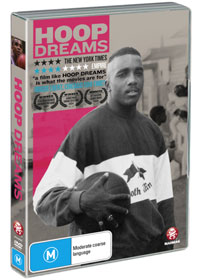 Shot between 1987 and 1992, the film chronicles the high school basketball careers of two young men in Chicago; William Gates and Arthur Agee. Neither was especially well off, and while both had opportunities due to their prowess as athletes these came more regularly and readily to Gates, as his was the more promising talent. As well as observing them on the court, Steve James, Frederick Marx and Peter Gilbert gained access to the personal lives of their subjects; chronicling the ups and downs of family life and other trials and tribulations off the court. It is these off court moments that really give the film its sticking power, because they are what allow it to become much more than a film about sport.

Without apparently trying to, Hoop Dreams becomes a powerful coming of age film, a film about family, about the way American society views young black men, about the educational system, about poverty and about the ghetto. Steve James doesn’t make any of these things pointed, but the themes emerge organically as William and Arthur’s stories ebb and flow. For a while the narrative seems like it is going to play out in a way that could feel simplistic; William as the kid on course to fulfil all his dreams, Arthur as the one watching them go up in smoke through a combination of circumstance (even with a partial scholarship his parents are too poor to keep him in St Joseph’s, the school with the renowned basketball team, which William also attends) and laziness (he’s no great student). Life, however, is more original than that, and you couldn’t make up the events that actually end up occurring during the film.

Some of the most interesting, and most wrenching, stuff in the film concerns the Agee family. Arthur’s parents Bo and Sheila clearly have a complex relationship, and you see Arthur’s distrust of his Father – who, in the course of the film, had and overcame a crack addiction – manifest itself in little ways. Two of the most resonant scenes take place during one on one basketball games between father and son; when Arthur is about fifteen Bo breaks off from a game so he can go across the playground to buy crack, later, as he’s about to go away to college, Arthur’s frustrations with his dad are writ large in a rematch. The film doesn’t comment on these things, but simply lets them play out, and they are all the more effective for it.

Also fascinating is the difference between William and Arthur’s schools and their coaching. William’s coach, Gene Pingatore, may be the person with most to complain about regarding his portrayal here, as he comes across as being obsessed with former star player Isaiah Thomas, and his coaching as if he’s trying simply to mould Gates as another Thomas. However, he also comes across as very professional, good at his job, and well meaning, as someone who cares about the kids, even as they go through what is, for the most talented, something of a meat grinder (this seems especially true for William). We see less of Arthur’s coach at Marshall High, but Luther Bedford comes off well, working with limited resources and a team full of people who might soon prefer gang life to school life (this too is something we see on the periphery, Hoop Dreams simply doesn’t have time to fit in everything it wants to say). Through the prism of sports and talent spotting the film looks at how these young men are sold the dream – William’s recruiting visit to Marquette University is a real eye opener in those terms – and how that dream isn’t always real.

You could easily remake this film as a fictional inspirational sports movie. It has the uplifting moments it needs both on and off court (Sheila Agee’s graduation as a nurse’s assistant stands out even above the many triumphant basketball moments). It has the battles with adversity (money, drugs, injury). It has beautifully drawn characters with great dialogue and winning personalities; William the quiet, thoughtful one and Arthur the brash, funny, charmer. It has a large and equally well drawn supporting cast, from Pingatore and the Agee family to William’s older brother Curtis, whose life is really a study in what happens when dreams falter. Almost any of these people could support a film of their own.

The sports footage is excitingly captured, and well spread through the film, with each year having its own important games and sports narrative. Because of their different career trajectories William and Arthur have different years in which they take the spotlight on court, and we get to see how different their talents and their playing styles are.

Film is never really the whole truth, editing ends any debate about that, but over 176 minutes Hoop Dreams tells a story that is dramatic, funny, sad and feels like an accurate reflection of the lives it chronicles. It tells a brilliantly compelling story about two young men, but it does more than that, and under that central story there are other equally compelling tales and personalities, and important things being said, things that remain relevant 18 years after the film’s initial release.

There is only so much you can do with this footage; shot on grainy 16mm and incorporating some footage from what would seem to be Hi8 or VHS video cameras. The presentation is acceptable for what the film is, and is in its original aspect ratio, but you’ll never use this disc to show off your TV and DVD player.

Unfortunately the commentaries from the Criterion release are not ported over, the only extra content is the film’s trailer.

Overall Rating:
For my money Hoop Dreams is one of the great documentaries. It’s riveting from start to finish and you get caught up in the sport and in these young men’s lives; feeling every loss and every victory with them. My only real complaint is that I wish there were another three hours of it.