What’s a Blog-a-thon? This blog-a-thon is a challenge, its participants have chose films the other has not seen to watch and review.
September Blog-a-thon criteria: Hidden 80’s Gems
Why A.J. Chose This Film For Marcey: “David Mamet is one of my favorite writers, and the dialogue he’s associated with is, more often than not, gloriously profane. But “Things Change” (only his second film as director, after debuting with the awesome “House of Games”) is a rather sweet and gentle film. It still includes trademark Mamet elements like the world of crime and features a few of his favorite actors (Joe Mantegna, Ricky Jay, etc.), yet in many ways it’s unlike anything he did to that point or since then. “Things Change” is a nice, underrated flick from a guy who writes the way I wish people spoke, and I’m hoping Marcey ends up sharing my sentiments.”

Marcey’s Review: I have seen a number of David Mamet’s work, and I have been a fan of those I have seen. He’s a solid talent, great talent as a writer and a director. Things Change is a film I had not really heard about, Mamet’s second outing as director. The premise sounded rather interesting, and I was quite excited to take this journey as part of the September blog-a-ton. The good news is I really did enjoy the film, which I am sure will please A.J. greatly. This is a film that hooked me in right away, and I remained intrigued throughout, even when I did sense I knew what was going to happen, it managed to surprise me.

The story here is about Gino (Don Ameche), an old time Chicago shoeshiner; one day some men escort him away to a local crime man (Mike Nussbaum). The organization wants Gino to take the murder wrap for a crime boss with whom he resembles. If he agrees to this, Gino is promised his dreams, which he states is a boat to have in Sicily. At first he seems against the idea, if he says yes he must serve three years in prison first before getting his boat. After a bit (in a scene that works tremendously well) Gino agrees to the deal, he is then handed off to a young gun in the organization Jerry (Joe Mantegna) who ends up taking them both to Lake Tahoe for the weekend, as a bit of a last hurrah before Gino needs to turn himself in. Their time away proves interesting, and a series of coincidences and misunderstandings follow.

This is a funny film, with heart and a huge amount of entertainment. Gino is a wonderful character, a man who goes along with these events, very innocently. The situation he agrees to is not a nice one, and while watching I was hoping for something to save him from such a fate. It feels like the world in which this was set feels this way also, and his weekend with Jerry isn’t what these two could have imagined, through a series of events. The way that Gino presents himself and handles himself is almost key in how this will play out, and watching these interactions he has with people is pretty extraordinary. The scenes that really shine are those Gino shares with a Don (Robert Prosky), whose estate the pair were invited to during their adventures. As the Don tries to figure Gino out, Gino in return simply acts as himself and the suspicions are then gone. The scene where the two men are outside in the sun resting against a wall is pure magic; this is the stuff that Mamet is so great at. 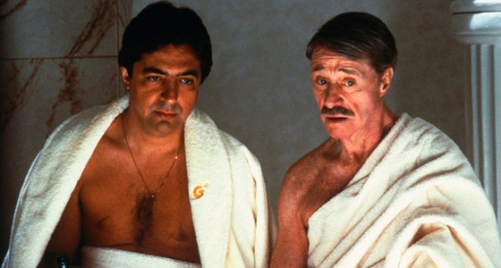 Part of what makes this such a great watch is the performances; Don Ameche really steals the show. He delivered such great work right up until he passed away back in 1993. He was in a lot of films I watched in the 80’s and early 90’s, and from my young age I was a fan. His turn in this film is certainly going to rank right up there as my favourite from him. It is a very honest performance, he plays this perfectly, every movement and facial expression just sells the scene. Everything he does has a reason, the man understood his art and craft, and this performance showcases that. Robert Prosky is another actor I have always admired, and he was fantastic here. The work these two did together here was nothing short of brilliance. Joe Mantegna is also really good; he is doing what he does best here, nothing to complain about.

Things Change is a really successful blend of comedy, crime and drama. Not always easy to pull off, but Mamet did so here. The crime aspect never feels silly; it certainly takes a more realistic approach. The friendships that form are very understandable and quite natural. As the web untangles towards the end it is both something expected yet unpredictable, it is just really nicely played. This is definitely a film worth watching, and again thanks to A.J. for picking this one out for me.

Head over to A.J’s website CINESLICE and read his Week 3 review of Gymkata