If you’re reading this then you are a movie fan. We love are movies and some we love than others. But we’ve all met someone who has taken their love too far…

I’ve got no big issue with Trekkies. I haven’t seen enough Star Trek to judge it myself and the fans usually just keep to themselves. They don’t spend their time trying to convince everyone else that their favourite movie is awesome, like the Twihards.

But they have to answer for starting the culture of fandom. Their fanaticism was so extreme that they set the benchmark for all future groups of obsessed fans. In order to prove that you’re the biggest fan (for some reason people feel that this is important, almost like they have no personality of their own) they have to dress up and act like an idiot. Trekkies are to blame for this. So you’re a teen who feels like they don’t fit in the world. You’re unique and have a different viewpoint on society than the rest of the jocks and cheerleaders you go to school with. Obviously you need to express your individuality by wearing the exact same clothing as a few million other people who are just as unique as you. Nothing says that you’re your own person like slapping Jack Skellington on everything you own.

Burton has been behind plenty of great films in the past, yet his distinctive style seems to have become an instant ‘outcast’ pack for every suburban teen with angst issues. He’s certainly not as do-no-wrong director that many people have taken to view him as – especially since he’s spent the past decade making the same film, complete with same cast and musical score, again and again. 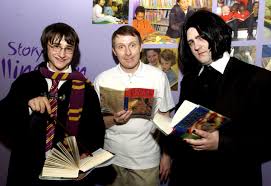 What kid doesn’t love Harry Potter? Great stories that tap into this generations psyche like few other books and films before it. I’m not going to rag on a bunch of kids here. Adult Harry Potter fanatics, on the other hand…

There’s something just a little bit creepy about adult Harry Potter fans. It always seems as though part of their childhood was missing and they’re trying to make up for it by banging on about a little boy who wears robes. What gets worse is the amount of time dedicated to talking about character relationships and writing pornographic fan fiction (more on that later). If I was in a position of law-enforcement, I’d be taking the time to look into these peoples hard-drives.

Firefly was an awesome show. I’d go as far as to say that it is one of my favourite shows. I’m disappointed that it got canned after only eleven episodes, but I’m glad that fan driven campaigns to bring it back gave us a feature film that wrapped the story up. It was satisfying enough.

But you know what? That was six years ago. The cast and crew have all moved on, and so have most of the fans. The number of people seemingly spending all their spare time campaigning to bring it back is, quite frankly, a little worrying. If they’d spent that time doing something useful such as working to stop the HIV plague in Africa the world would be a better place. Browncoats, kindly retrieve your priorities from your arses and make a contribution to the world.

This term may not be familiar to you, but you know the behaviour. Ever been on a fan forum and wondered why so many people are fiercely debating which Harry Potter characters should hook up? They’re the ‘Shippers’, or ‘Relationshippers’ (get it? Retarded, right?).

It’s not enough to simply discuss their ideas for where the series might eventually end up, but they focus more on the character relationships. And as with everything on the internet, people have to take it too far to be heard. Lines were drawn, gauntlets thrown down and people started getting nasty. Even after the series got wrapped up, they STILL defend their position. Have you nothing better to do than try and convince the world why Hermione should bionk Malfoy?

Just to make it really creepy – most of the shippers have pubic hair. There must be a law against this… 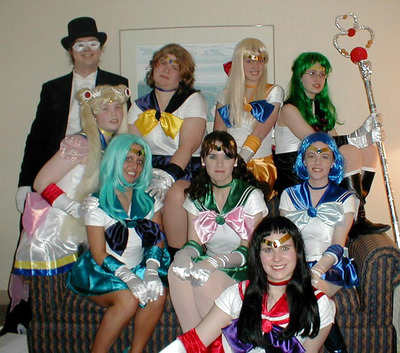 Guess what, white people? It’s OK to like things that originate in cultures different from your own. In this day and age it’s actually normal behaviour. I totally ate Italian food last night. I am not, however, dressing in clothes with Italian writing on it, gelling and dying my hair to look like an Italian cartoon character, nor am I generally aping a culture I have little connection with in the manner that a parrot mimics speech without know the meaning of the words.

Yes, you want people to think of you as ‘quirky’ or ‘weird’ or a ‘paedophile’, but you could try and do something unique instead of plastering yourself with another culture’s stereotype like one would plaster their school binder with stickers. This behaviour is at worst offensive to the people of Japan and at best makes you look like a fat, badly dressed pasty white person with no self awareness. Either way, you should stop doing it.

Twilight fans share a similar trait with Star Wars fans, in that they’ll blindly defend any crap that gets slapped with the Twilight label regardless of quality. The books, let’s face it, aren’t the travesty of fiction that people claim they are. The movies, however, are pure craptastic, woeful disasters.

There’s no reason they couldn’t have worked, the studios were in such a hurry to capitalise on the fad that they pushed ahead with the productions at the detriment of quality. In order to prove themselves ‘true’ fans, Twihards will flat out refuse to acknowledge any fault, going out of their way to make excuses on its behalf.

Just as annoying are the Twilight haters. The first complaint they ALWAYS bring up is the fact that sunlight doesn’t kill Edward because “like, if they’d read a PROPER vampire novel like Bram Stoker’s ‘Dracula’ they’d totally know that the sun makes vampires burst into flames”. News flash, dumbasses: if you’d actually read ‘Dracula’ you’d know that the sun doesn’t kill him either – merely weakens his powers. So read a book, bitch.

Me, I love comics. And I love a good comic book movie. And if the film-makers feel that the movie would be improved by making some alterations to the story and characters, that’s also fine.

But there are some people out there for whom this isn’t fine. In fact, this is nothing short of sacrilege. (It’s also a way for them to spout off about their impressive knowledge on comic books – and they have to live with that, so let’s not give them a hard time.) Sometimes these people just need to chill their grills and accept that these changes need to be made.

Complaining that Galacticus was a space cloud in Fantastic Four 2 instead of a giant man in a purple helmet makes you look like a twat. Picking out details from Wolverine concerning his frequently rewritten back story also makes you look like a nonce. Why? Because these movies are bloody awful in their own right.

Yeah, yeah, I know…Rule #34, no exceptions…that doesn’t mean that I can’t rag on them for being anti-social weirdos. Those unfamiliar with the term: Slash Fiction is an off-shoot from fan fiction, except with the focus on sexual exploits, usually homosexual in variety. And for some demented reason, this trend has really taken hold in the Harry Potter fan base, with Twilight, Star Trek, superheroes and everything else getting a mention.

There can be something downright funny about some of the scenarios dreamt up by these writers (Edward and Jacob was a given), but the massive amount of time, effort and dedication people have thrown into these demented, badly spelt paragraph free fantasies is mind-boggling.

Star Wars fans are a problem because no matter how many times George Lucas kicks them in the bollocks, they stand back up and ask for another, swifter kick.

There’s no arguing with the fact that Star Wars is a classic, and the sequels only cemented its reputation as a classic. Even the hefty amount of merchandise was funky. In the last 15 odd years, however, the Star Wars brand seems determined to drag itself through the mud with pointless re-issues of the original films and awful, awful sequels. Just to rub course salt into the wound, the sheer number of crappy, broken video games and tacky plastic toys should be enough to dissuade the fans from buying them, yet sales still remain strong, giving Lucas no incentive to run any form of quality control or creative process. As a result, diehard fans are preventing the rest of us from getting cool Star Wars stuff.

If Star Wars fans actually insisted on good merchandise instead of blindly buying it by dint of it simply being Star Wars related, Lucas would have to meet their demands. He is, after all, a business man. Likewise, if people stopped watching every shovelful of crap that gets released into cinemas, they might consider trying to redeem the series with a good film.

But that won’t happen, because of some genetic defect these fans feel the need to defend this garbage (and for the record, if you want to defend the Star Wars prequels I can and will have you legally declared mentally retarded) , meaning that more and more garbage will be piled on the heap.

The upcoming Star Wars projects – a ‘Star Wars’ sitcom and a television adaptation of the ‘Lego Star Wars’ video games – suggest that Lucas is now just seeing what he can get away with.