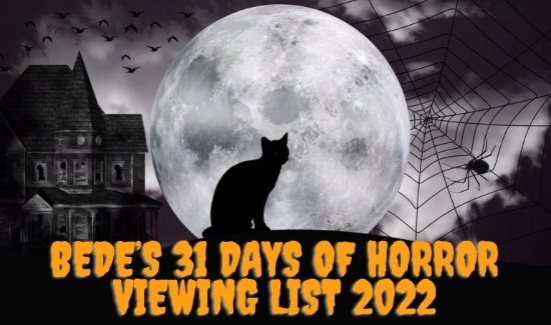 Well, everyone. October is almost upon us and you know what means? One of the best times of the year has come back around once again: the Halloween season. After spending the past two Octobers at home due to lockdowns brought on by the Covid-19 pandemic, it’s nice to see that this year’s Halloween will be one where both myself and everyone I know all over the world will be able to go out, socialise and celebrate the season like we did in previous years before all the madness of these past two years happened (as long as we make sure to keep ourselves safe and healthy of course, which is the most important thing). While I’ll be doing that as well but to be honest, I know what I’ll be spending most of my time doing and it’s something a lot of horror fans will be doing as well: watch horror films. Lots and lots of horror films. As you probably already know if you have been following here on the site over the years, I always like do something a little different with my 31 Days Of Horror list compared to everyone else’s. While most horror fans usually watch at least one film per day for their lists, I double the amount of films I’ll be watching by raising it to 62 instead. Yep, that is correct: 62 horror films. Which means I’ll be doing a double feature of two horror films every day throughout the month of October. I have been doing this for my 31 Days Of Horror nine times over the past decade and I always have a great time doing it because it gives me more horror films, both old and new, to check out. However when it comes to this unique 31 Days Of Horror viewing list, I do have some rules that I follow in regards to which 62 horror films I put on it:

1: All the horror films have to be ones that I have never seen before.

3: Sequels are not allowed to be included, only stand alone films instead.

By following these three rules, it makes it pretty easy for me to put together a list every year. This year’s list in particular is another great mixture of many different types of horror films: vampires, zombies, giallos, supernatural, slashers, psychological, horror comedies, anthologies, monsters, sci-fi horror, serial killers, cults, silent horror, werewolves, animated films, Italian horror, found-footage, folk horror, Hammer Horror, Asian horror and more. What’s really cool though is that for each day of the month, I’ve made sure to pair two films together that share some common link with each other. Whether they be from the same sub-genre, share a similar story or thematic elements etc. However I will make some exceptions when it comes to certain days though. Outside 62 horror films that I picked, I’ll also be adding a couple of bonus films on certain days of if they are being released in cinemas or making their official premieres on streaming services. Now the question remains: will I be able to watch them all? I’m hoping so. I know for certain is that the official 62 films that I picked for the list will without a doubt be my main priority to watch during the month (the bonus films aren’t hugely essential as they’re there as more of a extra film to check out if I have the time) but that being said, I’m going to attempt to check out all of them anyway regardless. It will be challenge, but I think I can do it. So without further ado, here’s my complete final viewing list of every horror film I’ll be seeing in October…

Well, there you have it. These are the films I’ll be seeing this year for Halloween. Keep a look out for my daily thoughts/mini-reviews for all of these films every day during October at www.twitter.com/BedeJermyn or on the Super Network Facebook page.