There’s no time like the present as creator/writer/director M. Night Shyamalan is back on the big screen and on our radars once again. A name that’s shared a commonality with brilliance, quality, mystique, and of course, complete and utter disasters. Since the critically and commercially successful ghost drama The Sixth Sense (1999), Shyamalan was helmed as the next big thing in cinema, as his brand of mysterious, quirky filmmaking and suspenseful supernatural/Sci-fi stories captured the curiosity and acclaim of audiences and critics alike.

Equal successes with Unbreakable (2000) and Signs (2002) made his stock continue to rise in hollywood with no proverbial end in sight. So much so that the “Shyamalan Twist” became a household phrase within pop culture itself. One that remains relevant to this very day.

But then, something strange began to transpire. Night started stalling out as a filmmaker, or at least, the adulation of critics and audiences did. With mixed reviews of The Village (2004) and monetary disappointment of Lady in the Water (2006), it appeared that his brand of storytelling just wasn’t meshing anymore with the populace. While his conceptualizing remained top-notch, the overall execution of said concepts left a ton to be desired. And it became abundantly clear after the unmitigated failures of the abysmal The Happening (2008) and abhorrent After Earth (2013) that M. Night’s rising star had fizzled out, nearly disappearing completely. So much so that when he took a step back and allowed others to build upon his premises, acting only as producer and story/co-writer in the hugely underrated Devil (2010), audiences couldn’t care less by that point.

When it seemed like all was said and done for the Night, he decided to go back to the drawing board and to his spooky roots, leading to the surprising success of the low-budget The Visit (2015), which turned out to be fairly competent and menacing. It reminded crowds and critics of Night’s non-waving ability to craft suspenseful tales with wit, tension, and authenticity within his characters, even the overtly eccentric ones. From there, he hit gold with the amazing James McAvoy in the immensely successful Split (2016), diving into some world-building by connecting that film with Unbreakable and connecting both with Glass (2019), turning one of his best stories from back in the day into a contemporary trilogy. AND it worked. It seemed like Shyamalan was back, his name and talents being respected again in the industry. Which of course, led us to his latest project.

Old (2021) is certainly another step in the right direction for Night, as he crafts, produces, writes, and directs a gorgeous and enigmatic nightmare that manages to turn much of his most notable weaknesses into strengths in this terrifying and dramatic tale. Whether that goal was intentional or not, nevertheless doesn’t change the results. This was definitely the Shyamalan we all know and loved from the beginning of his career, and I for one couldn’t be happier with what I experienced. It was only a matter of time.

As the story goes; A family take a trip to a tropical resort for fun, reflection, and relaxation. Once there, they head to a secluded beach with other vacationers to see more of the sights. Before the group can even get in a few hours of sun, a startling discovery is made – They’re all aging at an alarmingly rapid rate. Confused, scared, and literally running out of time, the group tries desperately to find a way off the mysterious beach and piece together what connects them to each other and this deadly phenomenon.

Right off the back I have to note that this is a sublime film to view upon as far as its beach setting. Shyamalan and cinematographer Mike Gioulakis of It Follows (2014) and Us (2019) fame did an exceptional job with the beauty of the sands, crashing waves, and mountain cliffs surrounding the beach while also adding a certain eerieness to it. Not a place where a thriller normally takes place unless you’re a fan of the television series L O S T (which I am. One of my absolute favorites), but they made it work in a way that kept the setting vastly bewitching yet spooky and intimate in equal measure. If I liked beaches I could see myself going to one like this. But thanks to this story, Lost, Jaws (1975), and maybe The Beach House (2019)….nah, I’m good. You kids have fun. 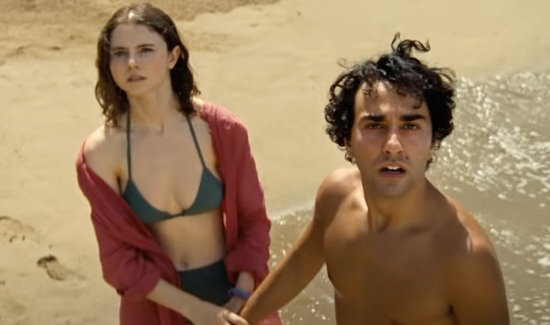 Anywho, I also have to talk about the pace as some critics found it rather disjointed, yet for this humble schmoe, it showcased the bewilderment of not only the dangerous situation at hand but our characters’ various mental and emotional responses to it. Considering this beach is an area where the laws of time and space are completely out of whack, it stands to reason our characters would feel the same. Thanks to the pacing and editing, we as an audience feel that same discombobulation to time being fast forwarded. The real-world implications are on full display when it comes to how the children experience time versus the adults experiencing the same thing. That kind of element worked in the film’s favor along with the atmosphere, which kept the looming dread and tension as thick as frozen molasses. Could literally feel it coming off the screen. But the savagery that befalls some of our vacationers is especially harsh and wince-indicing. This was by far one of M. Night’s nastiest numbers, pushing the boundaries of that PG-13 rating yet again. A trend I’m definitely seeing this year with A Quiet Place Part II (2021), Black Widow (2021) and other features. Loving it all the same too. One sequence in particular managed to legitimately bring one of my hidden fears to life the way I always envisioned it in my paranoid cranium, so got to give Night major props for that one because no other thriller or horror film has ever done it before.

Performance wise, the entire cast ranges from serviceable to fantastic. Gael García Bernal, Vicky Krieps, Eliza Scanlen, Thomasin McKenzie, Abbey Lee, Aaron Pierre, Rufus Sewell, Ken Leung (A former L O S T cast member back at the beach again), Nikki Amuka-Bird, Eliza Sanlen, Abbey Lee, and the incredible Alex Wolff who was Night’s best choice to be in this. The kid possesses such enormous range, especially in horror films, which I’ve been a fan of since that modern horror masterpiece I can’t stop praising; Hereditary (2018). Wolff, Bernal, Sewell, and Thomasin were the stand-outs here but the rest still brought it and even had some palpable chemistry in parts.

Which leads me to the “Twist” in true Shyamalan fashion….Now, without spoiling anything, Does he nail it this time around? I would have to say he emphatically does but with a few tiny caveats. Even though the twist doesn’t explain everything completely, it was a worthwhile conclusion to a tense and taut ride, bringing further legitimacy to moves, scenes, even lines that were a bit off at first glance. In a way it echoes the twist in Underwater (2020), not the revelation itself but the power of it raising everything else up and opening the doors of the mystery a bit wider for interpretation and analyzation. And if that wasn’t good enough, Night was able to turn his weaknesses as a writer into a strength with this reveal. It may be a bit jarring in retrospect, but it implictly works. Time will definitely be on this film’s side in the long run.

Bottom line, O L D is a great success for Shyamalan as a director. Sure he may have a ways to go in other departments but this is certainly one of his best features since his comeback. A gorgeous, mystifying, and entrancing fare that drops us right into the thick of its timey-wimey, wibbly-wobbly mystery and surprises with its drama, connections, and cruelty. Time isn’t a flat circle but a jumbled struggle into the abyss, with an ending that challenges as well as chills. M.Night may not be the triple threat that he once was, but with entries like this, he’s reminding us why we as an audience should move on from his past missteps, giving him a chance with future stories. Because above all else, he’s going to give us something to witness.

Time heals all wounds…and marches on.