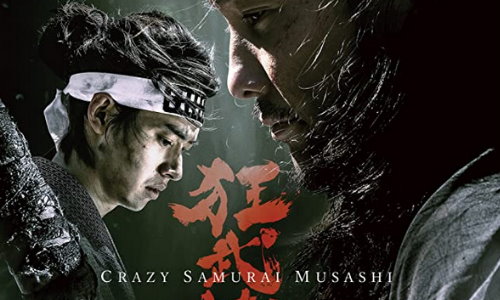 The life of legendary Japanese swordsman and philosopher Miyamoto Musashi has been the subject of countless films, TV shows, books, animes and mangas  over the years. Most notably the SAMUARI trilogy (1954-1955), which starred legendary actor Toshiro Mifune in the role Musashi. When you look over his entire life story, it’s hard not to understand why he has been the subject of popular culture. Now director Yûji Shimomura and screenwriter Sion Sono (a director in his own right) have come together to make a new film centered around Musashi (starring Tak Sakaguchi in the role) and one of his most famous battles. However their take is far more ambitious than any other film about Musashi has been done in the past: of the the film’s 91 minute running time, 77 minutes of it is dedicating to a long and unedited real time action sequence that was shot entirely in one-take.

The following review of the film is in an audio format. Enjoy!

Director: Yûji Shimomura
Writer: Sion Sono
Starring: Tak Sakaguchi, Akihiko Sai and Masaaki Takarai.
Synopsis: This film, taken around the time of “Out and Deluxe,” consists of the most famous battle of the swordsman Miyamoto Musashi. In this 77-minute, one-scene, no-cut action sequence, Miyamoto (Tak Sakaguchi) defeats 588 enemies, one after the other. There is no room for error, no room for corny or unconvincing moves.
Credit: IMDB.com

Crazy Samurai Musashi (2020) is playing as part of the Fantasia Festival – https://fantasiafestival.com/en/film/crazy-samurai-musashi