“We’ll always be together, together in electric dreams” we all know that classic 80’s tune from Philip Oakey and Giorgio Moroder, perhaps lesser known is the film Electric Dreams (1984) that the song was written for. The popularity of the song certainly overshadowed the film, perhaps some what unfortunate as Electric Dreams is quite an entertaining little gem from the 80’s. In a decade where computers made a big impact in cinema, with films like Tron (1982), WarGames (1983) and Weird Science (1985), this one takes an interesting approach and explores love and relationships.

The film centers on architect Miles Harding (Lenny von Dohlen), who decides to buy himself a computer in order to help organise his life and allow him to focus on his personal project. Madeline (Virginia Madsen) a classical musician moves into the apartment upstairs, and at first doesn’t take much notice of Miles. Then one day as Madeline plays her cello, Edgar (the computer) hears her music and plays along, which leaves her more intrigued by Miles. Not is all as it seems with the smart computer however, due to some sort of event (champagne being poured all over it or the hacking of Miles’ bosses system), Edgar begins to show signs of A.I. and becomes a rival of sorts with Miles over Madeline.

While the film has a focus on a computer gaining A.I. and its own focus on Madeline is interesting, as it wants to understand love. This comes about with Madeline playing her music and entering Miles’ life, as Miles falls for her he wants to impress her with the music she heard. He works with the Edgar to make a song, but it turns more sinister as Edgar gets more and more obsessive. This storyline of Miles and Edgar is quite intriguing, and the things Edgar can do is closer to what technology can do today. It almost feels like a prediction, and it is far more accurate than other films and their portrayal of technology. It is entertaining to see an 80’s machine able to do household tasks like control lights or doors, and its only in the more recent years we can do this with technology. But at its heart this is a love story, between two people who find each other and gain a connection. 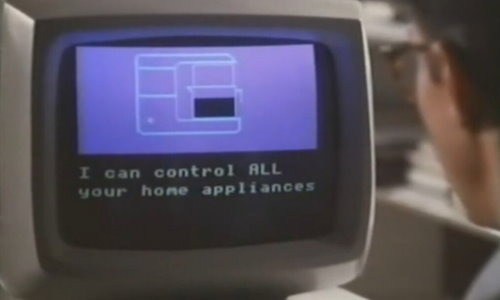 Lenny von Dohlen is very good as Miles, he managed to portray a lonely and awkward person convincingly and his scenes with Edgar are well handled. Virginia Madsen is very cute, and the two leads share a good chemistry and their scenes together really bring the movie together. The central idea makes this a unique film, a computer wanting to know love, while two people experience it and lessons are learnt, through lots of funny encounters. Where the film feels weak is through the pacing, it moves a bit slow in scenes that shouldn’t be slow and speeds up a little when it shouldn’t. For a directorial debut for a music video director in Steve Barron, it is a very solid effort and its strengths lie in its visuals as much as the story.

Electric Dreams is a film that should be remembered more, it is a fun film with good performances and a great soundtrack filled with 80’s goodness. It might not be a perfect film, but watching it now makes it such an interesting one. There are some great memorable scenes including the dual music playing with Madeline and Edgar, the awkward first date and the day trip to Alcatraz is a lot of fun. The film serves as a good reminder to explore what love is and enjoy the crazy ride that comes with it. Just make sure Siri or Alexa don’t take a page out of Edgar’s book, put the phone down and live life.