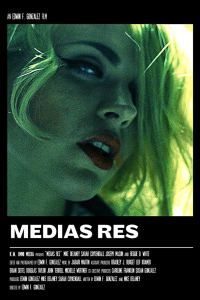 I don’t know about anyone else, but I enjoy a good neo-noir film. It’s a sub-genre of film that doesn’t get talked about as much as the major ones these days like action, horror, sci-fi etc., but it is one that you can always find reliable if you’re looking for a good quality film. Over the pass few decades we’ve seen many great films come out of this sub-genre. Especially in the independent film scene, where a lot of the best and most interesting ones have been made. One of the latest indie neo-noirs to be released is MEDIAS RES starring Mike Delaney (who also co-wrote the script), Sarah Coykendall & Joseph Mason and co-written/shot & directed by Edwin F. Gonzalez, which is now available to watch on both Amazon Prime Video U.S. and U.K. The following review of the film is in an audio format. Enjoy!

Synopsis: Dave and Joe, just evicted from their Oakland apartment, turn to stealing cars and dealing Fluoride to make their financial ends meet. One night they find Summer Hayes, star of a popular 1990’s teen soap, in the trunk of a stolen automobile. Shoot-outs, car chases, and overdoses ensue. In the Fluoride heightened world of MEDIAS RES, nothing is what it first appears to be.