Hey, everyone! Welcome to my 62nd edition of my Bad Movie Tweet-A-Thon series! As you already know earlier this month here on SuperMarcey.com, I posted up poll with three bad movies and I said that whichever one out of those three films had the highest votes, I would watch and live-tweet for this column. Well, the votes are in and you all have spoken. For this 62nd instalment of Bad Movie Tweet-A-Thon, you guys wanted me to watch and live-tweet… RTHEODORE REX! Was Whoopi Goldberg basically blackmailed into doing this film? Is this really one of the worst dinosaur related films ever? Read on and find out! Enjoy! 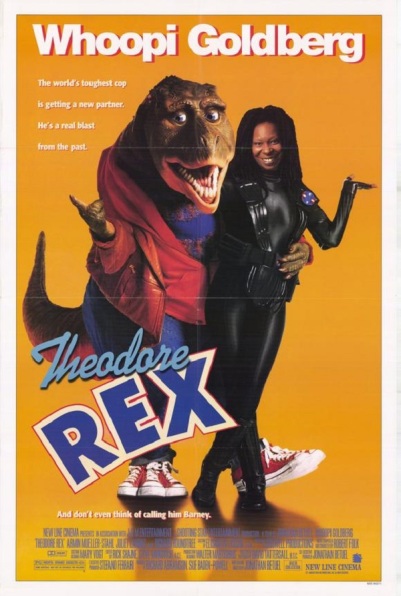 I know I’ve said this many times but I’m going to say it again, is it too late for me to *not* watch this film? #TheodoreRex

Ahhh… If this film is suppose to be a buddy cop/murder mystery film? Why does it tell us who did it and why they did it right off the bat with the bizarre opening narration? #TheodoreRex

A B&W scene that has a little bit of colour in it? Take PLEASANTVILLE and SIN CITY! This film one of the first to do that before you! #TheodoreRex 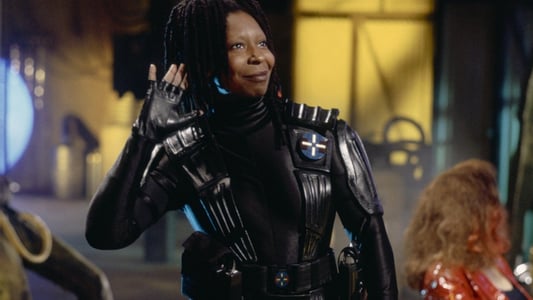 Oh, my God. The animatronic puppet of Theodore Rex is hilariously bad. Seriously, the mouth movements don’t even match his voice lol. #TheodoreRex

So… Since Theodore is a T-Rex and they biologically have very short arms as he does here, how is he able to get his clothes on? #TheodoreRex

Poor Whoopi Goldberg. The look that she has on her face every time she is onscreen pretty much tells us that she doesn’t want to be in this film. Shes not even hiding it. #TheodoreRex

What the hell is up with Bud Cort’s character in this film? He’s absolutely bizarre. #TheodoreRex

I don’t know what type of cop uniform Whoopi is wearing, but I’m pretty sure no cop would ever wear that. #TheodoreRex

Is it just me or does Whoopi’s partner look like Bob Odenkirk? #TheodoreRex 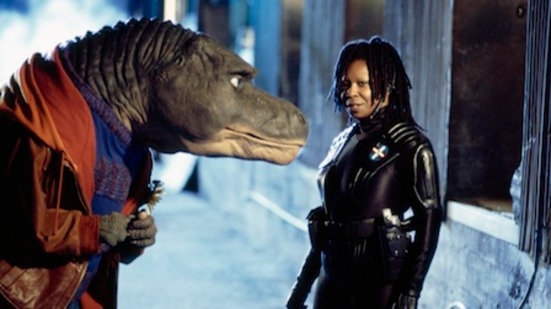 My favourite parts of this film is whenever Theodore is opposite a human character, the actor has a look on their face that says, “I’m sharing the same scene with *that*?!” #TheodoreRex

“I’m not good with surprises.” “Especially if it’s a law suit that forces me to star in a film called THEODORE REX.” #TheodoreRex

Richard Roundtree! Sadly not even the presence of the original John Shaft can save this film. #TheodoreRex

Oh, hi Armin Mueller-Stahl. Don’t worry your career will get back on track a few months after this film with SHINE. #TheodoreRex

Dammit, Theodore! Stop eating all the cookies or Arnold Schwarzenegger will be upset! #TheodoreRex

You know I don’t think it was hard for Whoopi to get into character as an annoyed and pissed off cop. Those were the emotionals she was already feeling when she was forced to be in this film. #TheodoreRex

Yeah, sorry. It’s not mystery if we already know who did it and why. So this whole investigation that Theodore and Whoopi have been assigned to is just pointless for us as an audience. #TheodoreRex

Ahhh.. Did Theodore just have an orgasm while touching the body of that dead dinosaur?

Oh, man. That dinosaur is talking but it’s mouth isn’t even moving

A vegetarian T-Rex? Now I’ve heard of everything. #TheodoreRex 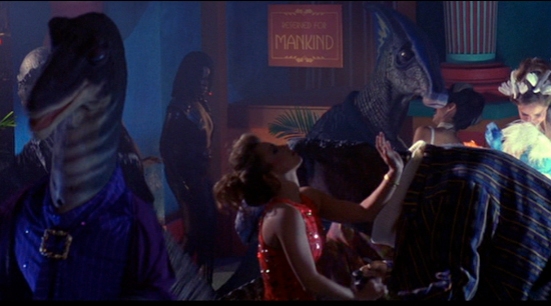 Oh, geez. There’s a dinosaur singing a song on stage at this night club. The mouth movements don’t match up with the song at all, it’s hilarious

Whoopi has gone into hysterical laughter. Yep, this film has mentally broken her so much that she snapped. #TheodoreRex

Wait… Dinosaurs have a telepathic link with each other? Okay… #TheodoreRex 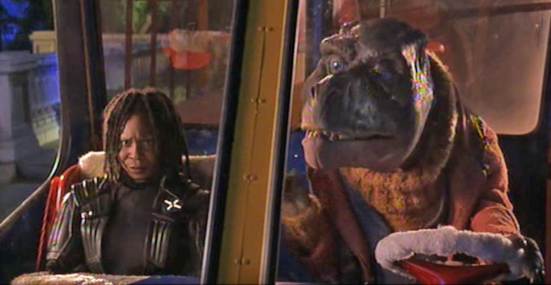 I don’t know about anyone else, I think Bud Cort is channelling Truman Capote with his character’s voice in this film #TheodoreRex

So… Bud Cort’s henchmen’s tactic to stop Theodore’s involvement with this case, is to spray his car with shaving cream? Okay… #TheodoreRex

Oh, geez, Whoopi. Don’t ask Theodore if has a gun. If he did have one, he wouldn’t be able to reach for it due to his short arms. #TheodoreRex

Ahh… I think something is wrong with the Theodore puppet ‘cause eyes went completely wonky after he went psychotic again. #TheodoreRex 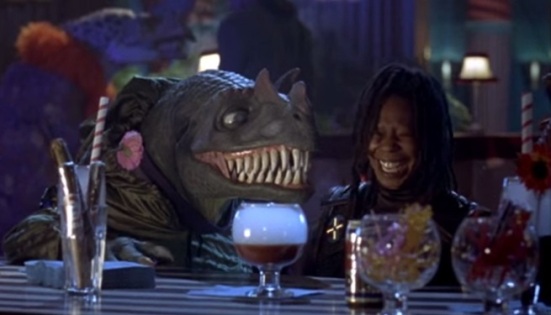 I like how after Whoopi says, “You can’t judge a Dino by his scales”, she literally looks right at the camera in disgust

Wait, there’s a machine in the future that can magically change you’re clothes? Geez, the future is lazy. #TheodoreRex

Oh, dear. Theodore is wearing a stereotypical Mexican costume and he’s doing a bad accent to boot. This is starting to get a little racist

I like how Theodore is looking for clothes that’ll help him look like an undercover cop, are basically the exact same clothes that he’s been wearing in the film prior to this scene lol. #TheodoreRex 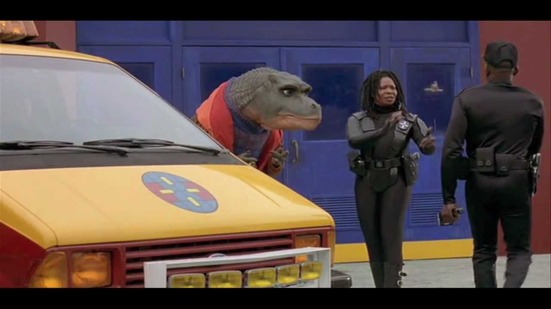 So Whoopi & Theodore’s new cop car is garbage truck and the only way for Theodore to fit in it, is to get in the back with the rubbish. Somehow this is symbolic of the whole film. #TheodoreRex

Is it just me or did Stephen McHattie base his look in the film on Michael Wincott’s look in THE CROW? Cause they look very similar. #TheodoreRex

I like how Juliet Landau is just plain rude to Whoopi for no apparent reason and then Whoopi just throws it back in her face lol. #TheodoreRex

Wait, a minute! Hold the phone! The Chiodo Brothers of KILLER KLOWNS FROM OUTER SPACE fame did the puppet effects for this films?! My God…

I honestly have no idea what’s going on in this funeral scene. #TheodoreRex

Man… Those dinosaur costumes who have been an absolute pain in the arse to walk around in. #TheodoreRex

Umm… I don’t know about anyone else but Theodore and Molly Rex dancing around and flirting in this scene is disturbing me on many levels. #TheodoreRex 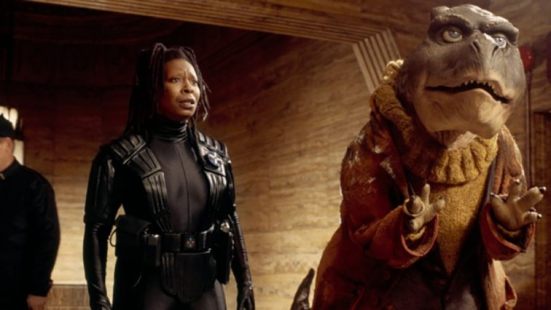 Wait… Did Theodore and Molly just get engaged?! Geez, that was quick. They give Adriana Grande & Pete Davidson a run for their money. #TheodoreRex

There’s a character in this film called the Toymaker? Please, please, please let him be played by Mickey Rooney. #TheodoreRex

I don’t know about anyone else, but I want a spin-off film that’s on the Guy In The Bag puppet. #TheodoreRex

I think this scene with the Toymaker would be 10 times better if all the little puppets were all the ones from the PUPPET MASTER series instead. #TheodoreRex

“It’s a hairy hot dog!” That’s what she said. #TheodoreRex

Ahhh… Why is Theodore doing impressions of Schwarzenegger, Stallone and Nicholson? On second thought, don’t answer that. #TheodoreRex

Whoopi & Theodore? Why are you taking literal baby steps away from that bomb? Bloody run, dammit! #TheodoreRex

Theodore is interrogating the Toymaker by farting long and hard on him… Yes, this is actually happening. #TheodoreRex

So… Why did the bad guys kidnap that teenage friend of Whoopi’s? There’s no reason for it to be honest. #TheodoreRex

Again, what’s the point of this kid being there again? #TheodoreRex

Whoopi & Theodore just crashed in a plane into the bad guy’s lair. That crash pretty sums up this entire film as well. #TheodoreRex 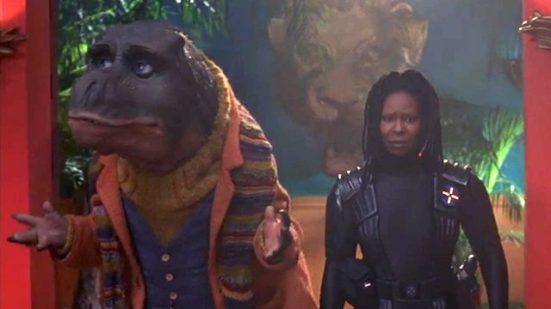 I know that Juliet Landau is doing a British accent but it clearly doesn’t sound like one at all. #TheodoreRex

Hey, Bubbles the Chimp! Okay, isn’t but I’m going to pretend that it is. #TheodoreRex

“I’m so ill” I bet any money that’s what Whoopi said everyday during this shoot. #TheodoreRex

Holy shit! The bad guys shot Whoopi and her robot body is shooting off sparks! This is unexpected. #TheodoreRex

I like how the bad guy’s car just simply exploded after it went through that sigh. #TheodoreRex 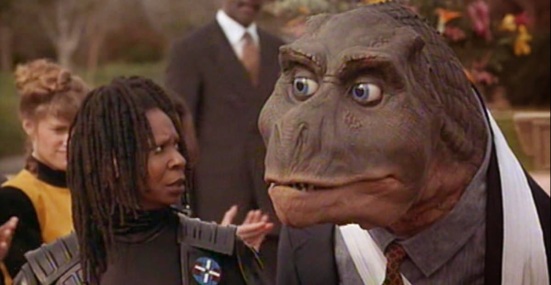 Ewww… That creepy dinosaur from the club earlier is back at this ceremony to look at Whoopi. #TheodoreRex

“Katie, I think this is beginning of a beautiful friendship” “Nope! I’m done with you and this movie. Bye!” #TheodoreRex

I like how the film just ends with a title card that simply says “See Ya”. #TheodoreRex

Well, that’s the end of the movie. Well, I can tell you one thing: I can definitely Why New Line Cinema decided to release the film in straight-to-video instead having it play in cinemas now. #TheodoreRex

I hope everyone enjoyed reading this 62nd edition of my Bad Movie Tweet-A-Thon! Keep a look out later in August for my 63rd edition, which I could be doing on one of the following three bad films: BEVERLY HILLS COP III, CADDYSHACK II and MISSION: IMPOSSIBLE II. Which one will it be? Vote on the poll which will be posted on SuperMarcey.com soon!