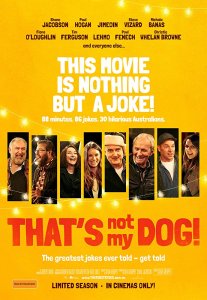 When I think of the best qualities that my home country of Australia has, it’s definitely without a doubt our unique sense of humour. Over the decades Australia has produced many film comedies that have gone on to become complete classics of the genre (CROCODILE DUNDEE, THE CASTLE, MURIEL’S WEDDING, KENNY, THE ADVENTURES OF PRISCILLA, QUEEN OF THE DESERT and so many more). Now actor/comedian Shane Jacobson (KENNY) and director Dean Murphy (STRANGE BEDFELLOWS, CHARLIE & BOOTS) has assembled an all star of great Aussie comedic talent together for a unique experimental comedy that’s unlike anything that you have seen before. Did this bold move work and deliver a comedy classic? Or did it sadly fail to live up to its unique premise? The following review of the film is in an audio format. Enjoy! 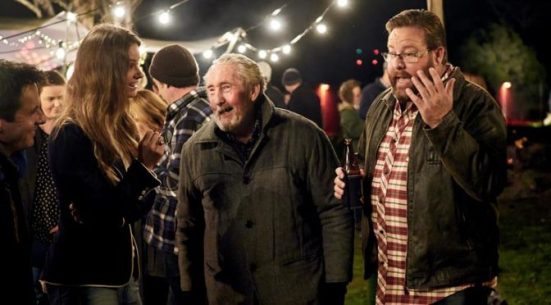 IMDb Synopsis:  THAT’S NOT MY DOG is a joyous comedy that celebrates our love of joke telling. The film centers around the lovable Shane Jacobson (playing himself) who is throwing a party. Invited are the funniest people Shane knows comprising of Australia’s biggest stars along with several Australian music legends playing their biggest hits live, right throughout the party. The invite that goes out is clear. Don’t bring meat. We’ll provide the beer. Just come armed with nothing but the funniest jokes you’ve ever heard. Shane will take care of the rest. It’ll be a night of great friends telling the world’s funniest jokes over a beer and BBQ.