Hey everyone! Welcome to my 57th edition of my Bad Movie Tweet-A-Thon series! Once again I apologise that I didn’t post this online much sooner. I was hoping to have this already by the end of February but over the pass weeks, I was hugely busy due to a wedding, work and a whole bunch of other stuff. As you already know last month here on SuperMarcey.com, I posted up poll with three bad movies and I said that whichever one out of those three films had the highest votes, I would watch and live-tweet for this column. Well, the votes are in and you all have spoken. For this 51st instalment of Bad Movie Tweet-A-Thon, you guys wanted me to watch and live-tweet… MOONWALKER! What possess Michael Jackson to make this film at the high of his career? Is this without a doubt the most bat shit insane vanity project of all time? Read on and find out! Enjoy!

I know I’ve said said this many times before in the pass but I’ll say it again: is it too late for me to *not* watch this film? #Moonwalker

You know it still surprises me that even though this film came out at the peak of his career during the ‘80s, this film went straight-to-video instead hitting cinemas like it was originally intending to. #Moonwalker

Yep, no matter how many times I hear it, “Man In The Mirror” is just a great bloody song. #Moonwalker 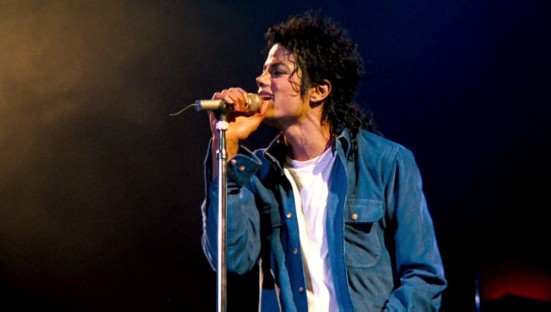 Geez, there’s a lot of people in that stadium. #Moonwalker

“I’m Michael Jackson, I am your Lord now.” #Moonwalker

Let’s just get this out of the way: this film is definitely a self absorbed vanity project for Jackson. Although it’s very much a fascinating one though. I couldn’t see any music stars doing something like this today. Well… Maybe except for Kanye West. #Moonwalker

Ahhh… I don’t know why that TV just turned into a spaceship but believe me, that is the least strange thing that happens in this film. #Moonwalker

If you don’t know who Michael Jackson is, here’s a quick recap of his career so far to get you up to speed. #Moonwalker

There’s a robot that’s dancing just now, I guess you could say that is a… Wait for it… “Dancing Machine” hehehe. #Moonwalker

Okay, that joke was pretty lame. I apologise. I’ll see myself out lol. #Moonwalker

Don’t mind me I’m just sitting here dancing along to this montage of Jackson’s music. #Moonwalker

Yeah, young people will never get how huge star Jackson was back in the day. No other singer since that time has ever match Jackson in terms of popularity. #Moonwalker

I don’t know why Jackson and his dancers are humping the floor in that segment from the music video for “The Way You Make Me Feel” but it’s disturbing. #Moonwalker

Oh, no! Kids have literally replace Jackson and his dancers in the “Bad” music video! I do not approve of this kid friendly remake at all. #Moonwalker

I like how all the kid dancers all have drawn on facial hair. It’s hilarious! #Moonwalker

Yeah… Some of these kids are a bit out of sync when it comes to dance moves. #Moonwalker

Don’t ask me why but this segment would be way better if Pennywise just showed up to randomly eat the kids. #Moonwalker 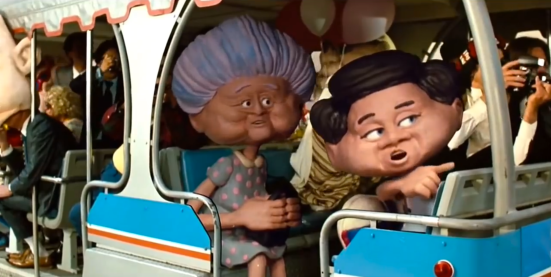 Ahhh… What is up with these claymation tourists that Jackson runs into? They are bloody terrifying! #Moonwalker

I like how Jackson’s bodyguards basically turn into characters from SOUTH PARK when they get flatten by those tourists. #Moonwalker

Is it just me or just claymation director on that western set look a little bit like Steven Spielberg? ‘Cause he kind of does. #Moonwalker

What was it with the ‘80s obsession with ugly looking puppet heads? It seems like every singer and band around that time had them in their music videos. #Moonwalker

Oh, hi claymation Sylvester Stallone and Tina Turner. You’re just as scary as claymation if you would be. #Moonwalker

Yeah, for some reason a claymation version of Pee Wee Herman just randomly showed up as well. #Moonwalker

Hmmm… I’m not sure how I feel about Michael Jackson’s remake of MAD MAD 2: THE ROAD WARRIOR. #Moonwalker

Jackson is having a dance off with that claymation rabbit. I don’t know who directed this whole film but I’m going assume that they were taking a lot of cocaine when they were making it. #Moonwalker

I don’t know about anyone, but I honestly that motorcycle cop character that Jackson runs into should have been played by Michael Ironside. #Moonwalker

Now with that while weird sequence out of the way, we’re now onto the classic music video for “Leave Me Alone”. Why is it here? I suppose the extend the running I guess. #Moonwalker

I honestly don’t know why there are dogs wearing suits in this music video but believe me it’s the least weirdest imagery in it. #Moonwalker

Finally! After 30 minutes of filler, where finally onto the actually ‘movie’ section of this whole film. #Moonwalker

Fun fact: one of the kids who plays as one of Jackson’s friends in this section is future singer/songwriter Sean Lennon, who’s the son of Yoko Ono and the late John Lennon. #Moonwalker

Hey, that’s a nice suit your wearing Jackson. Make sure not to get it… HOLY SHIT! Jackson is being shot at by a whole army of soldiers! #Moonwalker 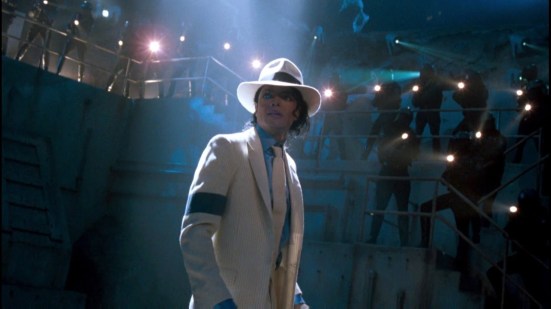 Meanwhile in this flashback… #Moonwalker

How come every time the little girl says ‘Michael’, it sounds like she’s saying ‘My God’? #Moonwalker

Hey, Jackson! Mister Rogers called and he wants his red sweater back! #Moonwalker

Ahhh… Why is there a factory inside a mountain? On second thought, don’t answer that. #Moonwalker

Hey, it’s Joe Pesci and he’s playing the bad guy! Why am I not surprised? #Moonwalker

So… Pesci’s evil is that he wants to get kids onto drugs? Yeah, that’s awful and all but based on his secret hide out, army and advance tech, he would want to rule the work or something. #Moonwalker

I like how Pesci’s hair looks like it’s done up into the weirdestlooking man bun of all time. #Moonwalker

Also I really like how you can tell Pesci is trying he’s damn hardest not to swear his head off during this segment. #Moonwalker 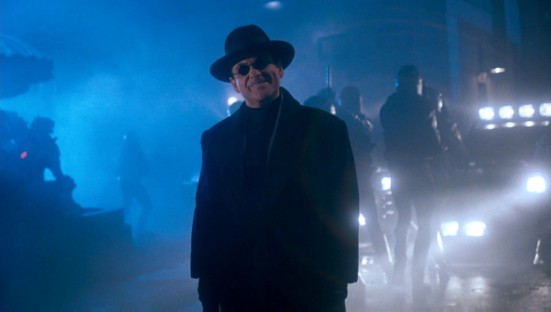 Geez, Jackson is giving Tom Cruise a run, no pun intended, in the running department as he escaping from the bad guys. #Moonwalker

Geez, Pesci. Jackson is literally hiding RIGHT BEHIND YOU. How did you not see much sooner? #Moonwalker

Ahhh… Did Jackson just transform into a car?! Why?! Is he a TRANSFORMER?! It doesn’t make any sense! #Moonwalker

“What the hell was that?!” Don’t worry, Pesci. I have been having the same reaction as well to everything that had been happening so far in this film. #Moonwalker

I’m sorry, Michael, but no matter how many times you try, you can’t remake MAD MAX. #Moonwalker 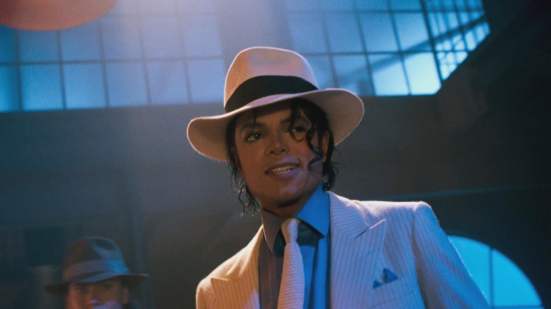 As much as I think that “Thriller” is the greatest music video of all time, this one for “Smooth Criminal” is definitely a very, very, very, VERY close second. #Moonwalker

Seriously, everything about this music video is just simply pitch perfect. It’s a masterpiece plain and simple. #Moonwalker

I like how Jackson shoots that guy and he just goes flying through the wall leaving a human shaped hole behind. #Moonwalker

Ahhh… What’s going on? It sounds like everyone is having a massive orgasm right now. #Moonwalker

Oh, thank God that was over. I was pretty disturbed by all of that. #Moonwalker

I don’t about anyone else, but I think one of the kids should have been played by Denny from THE ROOM. #Moonwalker

Holy crap! Pesci is slapping around that little girl! #Moonwalker

Wait… Hold the phone! Jackson is turning a robot! WHAT THE HELL IS GOING ON?! #Moonwalker

Man, they must have spent a LOT on this section of the film. #Moonwalker

I like how Jackson just completely murdered Pesci and his henchmen. #Moonwalker

A shooting start just hit Jackson and he exploded in the sky. What downer of a way to end this film. #Moonwalker

Whoops! Spoke too soon. Jackson is alive! Thank goodness ‘cause I was worried there for a sec. Not really but whatever. #Moonwalker

Don’t take those kids into the light, Jackson! #Moonwalker

Ahhh… Yeah.. Jackson leading a the kids down a dark and dirty underground corridor. This is kind of creepy.  #Moonwalker

Okay, we’ve got one more music video. This time it’s for his cover of The Beatles’ classic song “Come Together”. I think that this is a pretty solid cover myself. #Moonwalker

Why is Jackson wearing a WWE Championship belt? #Moonwalker

When that’s the end of the film. As completely insane and nonsensical as this film is, it’s pretty watchable and memorable because of that. Plus being Jackson fan myself, I definitely got something out of it. #Moonwalker

I hope everyone enjoyed reading this 57th edition of my Bad Movie Tweet-A-Thon! Keep a look out later in March for my 58th edition, which I could be doing on one of the following three bad films: CAN’T STOP THE MUSIC, MY SOUL TO TAKE and TOP DOG. Which one will it be? Vote on the poll which will be posted on SuperMarcey.com soon!