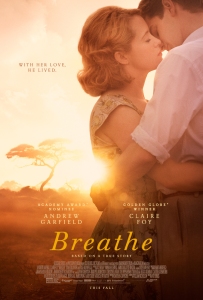 I don’t know about anyone else but when I hear that a critically acclaimed actor decides to make the jump from acting to directing, it definitely catches my interest right away. Especially if it’s one who I’m a big fan of. One actor in particular who definitely fits this bill is Andy Serkis. After years starring  in major Hollywood productions like THE LORD OF THE RINGS trilogy, the PLANET OF THE APES reboot series and BLACK PANTHER, Serkis steps behind the camera to make his directorial debut with BREATHE, which tells the true story of disability advocates Robin & Diana Cavendish. The following review of the film is in an audio format. Enjoy!

IMDb Synopsis: The inspiring true love story of Robin and Diana Cavendish, an adventurous couple who refuse to give up in the face of a devastating disease. Their heartwarming celebration of human possibility marks the directorial debut of Andy Serkis.