Hey everyone! Welcome to this very special 50th edition of my Bad Movie Tweet-A-Thon series. Man, I can’t believe that this is my 5oth one. When I first came up with the idea for this column a couple of years, I thought that it would be a fun to series to do since I’m a big fan and appreciator of all things bad cinema (plus since I have the reputation of being the Terrible Australian, it was a guaranteed that I would do it at some point). I honestly didn’t think that Bad Movie Tweet-A-Thon would catch on but here we are, 50 issues. It has been quite a fun ride I can tell you that.  If you remember about a month back I decided to celebrate this special milestone that instead of asking you readers to pick which bad film I should watch and live-tweet for it, I would pick the film myself. So which bad film have I chosen for this 50th edition of the article? I decided to do it on one of the infamous and notorious bad films of all the all time: the 1979 film CALIGULA! Was this film just made so that the producers could make the biggest budgeted porno of all time? How on earth did they manage to get a major Hollywood cast for it? Read on and find out! Enjoy!

I know I’ve said this many times before but I’m going to say it again, is it too late for to *not* watch this film? #Caligula

Geez, we’re not even 20 seconds into this film and we’ve already got nudity on the screen. #Caligula

Oh, hi Malcolm McDowell! I wonder how money they paid you to be in this film? #Caligula 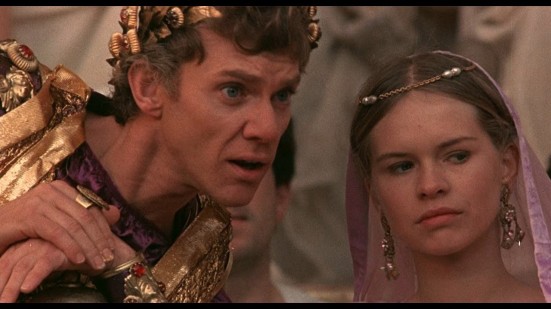 That being said, Malcolm McDowell will always be a total bad arse for life. #Caligula

I’m not going to go into the back story about how this film turned out the way but you all should read it. It’s very interesting. #Caligula

I like how Gore Vidal is still credited as the screenwriter even though he’s script was basically thrown out. #Caligula

Yeah… Caligula, I don’t think you’re fooling anyone by pretending to be asleep. #Caligula

I don’t think it’s a good idea for this prisoners to be naked while breaking rocks. They’ll get seriously sunburnt. #Caligula

Geez. I thought that SHOWGIRLS had more boobs in its first 10 minutes than all of cinema but this film takes the cake easily. #Caligula

Peter O’Toole. Always have and always will be a complete utter legend. #Caligula

Oh, by the way, that’s not Peter O’Toole in character as Tiberius. That was just him on a regular normal day. #Caligula

Now for some reason Caligula is dancing. His dance moves remind me of Pee-Wee Herman. #Caligula

I don’t know why this film keeps cutting to random close up shots of people’s body parts. It’s like… What? #Caligula

I don’t blame O’Toole for asking for more wine. I would drinking a lot of it too if I were involved in this film as well. #Caligula

I honestly have no idea what is going on. #Caligula

I don’t know how both McDowell and O’Toole were able to keep a straight face with everyone having actual sex all around them. #Caligula

Ahh… Did I just see a guy with four legs and another guy with three eyes and two mouths? What is happening?! #Caligula

Yeah, this scene with McDowell and O’Toole is going on way too long than it needs to be. #Caligula

You know I’ve seen a lot of scenery chewing in my time but O’Toole’s performance here is next level stuff. #Caligula

Wait… Caligula and his sister are lovers?! EEEEWWWWWW!!! #Caligula

I honestly think that McDowell said yes to this film so he could touch boobs all day. #Caligula

Oh, John Gielgud. Even when you’re in a film like this, you still give a good performance. #Caligula

Naked people in chains. the Now that’s title of an exploitation film right there. #Caligula

Oh, geez. The amount of violence in this film is a bit full on. #Caligula

You know I’ve never noticed how piercing blue McDowell’s eyes are. It’s quite something. #Caligula 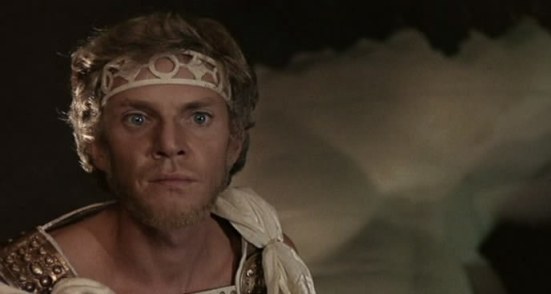 You know what’s funny? If they cut out all the sex and nudity, this film would probably only about 10 minutes long. #Caligula

Caligula really wants that ring from Tiberius, doesn’t he? He’s basically turning into Gollum right front of our eyes. #Caligula

Well, Tiberius has been murdered. I bet O’Toole was happy about that ’cause that means he no longer has to be in the film. #Caligula

Wait, hold the phone! We’re in a scene that doesn’t have any sex or nudity?! This is like seeing a unicorn. #Caligula

I like how the actor who plays Caligula’s basically has a stunned look on his face throughout this entire film. #Caligula

You know even though some of the sets look pretty cheap at times, there are some that do look pretty impressive. #Caligula

Damn, Marco. I bet you wished that you didn’t killed Tiberius for Caligula now, huh? #Caligula

Me every time Caligula is with his sister. #Caligula

Geez, McDowell. At least take Mirren out to dinner first before you have sex with her. You only met literally 5 minutes ago. #Caligula

Wow. That’s quite a large and elaborate machine just to chop off someone’s head. #Caligula

Yeah, if I were one of those actors buried in the ground and that machine was coming towards me, I would be crapping myself. #Caligula

Man. The awful wigs in this film are hilarious. #Caligula

Speaking of awful things, some of the dubbing in this film is pretty awful as well. #Caligula

Oh, dear. I know where this scene is going with Caligula and this newly married couple… So… Yeah… #Caligula

Ahhh… Caligula… You’re not doing what I think you’re doing with mashed potatoes are you? #Caligula

Now Caligula is dancing around naked in the rain. I’m seeing way too much of McDowell right now. #Caligula

So. Many. Unnecessary. Close. Ups. #Caligula

Wait, hold the phone! They had dice back in the Roman times?! #Caligula

Man, those spinning plates have been going a while. #Caligula 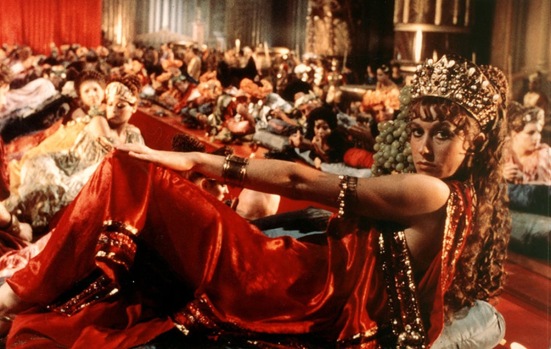 See McDowell! Mirren just showed you how you should be dancing. #Caligula

Caligula just spewed up. Funnily enough that’s the same reaction that everyone had after watching this film. #Caligula

Ahhh… Why is there a horse in bed with Caligula? On second thought, don’t answer that. I don’t need to know. #Caligula

Hey Peter Garrett! If any non-Aussies out there are aware of the band Midnight Oil, you’ll know who I’m talking about. #Caligula

Wait… Caligula is torturing and murdering one of his men for treason ’cause he is loyal to him? #Caligula

Two women are peeing on a dead man’s corpse. This movie has no shame whatsoever. #Caligula

Plus they are doing other really awful things to his body as well. Which I’m going to mention here ’cause gross. #Caligula

Seriously my face has been like this every 20 seconds or so during this film so far. #Caligula

Noooo! Caligula’s beloved sister is dead. Well on the bright side, we won’t have anyone scenes of them… Together *shudders* #Caligula

No… No… Noooo… Caligula isn’t doing what I think he’s going to doing to his sis-OH, MY GOD! NOOOO!!! #Caligula

This film is just straight up crazy bananas now. #Caligula

I’m not sure what the whole point of this scene with Caligula pretending to be a peasant among his people. It really adds nothing. #Caligula 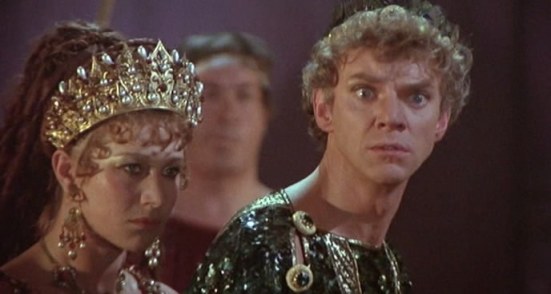 This film would be way better if it just Malcolm McDowell and Helen Mirren both playing all the characters. #Caligula 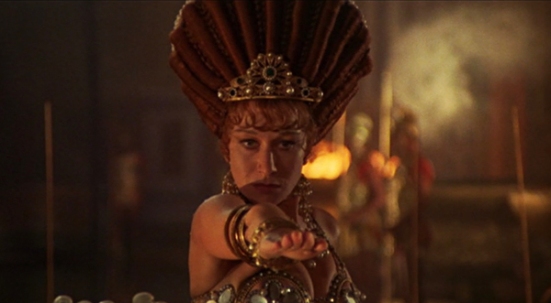 I don’t know about anyone else but every time I hear the name Longinus, it just makes me laugh. #Caligula

I don’t know why Caligula is sending his soldiers into battle naked. I just don’t know. #Caligula

There’s a lot of really weird facial hair in this film. #Caligula

I gotta say this scene where the senators are about to kill Caligula and his family, is actually surprisingly intense. #Caligula

The senators are all plotting to assassinate Caligula. About time too ’cause I want to this film to be over. #Caligula

So much blood. #Caligula

Oh, geez. Those soldiers are piercing the crap out of Caligula’s body, aren’t they? #Caligula

The look on Malcolm McDowell’s face in this final shot is the same one that the everyone did after watching this film. #Caligula

Well, that’s the end of the film. There’s no doubt that this is a terrible film but that being said, it’s definitely something too #Caligula

I hope everyone enjoyed reading this special 50th edition of my Bad Movie Tweet-A-Thon! I just want to thank you to all readers who have been supporting and reading this column. Especially all those who have been with it since the very beginning. No idea how appreciative I am. Again thanks so much and here’s to another 50 more! Now keep a look out in late August for my 51th edition, which I could be doing on one of the following three bad films: MICHAEL JACKSON’S MOONWALKER, NORBIT or TOP DOG. Which one will it be? Vote on the poll which will be posted on SuperMarcey.com soon!