Hey everyone! Welcome to the 48th edition of my Bad Movie Tweet-A-Thon series. If you remember last week, I decided for this edition of the series that I wasn’t going to you guys decide which bad film I was going to watch. Why was that you ask? ‘Cause this month actually marked the 4th anniversary of my Bad Movie Tweet-A-Thon column. So I thought that to celebrate this special occasion, instead of asking you readers to pick which bad film I should watch and live-tweet, I would instead pick the film myself. So which bad film have I chosen for the 48th/4th anniversary edition of the article? I’m going to be doing it on Aussie director Alex Proyas’s Egyptian themed fantasy film GODS OF EGYPT! Is this one of the most insane Hollywood produced Australian films of all time? Who’s idea was it to cast Gerard Butler as an Egyptian God? Read on and find out! Enjoy!

I know I’ve said this many times before but I’m going to say it again: is it too late for me to *not* watch this film? #GodsOfEgypt

Oh, Summer Entertainment. Just when I thought you couldn’t make a film more insane than BREAKING DAWN: PART 2, you make this. #GodsOfEgypt

Oh, Alex Proyas. You go from making THE CROW and DARK CITY to making this film. #GodsOfEgypt

Yep, when I think of what Egyptians looked like thousands of years ago, I totally think of them looking like white people. #GodsOfEgypt

I know this sounds immature but I’m going to giggling a lot every time I hear the name Horus. #GodsOfEgypt

On second thought, don’t answer that. There’s a lot of questions in life that I don’t need to know the answer to. #GodsOfEgypt

So… All the roles that non-white actors play in this film are as… servants? Okay…. #GodsOfEgypt

Hello Elodie Young… *re-ow*. I can see why Horus is crazy in love with her. #GodsOfEgypt

Remember Horus. Don’t mess with Hathor. If she can kick Daredevil’s arse, she can totally kick yours too. #GodsOfEgypt

It’s weird how I have seen more Aussie actors in the first few minutes of this film than I have in most recent Aussie films. #GodsOfEgypt

OMG! Bryan Brown, the most Aussie Australian actor of all time, is playing the Egyptian god Osiris. This absolutely hilarious! #GodsOfEgypt

I don’t know who’s idea it was to cast Gerard Butler as Nikolaj Coster-Waldau character’s uncle, but it’s weird. #GodsOfEgypt

Speaking of which, casting Butler and Bryan Brown as brothers is even more bizarre. They have completely different accents! #GodsOfEgypt

Oh, no! Set just murdered his brother Osiris! This is some GAME OF THRONES style betrayals going on in this film. #GodsOfEgypt

I like how Horus and Set basically turn into Egyptian God versions of Iron Man when they do battle with each other. #GodsOfEgypt

Set just gouged out Horus’s eyes. It’s a good thing the Gods bleed gold ’cause this film have been rated R due to the blood. #GodsOfEgypt

Rufus Sewell has just showed up. I wonder which type of character he’s playing: a villain or the guy who’s girlfriend decides to leave after falling in love with someone else? #GodsOfEgypt

Seriously those are the only two type of roles that he has ever played though out his career. Especially the latter. #GodsOfEgypt

Say what you will about Gerard Butler, you have to admire that he’s not afraid to give 100% when he stars in films like this. #GodsOfEgypt

Oh, geez, Rufus. Don’t walk in on Gerard and Elodie while they’re having sex. You perv! #GodsOfEgypt

Oh, Set. Stop showing off your giant size package to Rusfus Sewell. You don’t have to show him ‘casue you’re a God! #GodsOfEgypt

Well, what do you know. I didn’t realise that ancient Egyptians invented Parkour. #GodsOfEgypt

Uh, oh. Alex Proyas is channelling the INDIANA JONES films with this scene of Bek in the pyramid. #GodsOfEgypt

Now I’m not a doctor by any means but I’m pretty sure Bek would have broken a few bones when he landed on that mountain of treasure. #GodsOfEgypt

Oh, no! Bek’s girlfriend Zaya betrayed him to Rufus Sewell! There’s way too many betrayals in this film so far. #GodsOfEgypt

Wait… Horus has been hanging in his tomb all this time? No guards or anything? You could have left at anytime? WTF! #GodsOfEgypt

I know that Horus is depressed that Set stole his eyes but that’s no reason to stay around at his tomb. #GodsOfEgypt

Oh, geez Horus. Why don’t you pick on someone your own size you jerk. #GodsOfEgypt

I wonder if Gerard Butler is confused which film he is right now ’cause it seems like he’s channelling his role in 300 here. #GodsOfEgypt

Geez, there’s a lot of exposition in this film. #GodsOfEgypt

“I can’t fly without my other eye” 5 seconds later, he starts flying. #GodsOfEgypt

Oh, no. This Earth is flat in this film. If flat Earth believers ever see this film, they might think it’s a documentary. #GodsOfEgypt

Forget CITIZEN KANE and THE GODFATHER, this is now THE greatest film in the history of all human existence. #GodsOfEgypt

What the hell type of helmet is Set wearing in too if his head? It looks like a thumb! #GodsOfEgypt

OMG Set’s carriage is being flown around by giant beetles. This film keeps getting more hilarious and amazing at the same time. #GodsOfEgypt

Is Gerard Butler channelling Donald Trump in his performance as Set? It sure seems like it. #GodsOfEgypt

Hold on second. Set’s main henchman are Minotaurs? I thought they were from Greek mythology?! This film doesn’t make any sense. #GodsOfEgypt 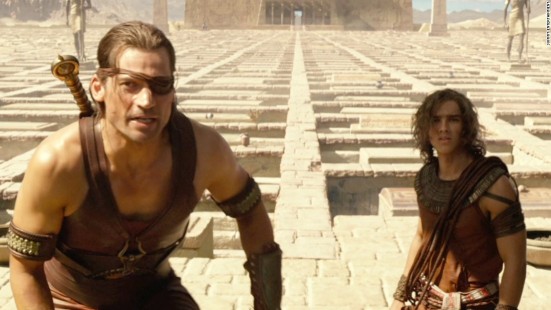 You know for someone who’s suppose to be weak with one eye, Horus is kicking a lot of arse right about now. #GodsOfEgypt

Yeah no matter how hard this film tries, it can’t convince me that Set & Horus are meant to be Uncle and Nephew. #GodsOfEgypt

Set just decapitated his lead Minotaur solider. Good thing that everyone’s blood is gold or we wouldn’t be able to see that. #GodsOfEgypt

Gerard Butler is having way too much fun in this film. #GodsOfEgypt

Oh, man. That shot of Set screaming at the top of his lungs was unintentionally hilarious! #GodsOfEgypt

Yeah, Hathor has arrived to save the day. She’s going to go all Elektra on their arse. #GodsOfEgypt

I don’t know about anyone else but I have feeling that most of the film’s budget went to the green screen. #GodsOfEgypt

I like how our heroes are walking through are very windy desert but yet they’re not even shielding their eyes from the all dust. #GodsOfEgypt

Bousman reminds me of Michael Sheen in the TWILIGHT films. He knows exactly what type of film he is in and he’s hammy it up. #GodsOfEgypt

2 of the 5 Wives from MAD MAX: FURY ROAD are in this film. They’ve gone from one great Aussie film to a not so good Aussie film #GodsOfEgypt

Geez. You’re such a dick, Anubis. You ruined Bek’s chance to talk with Zaya before she heads off the Land of the Dead. #GodsOfEgypt

It’s amazing that in this scene that’s overloaded with so much bad CGI, Brendan Thwaite’s performance is the most fake looking #GodsOfEgypt 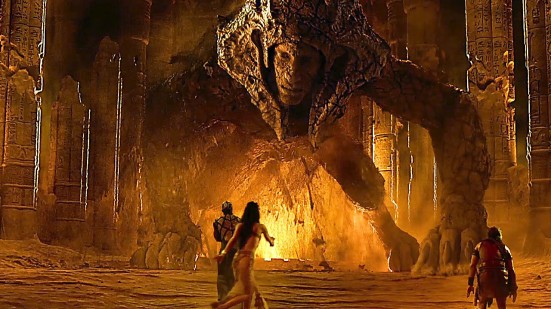 Of course since this film is set in a mythological Egypt, we have to scene with the Sphinx. It’s written law. #GodsOfEgypt

Really? That was it? That answered the Sphinx’s riddle and move on ahead. That’s a bit anticlimactic. #GodsOfEgypt

Set has shown up and has literally ripped Thoth’s brain out of his skull. Seriously, no joke. This meant to be PG-13, right? #GodsOfEgypt

No!!! Hathor sacrificed herself so help Bek & Zaya can see each other! Damn you Anubis! #GodsOfEgypt

Hey Bruce Spence! You can’t have an Aussie made Hollywood blockbuster without him being in it too. It’s pretty much an law. #GodsOfEgypt

Wait… Set has taken parts from other Gods so he can turn himself into a Mecha God?! He’s particularly a serial killer! #GodsOfEgypt

I don’t know about anyone else but the real star of this film is Geoffrey Rush’s long grey pony tail. #GodsOfEgypt

So if Ra is protecting the Earth from a giant space worm, that can only mean one thing: the Egyptian Gods were in fact aliens. #GodsOfEgypt

Well, it’s nice to see the giant world from DUNE is getting work. #GodsOfEgypt

Hmm… I wonder how Rufus Sewell feels about being in both the best and worst film that Alex Proyas has ever made? #GodsOfEgypt

You know I want to see Gerard Butler play more bad guys in films. He’s always seem to be having a lot of fun when he plays them #GodsOfEgypt

Here we go! Horus and Set are turning back into their versions of Iron Man again. #GodsOfEgypt

I’ll say this about this film: as dumb, silly and over-the-top as it is, it definitely doesn’t take itself seriously at all. #GodsOfEgypt

Spoiler alert: this fight sequence between Horus and Set is entirely CGI. Not a single real thing in sight. #GodsOfEgypt

Yeah, I don’t think stealing all those parts from the other Gods really worked out for you, Set. You still got your arse kicked #GodsOfEgypt

Wait… Horus never needed his other eye so he turn into a robot eagle all this time?! This journey was all for nothing! #GodsOfEgypt

Oh, no. Bek is dead. No, wait. He’s alive again. So is Zaya. I think Elvis might be alive as well. #GodsOfEgypt

Not only that, all the other Gods are all alive again. Horus’s parents. They’re totally dead. Sucks to be them. #GodsOfEgypt

Nice to see that Thoth is back to his normal self having his brain ripped out of his skull. #GodsOfEgypt 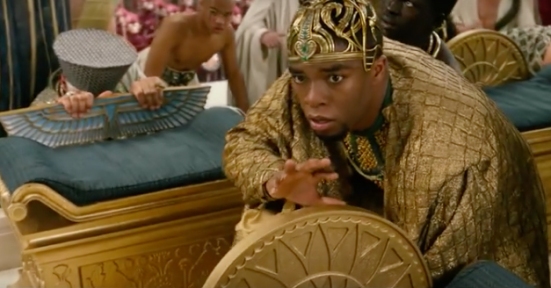 I like how Horus has basically the exact same story arc as Emperor Kuzco in THE EMPEROR’S NEW GROOVE in this film. #GodsOfEgypt

You know if this film came out in the ’80s, I can see it being a cult classic for sure. Especially if it was a Cannon film. #GodsOfEgypt

That’s the end of the film. It’s Proyas’s worst film for sure but that’s being said, it’s hilariously enjoyable as well. #GodsOfEgypt

I hope everyone enjoyed reading this 48th/4th anniversary edition of my Bad Movie Tweet-A-Thon! Keep a look out in late June for my 49th edition, which I could be doing on one of the following three bad films: DRAGONBALL: EVOLUTION, NOTHING BUT TROUBLE and SWEPT AWAY. Which one will it be? Vote on the poll which will be posted on SuperMarcey.com soon!