Hey everyone! Welcome to my 44th edition of my Bad Movie Tweet-A-Thon series and I’m sorry that I didn’t post this online much sooner. The pass few weeks have been pretty busy for me. Anyways it’s 2017 and that means I have another year of even more bad movies to watch. Back in January here on SuperMarcey.com, I said I was going to do a special Bad Films Of 2016 in honour of all the crap that was released in cinemas during 2016. I posted up poll with three bad 2016 movies on it and I said that whichever one out of those three had the highest votes, I would watch and live-tweet for this column. Well, the votes are in and you all have spoken. It was absolutely landslide for one film in particular! For this instalment of Bad Movie Tweet-A-Thon, you guys wanted me to watch and live-tweet… WARCRAFT! Is this story-wise the most confusing video-game-to-film adaptation of all time? Seriously, does anything make any sense? Read on and find out! Enjoy!

I know I’ve said this many times before but I’ll say it again: is too late for me to *not* watch this film? #Warcraft

I should state right off the bat that I have never played any of the WORLD OF WARCRAFT games. So that’s going to tell you a lot about how viewing this film. #Warcraft 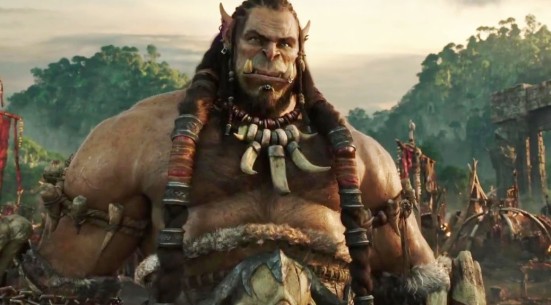 “There has been a war between orcs and humans as long as can be remembered” As far back as the LORD OF THE RINGS trilogy I gathered. #Warcraft

Pretty much if you can’t get Andy Serkis to play a CGI motion capture in your film, you get Toby Kebbell instead. Not a knock against him. Toby is awesome. #Warcraft

5 minutes into this film and I still have no idea what’s going on. #Warcraft

“The fuel of my magic is life” And having a million skulls placed all over your costume probably doesn’t hurt either. #Warcraft 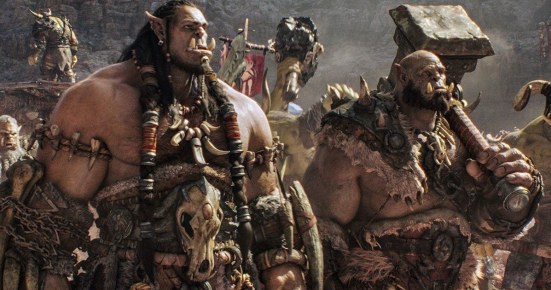 Why do I get the feeling that this film is going to feel like a big long cut-scene from the video game instead of a film? #Warcraft

I think must be checking out the wrong film ’cause I’m watching a scene from THE HOBBIT. Oh, wait… It’s still WARCRAFT. My mistake. #Warcraft

don’t know how they were able to take an hour’s worth of story and fit it in the first 15 minutes but somehow they did. #Warcraft

This film is basically a greatest hits compilation of every fantasy film that has ever existed, isn’t it? #Warcraft

You know I never thought I’d ever hear the phase ‘chop chop’ is a fantasy film but here we are. #Warcraft

I like how Ben Foster’s look in this film makes him look more like a rock-star than an all powerful wizard. #Warcraft

Any minute now the library ghost from GHOSTBUSTERS will come and scare the crap out of this young magician. #Warcraft

20 minutes into this film and as you can guess it, I still have no idea what’s going on. #Warcraft

Seriously, I’m going to be confused by everything that’s happen in this film throughout it’s running time, aren’t I? #Warcraft

OMG! Animal cruelty! That orc just through horse at some soldiers! Somebody call PETA! #Warcraft

You know this film would have been a 100 times better if Ron Perlman had a role in here somewhere. #Warcraft

Nice to see the Direwolves get extra work elsewhere outside of the GAME OF THRONES TV series. #Warcraft

Some of these orcs kind of look what I imagine most Trump supporters look like. OOHHH, SNAP! #Warcraft

All the orcs keep talking about something called the ‘Fel’ but it’s never explained what it is. Just like this whole film in fact. #Warcraft

You know this film would have been great if THE LORD OF THE RINGS, THE HOBBIT and every other fantasy film hadn’t been made. #Warcraft

Why does Lothar’s gun look like it’s made out of plastic? #Warcraft

It’s pretty amazing to me that the orc subplot is actually pretty coherent when compared the human subplot, which is convoluted as f**k. #Warcraft

I will say this though, the CGI of the orcs are really well done and almost AVATAR life-like. #Warcraft

“He wants to lie with me. He’d be injured” So you’re saying that… Orcs like rough sex?! #Warcraft

This camp fire scene is only here just so that we have the main characters talk about their back stories, right? #Warcraft

Seriously, how didn’t the humans not notice Durotan spying on them from the bushes near them? It’s a bit hard not to notice him. #Warcraft

Seriously, why didn’t Peter Jackson sue for some of the designs for the dwarves? The head dwarf looks exactly like Gimli its crazy #Warcraft

How is it possible that the CGI characters give more livelier performances than any of the human characters in this film? #Warcraft

‘What is this?’ Funny that’s the same thing that Ben Foster said after reading the script. #Warcraft

Geez, the Guardian really like it that this young magician Khadgar is helping out. He’s literally chucking a tantrum about it. #Warcraft

Wait, Lothar has a grown up son?! They look more like brothers than father & son! #Warcraft

Wow. The lack of enthusiasm that Dominic Cooper gives with his performance is amazing. #Warcraft

I like how most of the dialogue in this film is mainly grunts. #Warcraft

Wait, did the Guardian just say, ‘Focus, man’?! Yeah, Ben Foster is bringing too many modern touches to this role. #Warcraft

Yeah, the Guardian is like the most useless wizard of all time. #Warcraft

No!!! They killed Lothar’s son! A character who we barely got to know! Nooo!!! #Warcraft

So… When the Guardian runs out of power, he can get it back just by jumping into a magical pool? ‘Kay. #Warcraft

One of the orcs has T-Rex skulls for shoulder pads in his battle armour. That’s kind of awesome. #Warcraft 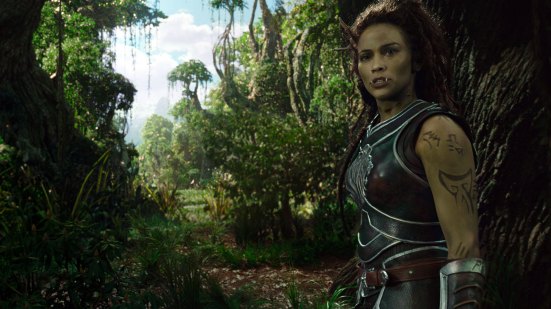 Why is that every time someone pronounces Garona’s name, it sounds like they are saying Carona instead. #Warcraft

Yeah, I swear that Gul’dan might be an addict or something ’cause he keeps taking that human’s essence everything 5 seconds #Warcraft

Over an hour into this film and I STILL have no idea what’s going on. #Warcraft

Ahh… Where on earth is Khadgar now? #Warcraft

Holy crap! I didn’t notice that Toby Kebbell played an non-orc character in this film too. To be fair, he is under lot of makeup. #Warcraft

I like how the character in this film are confused about everything that’s going on as I am. #Warcraft

Well, hello there Glenn Close! Your out-of-nowhere cameo isn’t distracting at all. #Warcraft

I honestly believe that Ben Foster’s character isn’t losing his powers, he’s just falling asleep’ cause of how bored he is. #Warcraft

It’s amazing that the King has a pretty detailed and elaborate model set for organising his battle plans with. #Warcraft

Yeah, it’s pretty much a given that Toby Kebbell is the only legitimately good part of this mess. #Warcraft

Yep, the film is about 80% over and still have so idea what’s going on. #Warcraft

No, not Durotan’s wife! We still needed to develop her character more! #Warcraft

I don’t know why Durotan is wearing wolf skin as a hood. I just don’t know. #Warcraft

Wow! I thought Gul’dan was a feeble old orc but dddaammmnnn…. He’s a bloody muscle-bound beefcake under his clothes. #Warcraft

Holy crap! The Guardian’s demon form looks like one of the members of the band the metal band Lordi #Warcraft

Although I should have expected it since Durotan didn’t really put much of an effort in that fight. What a wuss. #Warcraft

Now the Guardian has brought a Golem to life to defeat our heroes. Yeah, this film is just making things up as goes along. #Warcraft

It’s good thing that those orcs who were still stuck in their old world were battle ready when Gul’dan let them in through the portal. #Warcraft

Okay, I think I’ve finally figured out what the plot to this film is… Ah, nope. I’m confused again. #Warcraft

Whoa! The Guardian has literally become Mega-Guardian with his new demon form. #Warcraft

Holy crap! Gul’dan just through a cage full of people off the side of a cliff! What an arsehole! #Warcraft

Even in defeat, Ben Foster is still lying around and barely even acting. #Warcraft

I swear Dominic Cooper is wearing the exact same battle armour as he did in DRACULA UNTOLD. #Warcraft

Surprisingly the Ben Foster’s character isn’t really dead. He’s just taking a nap over how bored he is of the film. #Warcraft

Wait, the King wants Garona to kill him so she can bring peace between the orcs and humans? THAT IS THE STUPIDEST PLAN EVER!!! #Warcraft

Ahh, Lothar. I know that you came to the rescue but you’re a little bit too late I’m afraid. #Warcraft

Is it just me or does Blackhand look like the evil troll from ERNEST SCARED STUPID? #Warcraft

Well, Garona completely failed her mission. Her killing the King was supposed to bring peace but nope! The war will continue! #Warcraft

I swear the film is not only confusing, it’s full of dumb arses too. #Warcraft

Maybe this plan with the King’s death help bring peace would have work if, I don’t know, he told Lothar about it too! #Warcraft

So from what I gather, Lothar’s son will grow up to the main character in the games? Okay. #Warcraft

You know for a film that’s suppose to be a prequel to the WoW video games, it didn’t really tell that much as a non-fan. #Warcraft

Well, that’s the end of the film. Sorry Duncan Jones but you made of the most boring and confusing video game films ever made. #Warcraft

I hope everyone enjoyed reading this 44th edition of my Bad Movie Tweet-A-Thon! Keep a look out later in February for my 45th edition, which I could be doing on one of the following three bad films: BREAKIN’ 2: ELECTRIC BOOGALOO, FROM JUSTIN TO KELLY and XANADU. Which one will it be? Vote on the poll which will be posted on SuperMarcey.com soon!