Welcome back to our weekly RAW reviews, after a short hiatus I am back! With RAW’s solo PPV only a couple of weeks away this episode was important to set the stage for the event. 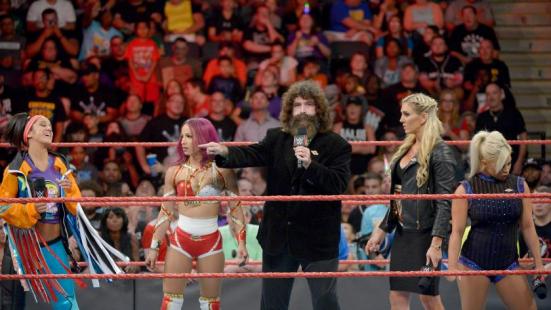 A nice little opening of the show with Foley addressing BACKLASH and of course the new Smackdown Women’s Champion Becky Lynch. This led him to discussion RAW’s own Women’s Division and title situation. He welcomed the champion Charlotte, who came out with Dana Brooke. I quite enjoy Charlotte’s mic work these days, her heel persona is fantastic and her berating of Dana was gold. Of course this led to Sasha coming out, and then eventually Bayley made her way out. So of course, who deserves to have the title shot at CLASH OF CHAMPIONS? Dana opens her mouth with a suggestion and Charlotte isn’t happy. Mick makes the match for up next, Bayley vs. Sasha Banks vs. Dana Brooke. Oh and did I mention Dana Brooke slapped the taste out of Charlotte’s mouth? Decent opening! 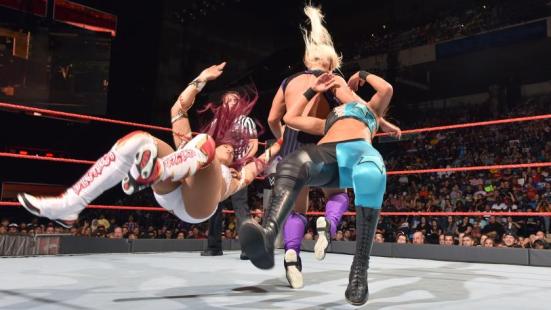 This was a good fun match to get the ball rolling for the show, yes it went through the usual triple threat motions with one being out of the ring so the other two can fight. We also got to see some interesting moves with all three involved, with lots of action in between. Dana is actually looking a lot better in the ring, and she was made to look pretty good by both Bayley and Sasha. I liked that we had a story being told, Dana no longer wanting to be the puppet for Charlotte and taking the opportunity. Sasha and Bayley being friends but the title opportunity is important to them both, so they go for it. They had a strong past and I liked how that played into it as well. Finally it feels like Raw is really building up the division and featuring more than just a couple of women each week. The ending certainly looked botched, it seemed as though Bayley was going to get the pin on Dana. Sasha broke it up and pinned Bayley but from the angle Sasha’s shoulders were down. After the match though the plan seemed to be that Dana was meant to win so the others wouldn’t get the title shot. 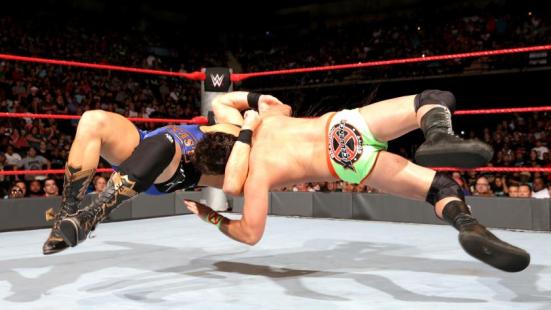 Move over Braun Strowman, Bo Dallas is the next man to take on the “Local Talent” now. It feels strange Bo is getting a push right after he was arrested for public in intoxication. That said I like the refreshed character and the new intensity that Bo is showing. The crowd had me laughing as they chanted for the ‘Jobber’ against Bo. This was a short squash match, and this new push for Bo continues. 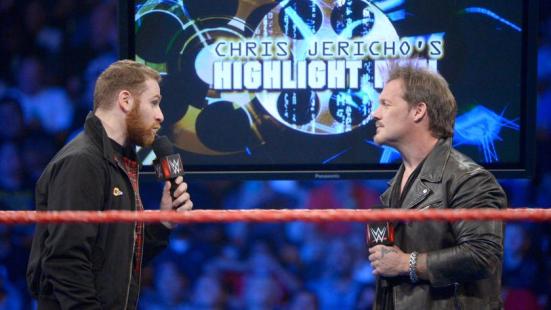 I thought this segment was excellent, backstage earlier Jericho announced his guest would be Sami since his best friend Kevin Owens was canceled by the bosses. This is a brewing feud between Jericho and Zayn and I am definitely all for this, their war of the words was fantastic. I loved everything they both had to say, it all made sense and their chemistry together is on point. Honestly these two could have talked for an hour and I would have been interested and entertained. Can’t wait to see what happens when they eventually clash in the ring! The attack at the end was perfect, it wasn’t a massive one but it made an impact. 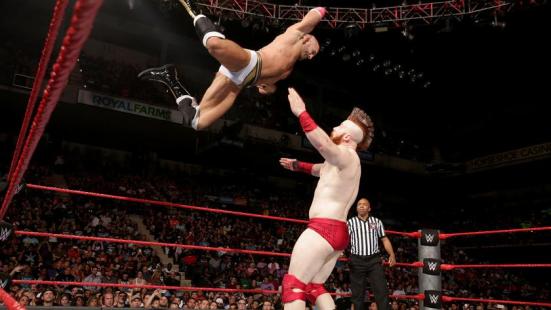 The series sits at 3-1, with Sheamus winning three in a row and injuring Cesaro’s back. Cesaro picked up his first win of the series at a show in England. This match is a must win for Cesaro or the series is over, and Sheamus wins. I’ve actually been enjoying this series for the most part, these two are having unique matches each time and making this series seem very important. I do think both will be better off after this is all said and done, and I am curious to see what happens next. This one was really good, with emphasis on Cesaro not being as powerful due to his hurt back. He couldn’t even do the Big Swing, so great work on selling that. Towards the end Sheamus tried to grab the tights to pin Cesaro, so Cesaro used the ropes as leverage and got the win. Nice bit of storytelling and the series will continue now at 3-2. 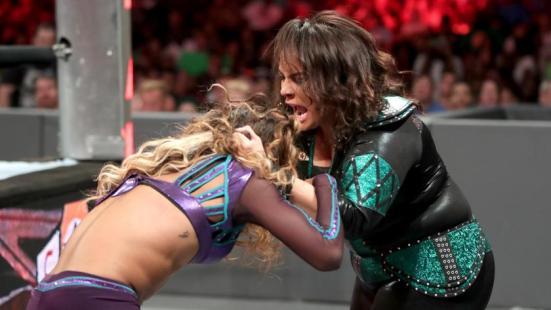 Finally Nia Jax gets a match against someone on the roster, and that turned out to be Alicia Fox after the backstage altercation from last week. I really like Alicia’s new ring attire, it’s nice. Anyway the match really didn’t take off because once they got outside Nia Jax just threw Alicia into the barricade by her hair. It looked really brutal, and that is what it needed to be. She then speared Alicia through the barricade and it all broke down. Nia Jax is looking like a strong monster, even though she is still really green with her moves. Pitting her against Alicia isn’t a bad move.

The New Day vs. The Club 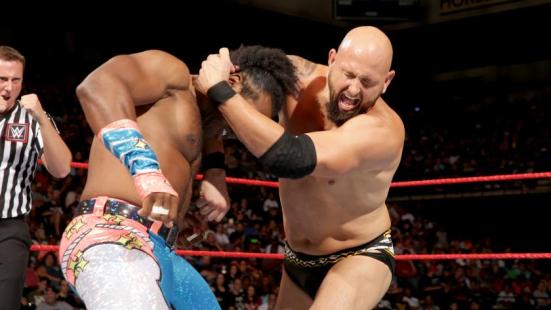 This feud has really run its course, I am finding it a little stale and I wish they were booking Anderson and Gallows better. They need to be monsters, they should be recruiting more members for The Club and taking over. The match itself wasn’t too bad but it wasn’t great either. I feel like we have seen this all before, something needs to be injected into this feud. Even the commentary feels like it is on repeat with this feud. At least the mic work was great from Anderson and Gallows, I enjoyed that for the brief moments. The Club get the win, and have some momentum going towards CLASH OF CHAMPIONS. 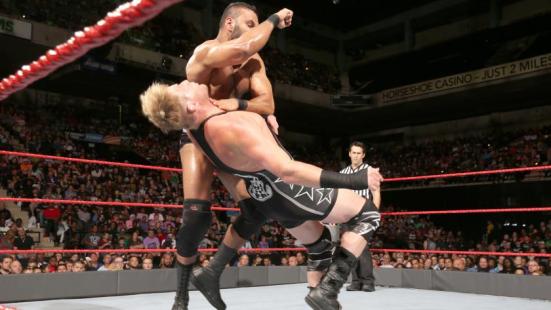 Always feels weird to see Swagger on a main show, he’s just hardly ever around. Jinder Mahal is getting some solid TV time since his return. I have always thought he was rather talented, just needed a good character and direction. There seems to be some of that going towards him now, and he did a good job in this match and picked up the win. Swagger looked off his game and Mahal definitely carried this one through. A filler match but curious to see if they keep this up with Mahal. 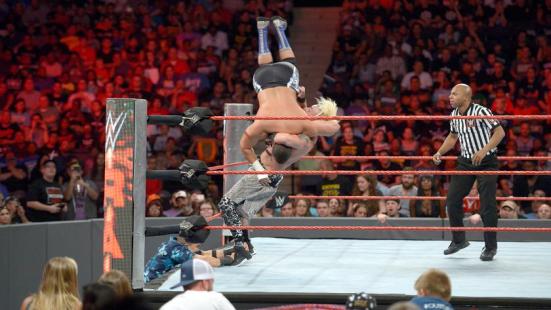 So The Shining Stars are getting a push now? They were seen backstage earlier in the show trying to pimp out time shares or something. They picked up a win last week and the momentum continued as Epico picked up the win this week as well. Interesting they have gone into a feud now with Enzo and Cass, but it makes sense since they are so well over as a team. Big Cass doesn’t seem to be getting another singles push at the moment and it keeps the tag division alive. I have said that RAW’s tag team division hasn’t felt like it is going anywhere so at least I can appreciate the effort. The match itself was alright, nothing too exciting.

Kevin Owens vs. Roman Reigns – If Reigns Wins He Gets Added To The CLASH OF CHAMPIONS Main Event 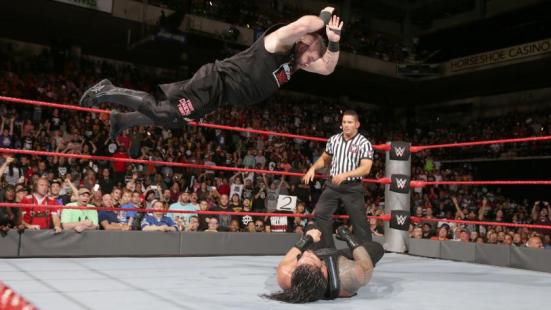 Despite how the fans may feel about Reigns the character, Reigns the wrestler is really fantastic when he is on fire. He was on fire for this main event against Kevin Owens, the pair had a great match and I enjoyed it a lot. The led up to the match was great with lots of backstage segments with both Owens and Seth Rollins, these two are gold as rivals. Lots of good spots in this match, back and forth was solid too. The action goes outside the ring and Rollins comes in and attacks Owens, which causes a DQ and Owens wins. Foley is not happy and he yells at Rollins and restarts the match. After this the pair battled more with lots of insane near falls that had even me wondering who was going to win. For me it doesn’t make sense for the new champion to be pinned, and he wasn’t. Rusev along with his bride Lana show up, causing a distraction for Owens to get the win. After the match Rusev pretty much destroys Reigns, and this feud as I suspected is certainly not over.

Overall a solid RAW, it had some meh parts but some pretty good parts as well. Looking forward to seeing the Cruiserweights light up the show and make it feel worth the three hours. There seems to be more filler now, where as SMACKDOWN seems to use their 2 hours really well and nothing feels like filler. 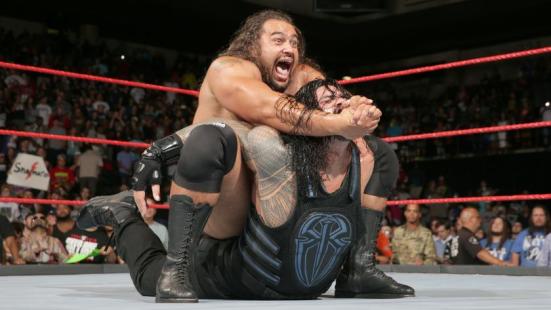