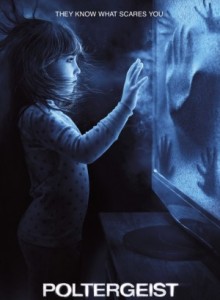 The horror genre is just riddled with remakes and reboots, and while we do get some fairly good films out of it, the majority just do not work. They really seem to be quick cash grabs with no imagination or respect for the source material. The original POLTERGEIST is a much loved film of the genre, it had the right atmosphere and cast to make it a memorable piece. It seemed like only a matter of time before it was remade, there have been many imitators after all. As a film that holds up extremely well, the story did not need to be retold, but since it was, one could hope that perhaps something new would be brought. Sadly this is not the case, this is a lazy retread that made all the wrong moves.

The Bowen family move into a new beautiful house, the father Eric (Sam Rockwell) is unemployed and looking for a new opportunity. Before long strange events start happening around the house with the children Kendra, Griffin and Madison (Saxon Sharbino, Kyle Catlett and Kennedi Clements), nothing quite gets taken too seriously until Madison disappears. With the help of Dr. Brooke Powell (Jane Adams) and Carrigan Burke (Jared Harris) they begin to seek out what took Madison and what is haunting their house.

That synopsis pretty much sounds like the original, nothing much changes here. There are a few little tweaks, like the family finding out that the house was built over a cemetery early on. So we know there is something sinister with the house, and the build up to the scares is lacklustre. The haunting starts quickly and it is not scary, there is no atmosphere at all and before you know it Madison is missing. The parents are so caught up in themselves to really notice what is going on, but their development is minor and it is hard to want to care about them. The script feels very weak on character but also having a proper story, it was like it took the original script and just changed a few things.

What managed to work in the films favour was the younger cast, especially Kennedi Clements as Madison who was full of wonder. While not as good as Heather O’Rourke she certainly made the character her own, and at least she didn’t feel like a direct copy. Kyle Catlett was also very good in the role of middle child, and showed some pretty impressive acting chops. The rest of the cast and characters were not at all very interesting, and considering the talent involved it is very disappointing. 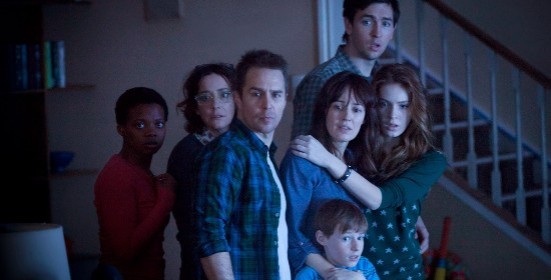 Sam Rockwell who is always very reliable was basically sleep walking through this role, there was no passion for the character or film within him. Rosemarie DeWitt was much the same, she is a great actress with a lot of range but she felt completely bored here. They did not have any chemistry as a couple and their scenes together were very awkward. Jane Adams and Jared Harris who are great actors did not amount to much here and their performances just did not ring true at all. In the original you had Zelda Rubinstein, a woman with so much presence and charisma that she owned every single scene she was in. This film pretty much put her character into two people, and as great as they are it was so poorly written that they could not make it work.

POLTERGEIST 2015 is a very disappointing effort, in what could have been a highly original and scary remake it became a lazy and boring film. When your lead actors have no passion for being in the film, you know it is a lost cause. So much wasted potential here, a clear cash grab remake that really isn’t worth the time.