Due to breaking my foot last week I was unable to review the show but I am back in action and going forward with our weekly NXT shows review!

The show starts off with a recap/promo from last week with Finn Balor addressing his future in NXT, and Shinsuke Nakamura comes out. He proposes that he must fight the icon in order to go after the NXT Title, so we will be getting Balor vs. Nakamura in the near future!

I will never complain about seeing Tye Dillinger in action, but he is now on a losing streak and I am wondering whether this is leading to something. He is over as hell, and I really don’t want to see him go the way of Damien Sandow or Zack Ryder. The man deserves success and he has gotten himself so over, he has everything, make it happen! Not a bad match, Lorcan is pretty fun to watch and there was a natural gel between the two. His finisher was really good, I just hated seeing Tye lose again. I’ll be keeping my eye on where this goes.

Austin Aries is interviewed backstage by Cathy, he addresses his loss at Nakamura at TakeOver, tries not to be too fazed by it. Admits Nakamura was the better man for the 3 seconds it took to pin him but that loss is now fueling him. No Way Jose turns up, to give him encouragement?

Bayley is back in action!

No Way Jose vs. Josh Woods

Pretty much a squash match to showcase No Way Jose, and I really am not feeling him. He has talent in the ring, but the gimmick just feels like recycled material and I don’t feel like he is doing anything to stand out. Josh Woods has a great look but it felt like he was wrestling in his tight boxers, that was a distraction. Post match after No Way Jose got the win, Austin Aries came out and said he’s given him hope. No Way Jose gets Austin to dance, and I was in heaven watching that. I want to go dancing with Austin, in those tight jeans! Austin has some moves, they danced around until they got to the announce table and Austin attacked. I loved that, perfectly executed, and I want to see Austin demolish him.

Finn Balor vs. Shinsuke Nakamura will take place in THREE WEEKS! My fellow Melbourian barges in on Regal and Nakamura and match is made for the two for later. 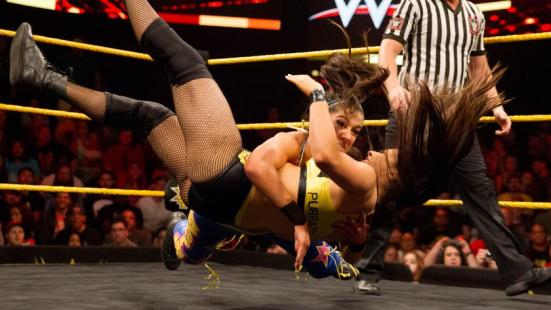 Bayley is back after about a month, and the crowd goes wild! Bayley is amazing, but we all knew that. I actually quite like what I have seen from Deonna and there is potential for her. This wasn’t a Bayley squash match, the two had some good back and forth action. It was a match to showcase Bayley but Deonna got in some good shots and continues to impress. I wonder whether Bayley will get her return match with Asuka at TakeOver or at a future NXT event. Either way I cannot wait for that! I enjoyed this match, even though it was short.

Backstage with Carmella who doesn’t get a chance to talk as Alexa Bliss shows up. They basically argue about who should be the next NXT Women’s Champion. I heart Carmella!

Samoa Joe promo, followed by a recap of Nia Jax vs. Asuka from TakeOver. American Alpha return next week. 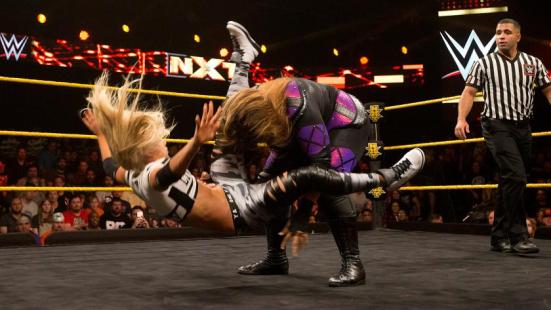 This was pretty much a squash match, I really like Nia Jax and the more matches she has the better. She has a lot to learn but she is learning and getting better. Liv Morgan has potential but she does not really stand out all that much, I think her look is a little too similar to Carmella. Nia gets the quick win, and they definitely have plans for her. As long as she keeps working hard and has matches, Nia can climb to be one of the greats.

Carmella vs. Alexa Bliss is set for next week. 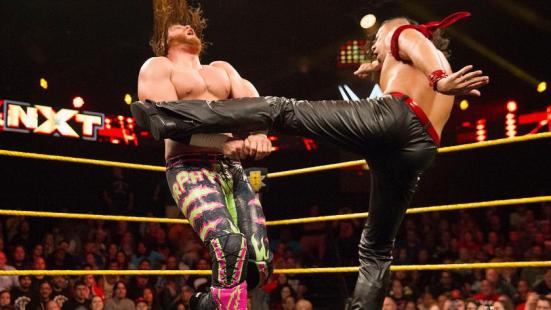 Can we all agree any time we have Nakamura on screen is a good thing? This was a pretty good match despite the time limit on it, Buddy Murphy is extremely talented and I want to see him go places. Having matches with people like Nakamura is a good thing for him, he can learn more and get the exposure he needs. They had some good back and forth action, with Nakamura oozing charisma and showing some great psychology, always nice to see in shorter matches. I liked that this match was used as build up for the future match with Balor but it also was a good chance to give Murphy some singles time.

Overall this episode of NXT was really enjoyable and there was some good future build up, especially with Austin Aries and No Way Joes and of course with Nakamura. I am excited to see where things lead, and look forward to next weeks episode.