I honestly don’t think any NXT TakeOver event has been a disappointment since they first started, each event has always gotten me excited. With a name like The End, this one certainly had me ultra curious, what does it mean by The End? Could this be Finn Balor’s NXT swan song? With a lot on the line, did The End deliver the goods as with each Take Over show?

I am going to go right ahead and say this Tye Dillinger is the most underrated guy in NXT at the moment. He is extremely over with the crowd, he has so much experience and he is damn entertaining. Why does he get looked over so much? I don’t know, but it is a crying shame he hasn’t been on each Take Over show. As for the match itself, I had a feeling Dillinger wasn’t going to get the win, being that it was the NXT debut match for Almas. They guys had some decent back and forth action, some nice spots but ultimately the match was really short and it didn’t get much of a chance to take off. Dillinger deserves a lot better, and I hope that he gets it too. Would hate to see him get forgotten about and be someone they let go of down the track.

These two teams had one hell of a match at the last Take Over event, and the build up for the rematch has been strong. This match did not disappoint and it is the perfect example of what tag team wrestling is all about. If you want to feel inspired by the art of wrestling, watch this match! So many fantastic spots and moments, some great tag team moments and of course some excellent heel work by The Revival. There was a lot of great ring psychology at play with this match, a great story was being told throughout the match and it was entertaining. I was so sure the champions were going to retain the titles, and there were some moments I was questioning that. The Revival proved me wrong by taking out the victory and become the first Two Time NXT Tag Team Champions, and well deserved too as these two are amazing. After the match American Alpha was attacked viciously by two new faces, two new huge guys that are apparently under the guidance of Hall Of Famer Paul Ellering. Looking forward to seeing where this goes!

The Greatest Man That Ever Lived vs. The King Of Strong Style – what’s not to love? This was an amazing match and a potential MOTY candidate, each and every moment was just so damned good. The match felt really even handed with Aries getting the better of Nakamura a few times, and the frustration shown with Nakamura was perfect. These are two guys who know their craft and they know it well, being able to witness this match live felt like something special. I could watch these two perform each and every day against each other, can we please get like 10 rematches or something? I loved how Aries focused on Nakamura’s legs and Nakamura focused on the hurt ribs, again great psychology shown in this match as well. There were some nice close calls and the action even poured outside of the ring, it was pretty intense! It looked like Aries may have had Nakamura’s number but it wasn’t so with Nakamura pulling out the victory, leaving me wanting so much more!

I really wanted to see Asuka vs. Bayley II and perhaps that is being saved for the next event, they did have a nice handshake backstage though. Nia Jax is a really powerful woman, but she still needs a lot of work in the ring, and unfortunately up against the likes of Asuka it is obvious. That said this was not a bad match, it was at a completely different pace and using different tactics. It made sense as Nia Jax is a strong woman, unlike anyone Asuka has gone up against. It wouldn’t have made sense to be a fast paced match, Jax needed to showcase her power (which she did a bit here) and Asuka needed to pull out all sorts of moves (which she did here). I wanted to see Jax just completely go crazy on Asuka but it was like she was holding back a bit. The ring chemistry wasn’t really there either, as much as they both tried. Asuka managed to overcome the odds and the kicks delivered to Jax looked brutal. Asuka is possibly one of the best women wrestlers in the world, I don’t think she could look bad if she tried. 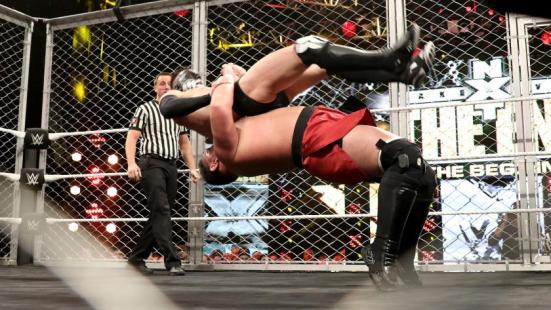 Once again I absolutely loved Finn’s entrance, it was a great spectacle and I enjoyed it. Joe just looks like such a badass when he makes his entrance, I love it. The Steel Cage stipulation for the NXT Title has not been done before and for a first these guys delivered a pretty great match. They have a lot of chemistry together, whether it be as a team or as opponents, there is a reason these two have been the main focus for months in NXT. I really liked that the Steel Cage got used as a weapon and both of them at one point felt the pain of hitting the cage. These two hit some pretty awesome spots, and I liked that they both kicked out of each others finishers. There weren’t a lot of near falls so when the finishers got hit and they kicked out it was pretty intense viewing. I truly believe these two wanted to put on a cage match that wasn’t like we have seen before, and it certainly did feel different. It left me wondering what would happen next and what else they could possibly do. The end came with a Muscle Buster from the second rope, which looked brutal. Finn did not get up when the show went off, which leaves me wondering whether this was truly his last match in NXT. The time feels right for Finn to be called up to the Main Roster, and The Club is there waiting for his arrival.

Overall this was a great show that delivered the goods, and we even saw Bobby Roode backstage and it looked like Mr. William Regal was going to go talk with him. I expect we will get an announcement of his signing soon and a reveal of who this new team is. Highly recommended viewing!