NXT is back with another live WWE Network special with NXT TakeOver: Respect, easily an event I anticipate a lot more than Monday Night Raw at this stage. So far with all of their TakeOver specials, NXT has delivered and then some. Not only do these events live up to the hype, they exceed those expectations.

Respect however is very different from the previous special, not only did the event have the first ever Women’s Ironman Match, but the women would be main eventing the show! This is a huge deal, as NXT always showcases its women but on the main roster creative seems to be struggling in booking a successful ‘Divas Revolution’. NXT hasn’t even tried and they have a Women’s Revolution, and they are always must watch matches. 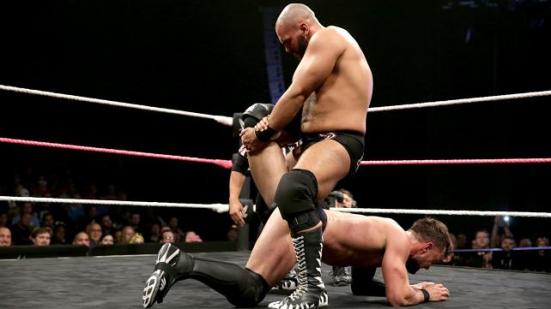 As to be expected the show opened with a Semi Final for the Dusty Rhodes Tag Team Classic, and right off the bat I am glad the semi’s and final were done on this event. It made these matches so much more special and a great tribute to Dusty, who you just know would have absolutely have loved all of this. On to the match, I didn’t expect this one to open the show but I’ll never complain about seeing the amazing Finn Bálor up first.

This was a great opening match, where in Dash and Dawson got the upper hand when Finn tweeked his knee. This became the focus of the match as they worked hard to get the NXT Champion down. There were some really great spots in this match, and it was suspenseful because whenever Finn tried to take a risk you knew it was at risk of injuring that knee. The finish was intense and I thought for sure something was going to happen, however Finn and Joe pulled off a victory. With them competing in a second match, it left the question open for “would Finn be 100%?”.

A nicely booked match, and it really just showcased the talents of all four men. Finn especially is a star, he deserves to be NXT champion and he will go a long way. 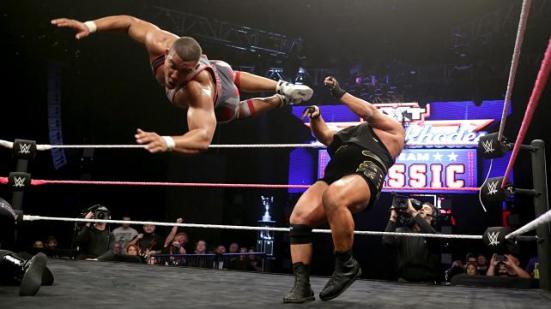 Next match up is the other Semi Final, and this was also an excellent match. Rhyno has been a welcome addition to NXT and he has been doing his job. He’s working great with the new guys and definitely helping them along the way, veteran knowledge goes a long way in this business. Baron Corbin has benefited from teaming with Rhyno and it certainly showed in this match. Not to say that Jordan and Gable weren’t fantastic, because they really were! Keep these two as a tag team I say, they really showed so much heart and they looked like a million dollars.

The NXT crowd were very much rooting for Jordan and Gable, with Corbin getting a lot of heat. The back and forth action was great, and while I had my suspicious of who would get the victory, I kept second guessing myself throughout the match. There were some amazing spots, and it was pretty cool to see Gable actually lift Corbin, who just looked so huge next to him. The match ended when Corbin hit a perfect End Of Days, and the final for the Dusty Rhodes classic was set. 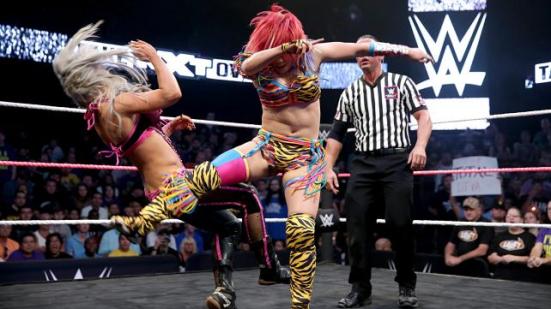 This was easily one match I was anticipating, mostly because it was the NXT debut match for Asuka (formally Kana). Now this woman is one of the greatest women’s wrestling working in the world today. Her signing with NXT is a huge deal and a big step in the right direction as well. Now I wasn’t entirely sure having Asuka against Dana Brooke would be very good, because lets face it Dana is still very green even though she is clearly working hard. But I can see why they did it, Dana is very over as a heel and I think they will save Asuka vs. Emma.

Right off the bat the crowd were clearly excited for Asuka and they were giving Dana a lot of shit! It was obvious who was going to win this match but it was a thing of pure beauty to see Asuka perform her magic in the ring. She is that great at what she does, Dana hasn’t looked better. This woman made Dana look almost legit, and she knows how to carry and help her opponent. They need to let Asuka do her thing, do not hold her down. She is possibly the best women’s wrestler on the roster, and there is so much potential. I love how this woman has an extremely unique look, she could be a movie star! 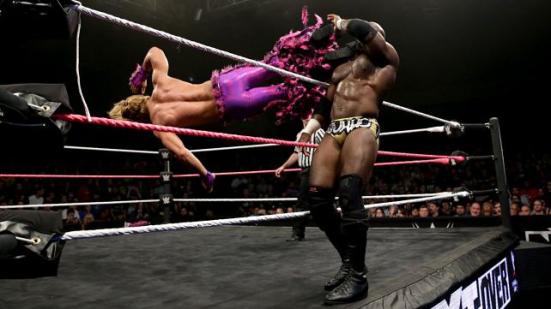 Now this was a surprisingly good match, I actually expected it to be shorter, I am really happy they gave this one some time. These two told a story and both men looked fantastic. With the quality of the match, it really didn’t matter who got the victory because it definitely elevated both men. I am always happy to have Tyler Breeze on the card, not only is he extremely pretty with those Hollywood good looks but he is an outstanding competitor. Could Tyler Breeze be the next break out star of the WWE and actually get into films? I sure hope so, he would be a natural Apollo Crews is a talent that must be seen too, his debut in Brooklyn was a lot of fun and this extended that to showcase more of his talent.

This match really could have gone any way, with some close calls and some hard hits. The crowd really didn’t know who they wanted to go for, instead of picking sides we just got to enjoy a great match. Heck I would have loved this to have gone on even longer and I hope this develops into a feud or that they do have more matches together. 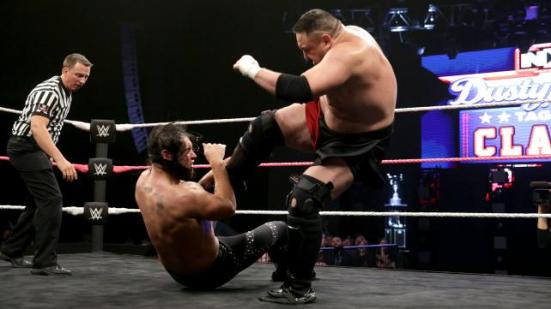 Time for the final and honestly I can’t complain about who is in it, even though they aren’t really tag teams. Naturally Finn’s hurt knee plays a huge part in this match. Showing the kind of man he is Finn even starts the match, but of course the knee gets the better of him. There was a lot of excellent back and forth action, each man showing so much heart. They made this match feel like it was for an incredible prize, they really made this feel special. And Dusty Rhodes deserves nothing less than that!

I had a lot of fun watching this, unable to actually predict what would happen next or who would end up winning. It was just such an intense match, although when it was time for the end I did see that coming. Winning with how they won earlier, Joe and Finn did their finishers with Finn getting the pin. No doubt having Finn and Joe winning such a huge prize as a team, will lead to a huge feud for the NXT title down the line. 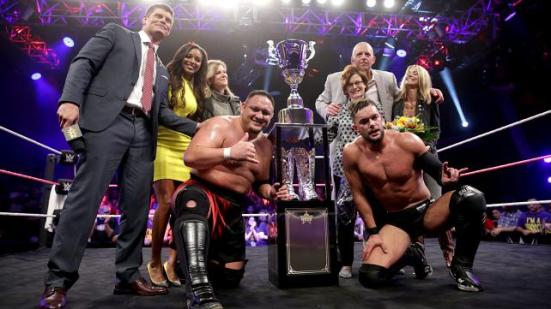 Post match celebration with the Rhodes family was absolutely beautiful, an amazing tribute to Dusty. I did tear up, it was just so well done, it was amazing! 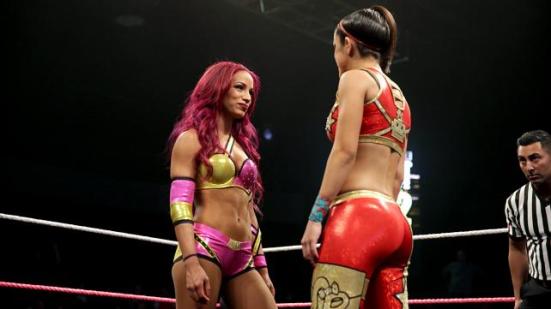 How does one even being to write about this match? WHAT AN INCREDIBLE MATCH!

This match as it stands now is my 2015 WWE/NXT MATCH OF THE YEAR! These two women are incredible and this folks this is wrestling! Not just women’s wrestling but wrestling in general. This is how you tell a story in the ring between two people, their previous match was outstanding and this match managed to out do that, I didn’t know it was possible to out do perfection. There was so much to say in this match, Sasha with her attitude and Bayley needing to shed some of her nice girl ways in order to get to Sasha’s level and fight back.

I wasn’t expecting many decisions but we had 5 in total, with the match tied 2-2 until the dying seconds. This match got brutal, and it doesn’t matter how many times we see someone get thrown into something, it can still be shocking. There was real purpose behind Sasha smashed Bayley outside the ring, especially into the front tron which saw Bayley’s biggest fan at ringside start to cry. REAL RAW EMOTIONAL PEOPLE! Bayley used the ring steps in a really cool way, and again it felt fresh and it felt like it had meaning.

This match had better storytelling than most of what I have seen from Raw this year, it was that good and that well handled. These two deserved to be in the main event and I hope this match and this entire event makes the Raw creative (and Vince) look up and realise how much potential they have that is getting wasted.

I LOVE THIS MATCH SO MUCH! Thank you Sasha and Bayley for tearing down the house and being inspiring to the WWE fans. 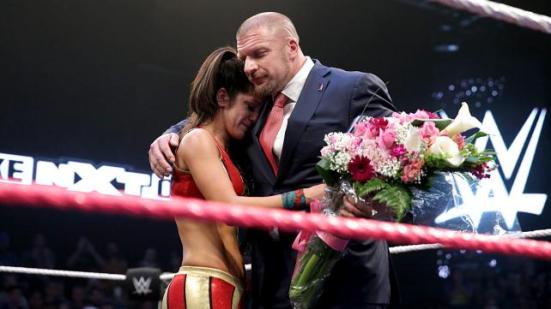 All pictures are credited to WWE.com