The Show: Season 2 of Transformers Animated kicks off with a bang as the AUTOBOTS, lead by OPTIMUS PRIME (David Kaye) help to protect the city of Detroit in the wake of the DECEPTICON attack that saw MEGATRON (Corey Burton) disappear along with Prof. Sumdac (Tom Kenny) as his captor. Further complications arrives for PRIME and his small band of AUTOBOTS with the arrival of AUTOBOT SUPREME COMANDER ULTRA MAGNUS (Jeff Bennett) and the CYBERTRON ELITE GUARD.

Not since season 2 of Beast Wars has there been a follow up season to any TRANSFORMERS franchise as exciting as this one. New characters and a strong focus on character and story development helps make this series stand far above more resent TRANSFORMERS series which have really struggled when it comes to introducing new characters and addressing the big issue that seems to plague every TRANSFORMERS series, which is the human characters. It is also the only other series besides Beast Wars to keep a strong connection to the original G1 cartoons, be that via the return of familiar faces and voices, or other easter eggs, gags and quotes that many older fans will pick up on.

What is really enjoyable about this season is that new characters are introduced within the very first episode, ULTRA MAGNUS, SENTINAL PRIME (Townsend Coleman) and JAZZ (Phil LaMarr) arrive to help bring back OPTIMUS and his group back to CYBERTRON. However PRIME tries his best to help convince his leader, as well as a very stubborn and full of himself SENTINAL PRIME (who fans will love to hate) that Earth still holds a very strong threat from DECEPTICON attacks as OPTIMUS knows that MEGATRON is still put there. The conflict between OPTIMUS and SENTINAL is something that we briefly saw in the first season is played out beautifully as SENTINAL is proved not only wrong regarding the DECEPTICONS but also that his strict by the rules and cocky attitude have no place in the field and further proves that OPTIMUS is not only a better warrior but also the superior leader. 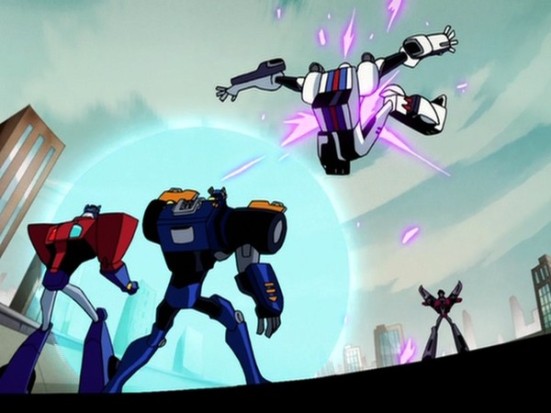 As for the DECEPTICONS they are front and centre throughout the entire season as they also have a few new troops join their ranks including the two CONSTRUCTICONS, MIXMASTER and SCRAPPER (whose creation is pure hilarity) side with MEGATRON. Another new face is fan favourite SWINDLE (Fred Willard) and the return of bounty hunter LOCKDOWN (Lance Henriksen) who returns for one of the seasons best episodes, A Fistful of Energon, which plays out

as a Spaghetti Western. Although the greatest DECEPTICON moment of the season belongs yet again to STARSCREAM (Tom Kenny), who in his never ending quest to destroy MEGATRON creates a collection of clones who each represent an aspect if his personality; SKYWARP (the coward), SUNSTORM (the suck-up), THUNDERCRACKER (the egomaniac), RAMJET (the lair) and SLIPSTREAM (a female STARSCREAM, that raises more questions than answers).

Every episode are simply fantastic, fans new and old will be enthralled by the action and strong character development and story structure. No episode feels like a filter episode and contains an abundance of G1 and Beast Wars references that includes an appearance of WRECK-GAR (“Weird Al” Yankovic) and a character named WASP (Tom Kenny) who has a strong resemblance to fan favourite, WASPINATOR. But the fun doesn’t stop there as older Bots such as BLURR and SHOCKWAVE return and both are voiced by their original G1 actors, John Moschitta and Corey Burton. Unlike most TRANSFORMERS series this one has very few flaws, which is refreashing but this is mostly in regards to the human characters of Sari Sumdac (Tara Strong) her father the Professor and others, including Meltdown (Peter Stormare) as they are neither annoying and actually contribute to the plot. The seasons final episode even ends on a cliffhanging reveal about Sari’s origins.

Transformers Animated Season 2 is a fantastic series to add to your TRANSFORMERS collection. It has an excellent blend of action, comedy and enough references to the original cartoons to please both old and new fans.

The Australian DVD
The picture and audio are of excellent quality, there isn’t anything to fault with this transfer.

Bonus features for this season includes two animated shorts that focus on the DECEPTICONS as well as two audio commentaries and trailers for other TRANSFORMERS series and a character gallery which provides a bio on selected characters.