The Film:
Keanu Reeves has always been an interesting actor to watch on screen, having appeared in almost eighty films that have ranged from Hollywood blockbusters, low key actioners, indie and the occasional romantic comedy. Although following the success of The Matrix films Reeves almost disappeared from the silver screen only showing up in low key films that didn’t particularly reach the same success that many were expecting. The last two years has seen Reeves take a rather unique turn in his career which began with his directorial debut, Man of Tai Chi, the samurai flop 47 Ronin and the surprise hit John Wick.

Following the death of his wife (Bridget Moynahan), John Wick (Keanu Reeves) a retired hit man is left one final gift from his late wife with a dog to help ease his pain. Wick becomes very close to this dog and it isn’t long before his life is again turned upside as a trio of gangsters, led by Iosef Tarasov (a repulsive Alfie Allen), son of local Russian gangster Viggo Tarasov (Michael Nyquist) break into his house, steal his car and kill his dog. This set off a chain of events that sees Wick re-enter a world that he left behind to kill the man that took the last thing that had any meaning to him.

John Wick took audiences by surprise upon its release late last year, as it quickly became known as the film were Keanu Reeves seeks revenge upon the gangsters that killed his dog. But John Wick is more than that as it isn’t simply a straight revenge film, but rather an interesting exploration at the world of contract killers. It plays out like a dark fairytale with Reeves’ John Wick as the boogie man, or as he is referenced throughout the film, Baba-Yaga. Upon hearing his name, every character stops in their tracks, they know that his is not someone to mess with.

John Wick was co-directed by Chad Stahelski (Reeves’ stunt double on The Matrix) and David Leitch (who remains uncredited) and they do a great job, particularly with the action sequences which are well executed, the best being the club scene. The film feels more like a samurai film from the 1960’s, as John Wick is basically a one man army who easily dispatches the countless henchmen that are sent after him. One of the other more exciting aspects of the film is that it explores the secret world of hit men and women. There are clubs, hotels and “laundry services”, and even a strict set of rules that must be followed whilst within this world, which also keeps up the samurai feel to the film.

The film boasts excellent appearances from Willem Dafoe, John Leguizamo, Lance Reddick and Ian McShane. Fans of the film will rejoice at the news that John Wick will return in a sequel that was recently announced. 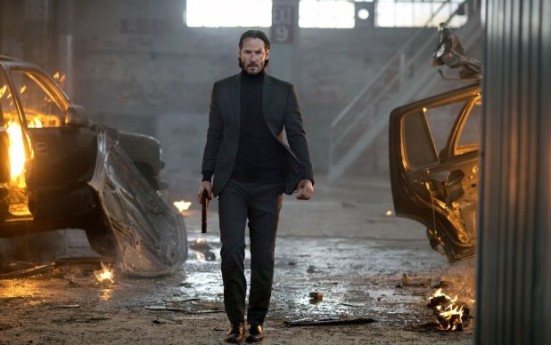 The Australian Blu-ray
The copy reviewed was a screener, so I am unable to comment on the final verdict for the video and audio quality. However on the screener video and audio were of good quality.

Extras
Audio Commentary: Provided by cast and crew, well worth a listen.

Don’t F*ck with John Wick: Provides an in depth look into the creation of the stunts and work that went into creatiing the films key action sequences. The films director, writer, stars and the entire stunt team talk about how the stunts work within this world that John Wick and his associates live in.

Call in the Cavalry: Looks into the origins of how the film has developed from the original script that was handed to Keanu Reeves who passed it onto Chad Stahelski (who had previously worked of Reeves directorial effort Man of Tai Chi) who was originally sought to help create the stunts for the film but soon became draw to directing the film. Focuses on the filmmakers process about bring the story and the characters to the screen. This includes interviews with cast and crew as well as a look at the tables reads and a descent amount of behind the scenes footage. It also focuses on the casting process and how they selected the right people for the main cast.

Destiny of a Collective: Takes a look into the careers of the films two directors Chad Stahelski and David Leitch and how they formed their stunt company and their background in creating the stunts and action sequences for a variety of other films and as second unit directors and how they formed a close friendship with Keanu Reeves and how they became involved in making their debut with John Wick. The cast and crew reflect in their experience working with first time directors and how their previous background within the industry has helped them to better understand the story telling process.

Thanks to Roadshow for their support.