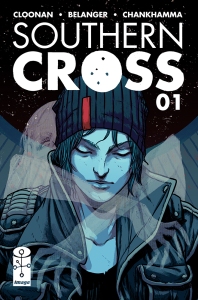 Review: Becky Cloonan is best known within the comic community as an artist, her most notable work being American Virgin and Demo both published under VERTIGO comics as well as artwork and covers for different series from MARVEL, DARK HORSE and Image. Cloonan has made the jump into the writers chair with Southern Cross, a new ongoing series published by IMAGE, the story follows Alex Braith as she journeys to Titan to collect her remains and to find out what exactly happened. Alex boards the tanker/personal carrier, the Southern Cross to find some answers regarding her sisters death.

Southern Cross is tipped to be one of 2015’s best new comic series and the first issue proves this statement to be correct, Cloonan’s script plays out like a classic mystery and weird fiction. The design of this future world is in tune with that of classic 1980’s sci-fi films such as Blade Runner and Outland. The art, by Andy Belanger (IDW’s Kill Shakespeare) is amazing and has a similar look to the works of French comic book artists Jean Giraud and Jean-Claude Mézières, whose work inspired the look of Luc Besson’s The Fifth Element.

The first issue is a great starting point for long time fans of Cloonan, and first time readers as IMAGE is the driving force for creator owned comic series and Southern Cross is another fine example of the original stories that the publishing brand has continuously produced over the past 20yrs. Issue one doesn’t really offer much of an insight to where this series story will be heading, but this is a going to be a series that reveals vital information as the series moves along. This is a real character piece, and you get to really know Alex Braith’s character with only a few pieces of naration as well as her interaction with the vessels other inhabitants, including her room mate and the captain and first mate of the Southern Cross.

Readers are also treated to a few bonus pages at the end of the issue that include a layout of the Port Authority and the Southern Cross, as well as Alex’s profile with some character sketches of some of Alex and some of the characters introduced in the issue. Cloonan also created the issue, and all future issues covers and her artwork continues to shines as it always has.

Southern Cross is definitely a series to keep your eye on, I’m already eagerly awaiting the second issue which will hit shelves next month.