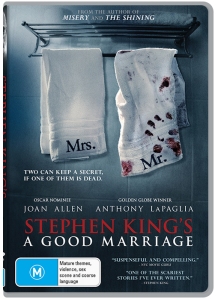 The Film:
Stephen King’s A Good Marriage is not the traditional piece one might expect from the master of horror, in fact this is not a horror. Based on his short story and screenplay by King too, this is a drama thriller, without any supernatural elements. Perhaps with having King’s name so prominent people may get the wrong idea about this film, it really is very unlike King, at least the King we see on film.

Our film introduces us to the perfect couple, married for 25 years Bob (Anthony LaPaglia) and Darcy (Joan Allen). They are successful and have two grown kids, things look and feel great. However when Bob needs to go away, by accident Darcy finds out her husband has been harbouring a big secret – he is the Beadie serial killer.

Now the start of the film, well when Darcy finds out about Bob, it does not feel realistic. Apparently we are supposed to believe that after all these years Darcy has never stumbled across Bob’s secret, it isn’t very well hidden (driver’s licenses of his victims are just in a little box). She finds this while searching for batteries, so that in itself is asking a lot of the audience. That aside however, it is a shocking secret to discover, and her reaction was rather perfect. Darcy is shocked and she starts having strange visions about what she has found out. 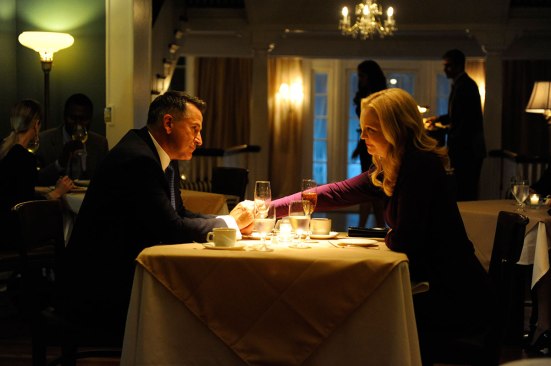 The film then focuses on how will she deal with this, and how will Bob deal with her finding out. It is a juicy premise, and from watching and reading a lot of true crime cases, spouses have been blind to what their partner has done. It raises those questions ‘how well do you know your partner or loved one?’ and ‘do you really want to know everything?’. If your partner was doing these horrible things, would you ever want to know? You could use his secret to mean anything metaphorically as well, which is what makes this work. It could have easily have been about an affair, or something like that

The real strong part of the film is the performances, Joan Allen and Anthony LaPaglia are great here. The pair share a strong chemistry as a couple, so the secret does tear that down a bit. Joan Allen plays the unsuspecting wife very well, and her scenes of dealing with the truth come across very well. At the same time Anthoy LaPaglia plays that loving husband on the surface, but he really is chilling as a killer as well. The right people were cast for these roles, and the film is very much worth watching for them. Where it doesn’t quite reach its mark is the suspension of disbelief with the finding out of the secret and the snail pace of the film. It is a slow burn piece, but it could have been paced a little better.

I do understand where Stephen King was coming from with this film, he’s managed to write a fairly decent script and I wouldn’t hesitate to watch another film he has written after this. Things get intriguing with King when he steps away from the horror genre, and this is one of those. It is nicely directed for the most part, and something I am glad to have seen. It might not be a great or a hugely strong film, but it is a very solid effort and a good evenings watch.

The Australian DVD
The DVD I reviewed was a screener, so I am unable to comment on Picture/Audio quality.