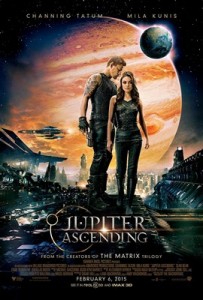 Say what you will about the Lana & Andy Wachowski, but you can’t deny that they are both the most unique blockbuster filmmakers out there at the moment. Ever since their second film THE MATRIX was released in cinemas in 1999 and changed the face of action films forever, they have dedicated to making blockbuster films that not only delivered on a spectacle level, but also tackled some very interesting themes and concepts in them as well. Sure some of them were a bit of a mix-bag, but you got them give them credit for wanting to do more with their films than just make any regular blockbuster that comes of Hollywood these days. So you definitely can say that I was looking forward to their latest film JUPITER ASCENDING. So how does this film compare to their other ones? Read on and find out!

The film tells the story of Jupiter Jones (Mila Kunis), a young woman who hates her dull miserable experience working as a cleaner for her family’s business. However Jupiter’s life changes forever when one day while she trying to earn some extra money, she gets attacked by a group of alien assassins. Luckily is saved from them by Cain Wise (Channing Tatum), a genetically engineered ex-soldier who was hired to protect her. Jupiter soon finds out that the alien assassins that were trying to kill her were sent by Balem Abrasax (Eddie Redmayne), the ruthless older brother of one of the most powerful alien dynasties in the universe. Balem wants to Jupiter killed because she is key to an inheritance that was denied to him, his younger brother Titus (Douglas Booth) and sister Kalique (Tuppence Middelton) by their late mother: Earth.

There’s actually a lot more to the plot than that, but I decided not to reveal because that would go into spoiler territory. I must admit that I would’ve had this review posted sooner, but I actually needed to see the film again before I could write-up my thoughts on it ’cause I was pretty tired at the screening that night (I had only finished work at my day job a few hours before). As you would expect, my tiredness did have a really negative effect on my viewing of it (I absolutely hated the film on the first watch). I decided to check the film out again, so I can know for certain on how I truly feel about it and see if my reaction would be different. So what do I think of the film? I’m not going lie, JUPITER ASCENDING is a pretty bad film. While I do give the Wachowskis credit for wanting do a sci-fi film whose sole purpose is to be fun, pulpy space opera that’s more in the vein of STAR WARS (especially since that this is their first entirely original film they’ve made since THE MATRIX trilogy), but unfortunately this film just doesn’t work at all. I believe that all the film’s problems lie with the Wachowski’s script, which is a complete utter mess. The plot is both incoherent and doesn’t make any sense at all, the tone is uneven and all over the place, it’s full of clichés, the dialogue is nothing but goofy exposition, the humour fell flat and there were scenes were just so cringe-worthy that I honestly couldn’t believe the actors did them with a straight face. Plus when it came to the characters, the script didn’t do the talented cast any favours. 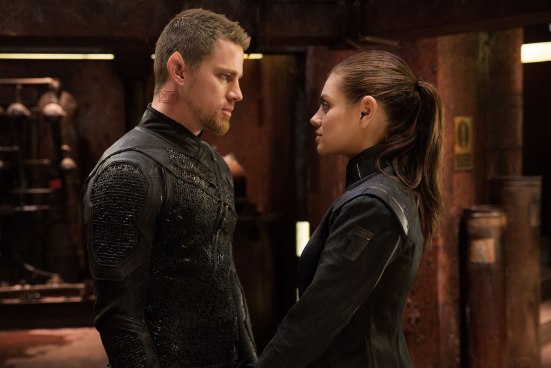 The cast try to do their best with the roles that they were given, but sadly most of them didn’t much to go since a lot of the characters were either poorly written, underdeveloped or didn’t add anything to the story at all (talent actors like Gugu Mbatha-Raw, James D’Arcy and, especially, Doona Bae were complete wasted in their thankless roles). Even the main cast even struggled with them as well. While both Channing Tatum and Mila Kunis did okay for most part in their lead roles, I just didn’t find their characters all that interesting (although when it came to the more bad arse aspects of his character “Cain Wise”, Tatum did deliver on that front). Plus it didn’t help that they didn’t really have much chemistry with each other and their character’s romance felt really forced. There are a lot of bad performances among the supporting cast (all the actors who played Jupiter’s family were awfully cartoonish), but there’s no question that the worst performance in the entire belongs to Eddie Redmayne. His performance as “Barlem” was so hilariously awful that I honestly felt really bad for him. I don’t know if it was how the Wachowski’s directed him or if the performance was all his doing, but it was so bad that I couldn’t stop laughing (the audience in saw it with, also laughed as well). Just seeing him do scenes where he’d be talking in a very soft, low whispery voice and then all of a sudden, screaming at the top of his lungs like he was a child having a tantrum. Also every time the camera does a close up of his face, he seriously looks like he is about to cry. Redmayne’s hilariously bad performance is worth just checking out for this film alone.

Now despite all the bad things I’ve said about the film so far, I must shamefully admit that I actually did kind of fun with it because of its badness. Don’t get me wrong all the flaws that I’ve mentioned in my review so far are all completely legit but at the same time, it’s all those awful aspects that did make me enjoy the film on a so-bad-it’s-fun level. Every decision that the Wachowski’s made from both a directing, performance and screenwriting standpoint is so buffering and non-sensical, that I kind of have to admire them for all the craziness that they put in the film (plus you can go wrong with the villain having dinosaur-like creatures as henchmen). Plus the Wachowski’s approach to the film is so sincere and non-cynical that I just can’t really hate them for how the film turned out. But that’s not to say that there weren’t actual positive aspects of the film. Even though their script was a mess, the Wachowskis still delivered on a technical front. The film looks visually spectacular and the world building was pretty well done. While the action sequences weren’t as innovating or exhilarating as this previous films, but they were mostly solid and some were set pieces were well staged. Also the production/costume design was terrific, the makeup effects were creative and unique, Michael Giacchino’s score was solid, John Toll’s cinematography was visually great, the CGI effects were really good and, of course, you can’t go wrong with having the awesome Sean Bean in your film (who gives a solid performance, even if he’s character doesn’t make any sense).

3D Note: I did see the film in 3D and I thought it was pretty solid. Especially during the action/space scenes.

Overall while there’s no denying JUPITER ASCENDING is a pretty bad film (honestly I wouldn’t blame people for flat-out hating it. I was the same too on the first watch) but if you go in with the right frame of mind, you might have a bit of dumb fun with it (especially if you’re someone who enjoys fun bad movies like I do). While it’s not quite up there with other classic so-bad-it’s-awesome films like TROLL 2 or THE ROOM, but it’s a film that  I could see becoming your new favourite guilty pleasure. However if it doesn’t get you even on that level, I wouldn’t blame you for simply hating it too. For me personally, I think I may have found my early contender for my special “best worst film” award for my worst films of 2015 list.