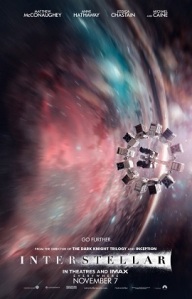 I’m not going to lie: every time that a new Christopher Nolan film is released, it becomes like a huge major event for me. I’m an unabashed fan of him as a director and I pretty much-loved all the films that he has made so far (even his lesser works are still pretty damn great). So you can safely say for certain that was absolutely excited for his latest film INTERSTELLAR, which seemed like that it would be right up my alley with the type of sci-fi films I love. But did the film manage to live up to my very high expectations? Read on and find out!

Set in the not too distant future, the film tells the story of Cooper (Matthew McConaughey) a widowed former NASA engineer/pilot who now works as a farmer in a small country town with his youngest daughter Murph (Mackenzie Foy), oldest son Tom (Timothee Chalamet) and step-father Donald (John Lithgow). Unfortunately the world is slowly dying due to a massive amount of drought, famine and climate change. One day Cooper meets Professor Brand (Michael Caine), who tells Cooper that he wants him to be involved in a special mission. Fearing that humanity will soon face extinction due to the devastation that’s happening on Earth, NASA has organised an expedition into space to find another planet that can sustain human life. To achieve this, they’ll have to travel into a wormhole that was discovered near Saturn a couple of years prior. Cooper agrees to join the mission and along with his fellow astronauts (Anne Hathaway, Wes Bentley, David Gyasi) and some robots (voiced by Bill Irwin and Josh Stewart) they set out into the wormhole to find a new home and save mankind.

I should state before I continue this review, that I’m going to try my best to be vague and not spoiler any major plot details that happen during the film as possible (believe me, there’s a lot more to plot than what I described). As a matter of fact, I was actually thinking of not writing my review of the film until after I saw it again. The reason being that just like Nolan’s other previous films, this film was so over-powering on the first watch that you need a second viewing just to fully process it. I figured that by doing that, I thought my review would actually do the film justice. But in the end I decided that I would write it anyway. So what did I think of it? Like I said earlier, I’m not going to spoiler anything in the film. But what I can say is that while it does have its flaws (which I’ll get to later), Christopher Nolan’s latest film is still an absolutely fantastic and truly epic sci-fi film that had me enthralled from beginning to end. Seriously, I was in completely in awe by everything that I saw in this film, that I found my experience with it to both quite powerful and overwhelming (it probably helped that I saw the film in IMAX, which is the format that I highly recommended).

As you would have expected, this film proves once again why Nolan is one of my favourite directors working today. His direction here is absolutely fantastic. The film looks and sounds spectacular in every way. Plus every scene and set piece is just brilliant directed and staged. This is definitely without a doubt the most ambitious film that Nolan has done yet. Not just in terms of visuals, but also in both themes and ideas that it wants to explore (whether they were explored in a satisfying way will be debatable among those who will see the film but for me personally, I thought Nolan did quite well most part). Also while some people might think that some of the dialogue is just the characters are just spouting scientific theories and exposition (which is something that Nolan has been accused of doing a lot in his films), but honestly it never really bothered me at all. In fact it made the film even more interesting since I didn’t really know much about this stuff (theoretical physicist Kip Thorne, whose scientific theories were used as the basis for the film, was brought on as both a consultant and executive producer to make sure that the film as accurate as possible).

But what I think really made INTERSTELLAR work for me, besides it being an epic sci-fi film of course, is that the true heart of this film is definitely the relationship of “Cooper” and his daughter “Murph”. It’s these two characters who give the film its emotional power (it reminded me of how the father-daughter relationship was done in the 1997 underrated sci-fi classic CONTACT). Luckily Nolan brought a great cast together fill these roles. Matthew McConaughey gives fantastic performance as “Cooper”. It’s was truly great to see him bring the same incredible acting chops that he has brought his roles over the last few years to this one. He brings a true every man quality to the role that makes the character both real and relatable. Plus he is backed by great supporting cast (Anne Hathaway, Jessica Chastain, Michael Caine, Ellen Burstyn, Casey Affleck, John Lithgow, Mackenzie Foy, Wes Bentley, David Gyasi etc.) who also all do an equally great job with their roles as well. The standouts definitely being Hathaway, Chastain and Foy, whose performances added even more emotional weight to the proceedings (I don’t want to forget Bill Irwin too, who brings a lot of the film’s humour as the voice of the ship’s robot “TARS”). Also the script by Nolan and his brother Jonathan Nolan is pretty strong, the score by Hans Zimmer is both amazing and sublime (it might be the best score I’ve heard so far this year, it’s unlike Anyang he has done before), Hoyte Van Hoytema’s cinematography is absolutely jaw-dropping (especially seeing in IMAX, which was truly wow), editing by Lee Smith was terrific (for a film that is nearly 3 hours long, it’s extremely well paced and it doesn’t drag at all), the production design was great and the visual effects were absolutely astounding (I loved old-fashioned some of them were executed).

Now even though there’s a lot that l loved about this film, I will admit that the film is quite flawed in some ways as well. The major one being is that there is a plot development that happens during the third act that I didn’t think quite worked at all. Before this event happened, the film’s first two acts felt both organic and made sense where it was going plot wise. But once this event happens, it just came across as both completely clichéd and contrived. It’s felt that Nolan and his brother added it in to script so that it would add a bit more dramatic tension to the story, but to me it just wasn’t needed at all and it took me out of film. Plus it didn’t help that the scene was going back-and-forth to another equally clichéd and contrived scene that was happening at the same time in a different place as well. Also there’s something that happens towards the end of the film that I honestly found to be very bizarre. I can understand what Nolan was going for this scene, but I’m not sure if quite works (I need another viewing of the film to know how I feel about it). You know what I mean when you see it. Plus the first act is structured quite strangely as well (I could say how, but again I don’t want to give anything away. Let’s just I didn’t see the point of it being done that way) and while the supporting cast all did a great job with their performances, I did feel that some of them didn’t have much to do because I felt their characters were a bit underdeveloped.

Overall while INTERSTELLAR doesn’t quite get there as the masterpiece that could have been, but I still found it to be an absolutely terrific and thrilling film nonetheless. Yes, it is flawed but just like many other a films of its type in the past, a film as ambitious as this one was never going to be perfect (nor should it be). But regardless of that, I still loved it warts and all. Seriously, the fact that Nolan went out a film like this, should be admired and I’m grateful that he did (we need more ambitious films like this one in cinemas). It won’t be for everyone (the third act will definitely puzzle some people) and I can understand why it’s gotten mixed reviews, but it’s still one that I highly recommended everyone to check out. This is a film that needs to be seen on the biggest screen you can find (if you’re near an IMAX, go see it!) and, like I said earlier, it’s also one that I feel that you need to see more than once. I for one can’t wait to see it again!