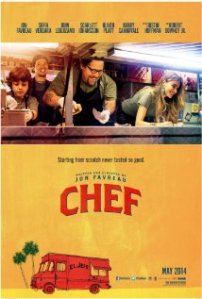 Jon Favreau is a name that is now most closely associated with IRON MAN having directed and acted in the first two films. He did start off his career as an actor and made the transition into filmmaker. With CHEF he takes on the role of star, writer and director, and with all his experience and talent, he’s made a wonderful film. The man must be given credit for stepping away from the big Blockbuster film and heading into something that is completely different and has that feel of an indie film. It feels like he has gone back to his roots, and he’s telling a story he is really passionate about.

CHEF is about Chef Carl Casper (Jon Favreau), he works at a restaurant where he is the main chef. He wants to spice things up at the restaurant to impress food blogger Michael Ramsey (Oliver Platt), and spice things up because life just isn’t too happy for him. After the food blogger doesn’t have nice things to say about the typical meal, and things go viral, Casper becomes an online hit for all the wrong reasons. This sends him to his all time low, losing his job and struggling to connect with his son Percy (Emjay Anthony). Things change however when his ex wife Inez (Sofia Vergara) invites him to Florida to spend time with their son. Carl decides to do something insane and he buys a food truck, something that may have the answers to his life.

This is a film with a lot going on, it really is a character driven film so a lot of time is spent on Carl and his life. Why he’s not a happy man, and what deep down he really wants out of life. He’s quite scared to actually be happy and do things for himself that his relationship with his son isn’t fantastic, they are almost strangers at times. At its core this is a film about the father and son relationship, and we get to see a lot of time with these characters as they want to connect but things don’t seem to go right until that fateful trip to Florida. We also have Carl’s other relationships to experience and see, including that with his best friend Martin (John Leguziamo) and ex wife Inez. There is a natural chemistry between all the actors that make their characters really work together. Carl and Inez are complete opposites but in the way they interact there is a spark there and a closeness that we can see, they do deeply care for each other but don’t know quite how to express it. Something we can guess may have perhaps been the reason the marriage didn’t work. 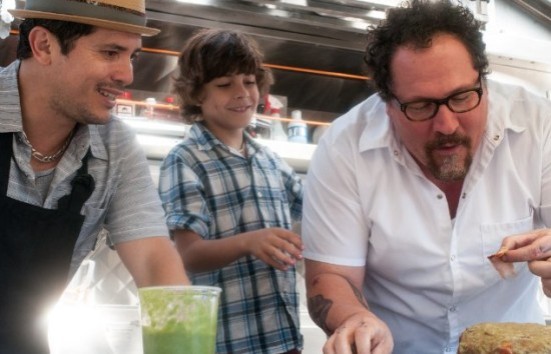 The two works in two parts, before the food truck and with the food truck. Because there is a lot of build up as we get to know the characters, some of it does feel a little clunky and the pacing isn’t entirely steady. Once we get to the food truck though the pacing definitely finds its feet, and it flows much better as a film. The film perhaps is a little over long, but the care for these characters is why I would guess it is this length. The passion is there for the film, and I think Favreau wants the audience to get as much out of it as he has. CHEF blends drama and comedy quite well, the characters are very likable and I think we can all relate to Carl on some level. The father and son relationship is the heart and soul of the film and it is the one relationship we the audience really want to see work.

Social media and social networking plays a big part in this film, it is something that Carl and Percy end up bonding over and it is something that turns Carl’s life upside down. Some may say the use is overkill but I didn’t see it that way. Social media is a big part of our lives today, most of us use it and it can be a way to help with business. People will look back at this film in 10 years and see just how big social media was in our lives and how it helped or ruined things for us. Another element that worked here and gives a flavour to the film is the atmosphere and music, the 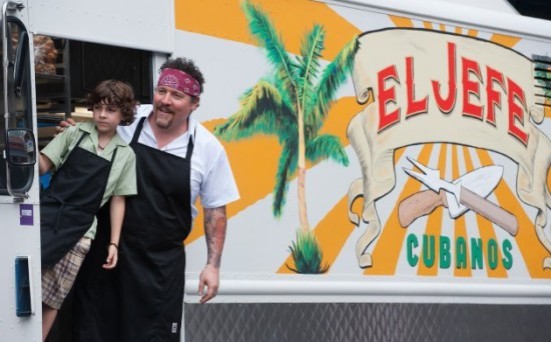 I enjoy Favreau as an actor and he was very good here, the flow felt natural for him as Carl. It’s a role he felt comfortable with and he really embodied everything that came with it. I bought him as the character and I felt his unhappiness. Credit to the man for making a three dimensional character all the while still directing the film. He chose his cast very well, Emjay Anthony was perfect as Percy and the rapport between the two felt like that of father and son. Emjay was a big stand out in the film, he’s very natural and will win everyone over. John Leguizamo can be a hit and miss actor, but he does shine here. This was a role he clearly enjoyed and he had natural chemistry with those around him. Sofia Vergara is a very talented actress and she was very good here, again the chemistry was perfect and I think she played off well with Favreau. Dustin Hoffman, Bobby Cannavale, Scarlet Johansson and Robert Downey Jr appear and one just can’t complain about seeing them.

I thoroughly enjoyed this film, it is a very fun ride with lots of ups and downs. It is full of amazing looking food, and I would advise lining up some good food for after the film because you will be hungry. Favreau has made a great film, he’s a more than competent filmmaker, it looks amazing and it hits us where it matters. The message here is about finding happiness in the simple places and not being afraid to go for your friends and being with those who mean the most to you. CHEF will no doubt be one of 2014’s hidden gems.