Last week I discussed what made Tom Savini a true Legend of Horror from a view of his make-up effects contributions to the genre.  Well, it just so happens that Mr. Savini has far more to offer than just that.  He’s also made some solid work as an actor and even as a director.  The man’s talents know no bounds.  Today, I’m going to finish off my tribute to the man by highlighting his acting and directing efforts.

Night of the Living Dead

This was the first remake of the original classic and by far it’s the best attempt at it.  The original B&W 1968 film is a true classic of the genre and Savini pays tribute to that in spades.  It’s nearly a shot for shot remake, but he makes some key changes that I personally liked.  Barbara is no longer the crazed girl who lost her mind.  She’s a smart woman that is willing to fight to survive.  Savini manages to get the most out of his actors.  Tony Todd, Patricia Tallman, Tom Towles all give great performances and even Bill Moseley shows up for the fun as Barbara’s brother Johnny.  While not the classic that the original is, this movie definitely deserves a look.

Other works include: Tales From the Darkside(tv series), The Theater Bizarre and Deadtime Stories.

Romero’s Of The Dead series

Tom Savini not only did the make-ep effects and stuntwork for George A. Romero’s Dawn of the Dead, he had an acting role in it as well.  As the lead biker in the gang that attacks the mall in the finale, he gets the chance to shine in some very memorable scenes.  But what makes this stand out more is that he became the first actor to come back as the same character in a later Romero zombie flick.  In Land of the Dead, Savini’s biker character returns.  Only this time, he’s a zombie.  It was a pretty awesome Easter Egg for fans of the series and genre.

From Dusk Til Dawn

This is my personal favorite role Savini has ever played.  The biker known simply as Sex Machine is all kinds of bad ass.  Whether he’s stealing a beer from another biker with a whip like a more heavy metal Indiana Jones(said biker is none other than Greg Nicotero), shooting a vampire with his crotch gun(Nice!), or beating wholesale ass on multiple vampires, he’s a ton of fun to watch.  And it’s easy to see how much fun he was having with the role.  As a bonus, this role made him a favorite for Robert Rodriguez.  He’s appeared in numerous other Rodriguez flicks ever since. 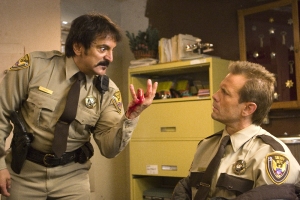 Though his part is pretty small in Planet Terror, he does provide a memorable presence.  Playing a deputy who has his finger bitten off by a zombie, Savini’s part is pretty much all about kicking the crap out of as many zombies as he can.  Once he puts his wedding ring on his middle finger he starts mowing the undead down.  His brief appearance was a lot of fun, and seeing him interact with the great Michael Biehn was a blast.

Other notable works include the Machete series, Django Unchained and Martin.

Tom Savini has had a truly amazing career and deserves to be celebrated.  Whether he was creating amazing practical make-up effects, directing one of the better remakes out there or showing up as a character to make a movie even more awesome he always adds weight to whatever movie he’s involved with.  The man is a true Legend of Horror and I can’t recommend seeking out his work enough.  The man is my hero.

Next week, I’m going far more old school.  Trust me, next week’s Legends of Horror will have a lot more bite to it.