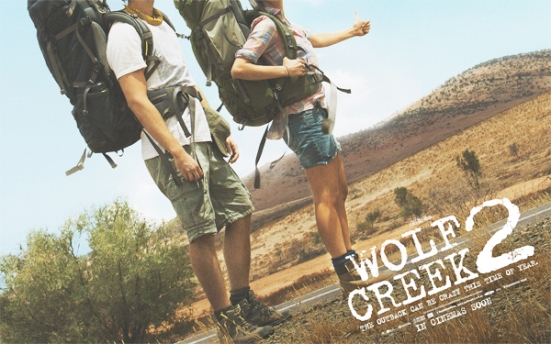 SM.com was lucky enough to grab an interview with writer Aaron Sterns, co-writer of WOLF CREEK 2 and author of ORIGIN: WOLF CREEK.

Sit back and relax and take a read about these two subjects and definitely go and check them out!

Marcey Papandrea: Hello Aaron, thanks for taking some time out to have a chat with me, it is much appreciated! Getting right into it, Wolf Creek 2 – the long awaited sequel to 2005’s horror hit. When did you get involved with the film? 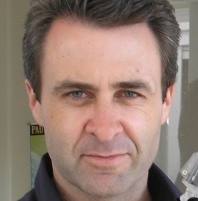 Aaron Sterns: Right at its inception. Greg McLean and I shared a writing office at the time he wrote the first Wolf Creek, and being the horror guy I gave my thoughts on the script (as reward, I had a little cameo in the movie as one of the nasty truckdrivers in the roadhouse). Once the film was released, Greg and I threw around ideas for a sequel every so often until we hit upon something we thought was big enough to justify for Wolf Creek 2. So he sent me off to write it. Greg went off to direct his second feature Rogue (for which I was script editor), and a few other projects, but Creek 2 always stayed in the background. When he came back to the project we passed drafts back and forth until he and Screen Australia were happy, and then eventually came the magical moment I visited the set and saw characters I’d created years before strolling down a blocked-off highway (before eventually being slaughtered — which I felt a little guilty about, watching them).

M.P: What was the writing process like for the sequel? Did Greg Mclean have a clear idea of what he wanted with a sequel?

A.S: The treatment took a few months, but once the structure was right I actually wrote the first draft quite quickly (in a fever-dream two week stay at exec producer Matt Hearn’s Victor Harbor holiday house, cementing the South Australian connection). It’s all about getting that underlying structure right — which in Wolf Creek 2 is a sleight of hand influenced by the horror theory I’ve studied and taught surrounding the undermining of generic structures and playing with the audience. We wanted the sequel to be bigger and scarier, sure, but also not simply a rehash of the first movie. Instead, we could play with people’s expectations of how it will play out, then take a left turn and follow a different path.

M.P: The film (no spoilers) is very different from the original, the formula changes. Were you both concerned about changing things up – or did it feel the right thing to do to distinguish the sequel from the original?

A.S: Everyone knows (or should know) coming into Wolf Creek 2 that the first movie languidly follows three backpackers who encounter a seemingly-helpful outback bloke who drugs them and attacks them one by one in his camp. Hopefully people expect that formula, because we set it up similarly (following a pair of backpackers) then discover they’re not our real focus.The very structure is a gamble, but I feel it sets this movie apart from other sequels that try to recreate the success of the original. And Mick Taylor’s in it a hell of a lot more.

M.P: John Jarratt is extremely scary and somehow a very fitting actor as Mick Taylor. Did he have much of a role in terms of the creative process for the film and for Mick?

A.S: Well, in the early days it was just myself and Greg. However, I know in rehearsals John brought a lot to the role and improvised quite a bit of the diaologue. No one knows outback vernacular as well as John. He did contribute a plot point in the film too — I had Mick driving a banged-up ute after Paul following the siege at the farmers’ house, but John hit upon the idea of Mick commandeering a horse and then “whipping the shit outta Paul”. I thought that was a cool addition and threw it in. 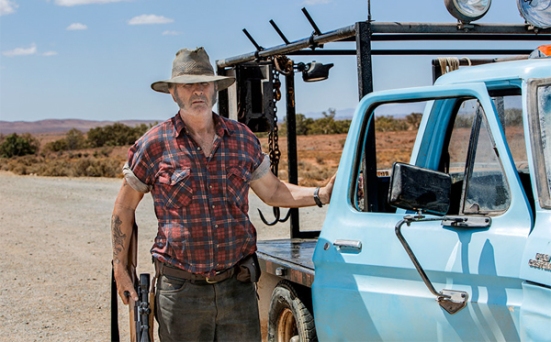 M.P: Moving on to the book, Origin – Wolf Creek is the first of what we hope to be many Mick Taylor stories. How did this all come about? Personally at Oz Horror Con last year I was pleasantly surprised to find out about the book series!

A.S: As far as I know, Penguin Books Australia initially approached Greg about novelising the films, but then the idea that the novels could be a series of prequel stories was floated (which is an unprecedented venture in Australian horror film and fiction). Being the co-writer of the film — but also a fiction writer as well — naturally Greg approached me first, as no one knows Mick Taylor better outside of himself and John. I initially refused as I was working on my own novel at the time, but then I realised it was a great opportunity to not only write a great Australian serial killer novel (which I’ve always had an interest in), but a standalone great Australian Gothic novel that could have an impact whether you’ve seen the film or not. So I said I’ll take the origin story, as that’s the juiciest.

M.P: How much did you have to work with in terms of structure and background information for Origin? Did you come up with Mick’s early years backstory?

A.S: Greg and I outlined a basic arc for all six books right when the idea was first put to him. So when I agreed to the first novel we knew that it would cover Mick’s childhood as well, and that he probably had an abusive (or at least domineering father), but it was all fairly broad ideas. Before I started plotting Greg handed me a half-page logline that was basically “A twenty-something Mick Taylor’s wandering the desert when another serial killer takes him under his wing and trains him to take out the other killers in the outback”. From there I had free reign to create the entire backstory, and it was soon furiously unfurling in my head as often happens. I thought it would be more interesting if Mick was seventeen/eighteen and trying a last ditch effort to integrate into society. I place him in a cattle station where he’s been employed as a cattlehand, having to deal with the many sometimes-acerbic personalities of the other workers, and trying to control the bubbling emotions from a traumatic upbringing threatening to overwhelm him — which they eventually do. I also thought it would be interesting to give him a love interest who might have the potential to redeem him — or may inadvertently corrupt him. And I also thought it would be interesting to run a parallel storyline where he’s a kid dealing with the grisly death of his sister, and a father suspicious of his role in it.

M.P: You have mentioned John had some input with the book and the many stories he had. What was it like researching the book with him on board also?

A.S: Well, the first thing I did when accepting the contract is sit down with John for a few hours to listen to his take on Mick’s psychopathology, as he has some great insights into Mick’s behaviour. It was during this meeting that he mentioned a couple of anecdotes about his time growing up in central Queensland, and gave me permission to use them in the novel. A friend’s father was a dingo hunter, for instance, so it immediately sparked in my mind that Mick’s father could be a dogger too, tapping into that casual exposure to death and violence his entire life. I also did a quick road trip through Queensland to soak in the environment, important for a Melbourne lad immersed in the city day in and day out.

M.P: Mick seems to have had a very rough life, but in the book there are signs of humanity in there. Did you feel it was important to make him a person rather than a monster? Those are usually the scariest of them all in my opinion.

A.S: There are no monsters. There are only people. This novel was a bit of a risk, in that we’re seeing the events through a serial killer’s eyes. But even if we don’t ultimately sympathise with Mick (because we know what he becomes in the films), at this early stage I hope there’s interest in what happens to him, and perhaps even a conflicted desire to want him to succeed. I like ambivalence, and I like playing with the audience’s sympathies and expectations. There’s a scene that opens Wolf Creek 2 that should similarly play with the audience’s identification — is Mick a villain or a strange type of hero? (Hint: he’s a villain.) It also allows us to examine his upbringing — was he inherently evil or did his upbringing steer him down the path? I’m actually not sure the novel answers or needs to answer this question. It’s up to the reader to decide.

M.P: There is a character in the book called Opey, who manages to even disgust Mick. Please tell us how this character was thought up, I find him grossly fascinating.

A.S: I just thought it was important for Mick to have a friend at the cattle station. Unfortunately Opey’s a bit simple and something he does (one of John’s anecdotes) distances Mick from him, adding to Mick’s pulling back from society.

M.P: Lastly, what do you hope the views of Wolf Creek 2 and the readers of Origin take away from each piece?

A.S: They’re quite different in tone. The film is much more action-based, and a lot more darkly humorous. I hope audiences are thrilled and lots of people see it, naturally. The novel’s a little closer to my sensibility though, in that it’s a lot bleaker and suffocating. I hope it’s compelling and shocking and confronting, but that people like some of the nice prose too. ‘Cause I worked hard at it.

M.P: Thank you for your time Aaron!

WOLF CREEK 2 hits Australian cinemas on February 20th through Village Roadshow. ORIGIN: WOLF CREEK is available now through Penguin and can be found at most book retailers: www.wolfcreek2.com.au