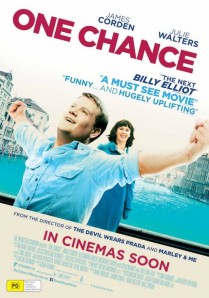 You know as someone who is usually very clued into everything that is pop culture related, there are times where some things can slip by me on occasional that I actually feel like I have been hiding under a rock while all of it was happening. One in particular is the story of Paul Potts, who was the very first winner of the reality talent show BRITAIN’S GOT TALENT. I must admit that I honestly have never heard of him until just recently when I found out that his life story has been made into a film called ONE CHANCE. Since I enjoy a good a good rags-to-riches story, I was very curious to check it out. Now you’re probably wondering if this guy’s life is worth making a film about? Well, read on and I’ll tell you!

The film tells the true story of Paul Potts (James Corden), a shy young man living in a working class town in England who, ever since he was a child, has dreamed of becoming an opera singer. As he tries to follow his dream, he unfortunately faced so much bad luck through-out his life that it stopped him from achieving his goal. One day he finds out about a new talent show that is starting up called BRITAIN’S GOT TALENT, he decides to give one last shot at making it as an opera singer.

I should start off by saying that everything that you expect this film to be like (whether you’ve seen the trailer or read the synopsis above), is 100% exactly like you imagined it to be. Yes, it is very formulaic, it’s clichéd to the max, it’s full of stock characters that we have seen in other biopic/rag-to-riches stories before and it’s predictable from start to finish. However while it is all those things, but I still quite enjoyed it nonetheless. It’s a nice, fluffy, inoffensive, witty and enjoyable British comedy/drama that’s both full of heart and charm. I must admit I was worried that the film would basically be a glorified commercial for the TV show BRITAIN’S GOT TALENT (especially since Simon Cowell, who is both a judge and creator of the show, is a producer on this film) but luckily that aspect *MINOR SPOILERS* really come into the story until the last 15 minutes or so *END OF SPOILERS*. Instead the film focuses on Paul Pott’s life and struggles that he faced while to achieve his dream.

To me the true heart of the film is definitely lead star James Croden, who gives a wonderful and sympathetic performance as “Paul Potts”. Corden really gets us emotionally involved into Paul’s life and hardships that he had dealt with while trying to make his dream come true. Seriously, you can’t help but root for the guy to succeed during this film. I think that without Corden, I don’t think that would have been as effective as it was. Also the supporting cast all do a really good job as well, even though they play characters that we have seen many times before (Colm Meany as the unsupportive Dad, Julie Walters as the very supportive Mum, Mackenzie Cook as the kooky best friend etc.). However the one that stood out for the most was Alexandra Roach as Paul’s girlfriend “Julie-Ann”. I haven’t seen her in anything before but I thought she quite a lovely and appealing performance. Yes, it’s a clichéd supportive girlfriend but I thought she brought a lot of heart to role and she also really good chemistry with co-star Corden.

One of the things that surprised me the most about the film was, despite being a very British film, that directed and written by two Americans. Director David Frankel (who directed THE DEVIL WEARS PRADA, MARLEY & ME and HOPE SPRINGS) and writer Justin Zackham (who wrote THE BUCKET LIST) both could have easily Americanized this story but surprisingly they don’t do that at all, it definitely feels like a very British mainstream comedy through-and-through (whether that is a good thing or a bad thing I’ll leave up to you). Yes, Frankel’s direction is serviceable at best and Zackham’s script is clichéd beyond belief but at the same time, it works for the type of film that this is. Also the film has a really good soundtrack and the opera scenes were done quite well (the real life Paul Potts actually did all of Corden’s singing).

Overall while ONE CHANCE isn’t a great film by means and it’s nothing that you haven’t seen a million times before, but I still found it to be a quite a funny, touching, feel good crowd pleaser that I did quite enjoy from beginning to end. I can understand why some people might not like it but I think if you give it a fair go, I think you might enjoy it as well.